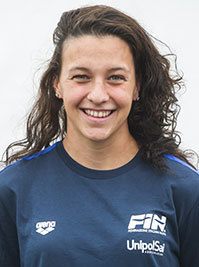 The two swimmers have a history of big open water battles that repeated itself on Sunday in the Seychelles. Archive photo via Federazione Italiana Nuoto

In the Seychelles, the site of the 2020 World Junior Open Water Championships, an international field gathered, including big names from Italy, Brazil, France, and Australia, among other places.

The women’s race came down to a finish between two of the world’s greatest open water swimmers: Arianna Bridi of Italy and Ana Marcela Cunha of Brazil. Both swimmers are arguably better in the 25k (where Bridi is the defending European Champion and Cunha is the two-time defending World Champion), but both have also had success in the 10km race too.

In fact, at the 2017 World Championships, the two were declared to have tied for bronze in the 10km race.

The two had another race down to the final touch, but this time Bridi was able to create just-enough separation to be declared a winner, officially by a tenth of a second, over Cunha.

That tenth-of-a-second was worth $500 on the difference between first and second. France’s Lara Grangeon, who has made a strong shift of focus to open water after a decorated pool career, finished 3rd, 7 seconds behind. That is her first Marathon Swim World Series podium finish.

Bridi rode at the back of the pack for the first few laps of the race in what was a huge field of 33 swimmers: twice as big as last year’s field.

“I wanted to start at the back and save energy drafting in the pack and then work my way forward when I was ready,” Bridi said of her race strategy. She, and the rest of the Italian team, arrived 10 days early to train and acclimate to the conditions. “This race was very important to me, in Doha [the first leg of the 2019 FINA Marathon Swim World Series] I didn’t have a very good race, so I was very happy to have a good result today. At the finish, I was next to Ana Marcela and I know she is a real champion and very good at sprinting, so I just had to push & push right till the end”.

Meanwhile, China’s Xin Xin led the pack for most of the first 3 laps of the race before eventually fading to 18th place. But as the pace picked up on the 4th lap, Xin Xin faded, while France’s Aurelie Muller and Bridi makingn their way into the pack. The aggressive Cunha lurked near the front for most of the race, just a week after winning the US title, and said that the the grind of travel and racing will help prepare her for the World Championships, where she will swim all 3 available races: the 5km, 10km, and 25km events.

The 1-2 finish in the men’s race wasn’t quite as close as the women’s race was; however, the 4-man battle to the finish was still thrilling between 4 open water monsters.

At the finish, Marc-Antoine Olivier of France was able to get just-enough separation to come out 2 seconds ahead of the photo-finish between Nicholas Sloman of Australia, Kristof Rasovsky of Hungary, and Ferry Weertman of Netherlands.

That group includes 3 of the top 5 finishers in the 10k from the last World Championships, with Weertman, the defending World Champion, finishing 4th of the group. Some playing with the field wound up not working for him at the finish – he pushed the pace early in lap 4, to try and break up the lead pack, after sitting in the back for most of the first 3. He then turned on to his back, allowing Rasovsky, Sloman, and Olivier to take to the front, and retiring back into the pack. Those 3 continued to push the pace, which really thinned out the lead group, and Olivier eventually would establish himself as the front-runner, which he carried to the finish in a very fast final lap (the opening mile was done in 19:54, and the closing was done in 18:24).

“It was difficult with the hot weather, I’m very happy to win,” the champion Olivier said after the race. “At the finish, I was thinking about my last heat swimming a 100m race and think about the pain in that race. The Seychelles is beautiful and yesterday I enjoyed myself swimming in the sea with many fish.”

For Sloman, who didn’t even qualify for Australia’s roster for the 2017 World Championships, this is a big finish in what is becoming a breakout year for him. He won the Australian title by 5 seconds, and though he was just 7th in Doha, he was still within 8 seconds of the winner, Florian Wellbrock of Germany.

“These hot conditions really suited us Australians and you could see that with where we finished,” Sloman said, referring to 4 Australians in the top 7 finishers. “Coming into the finish line I wondered ‘how am I here’ with the other top swimmers, but I just put my head down and went for it.”