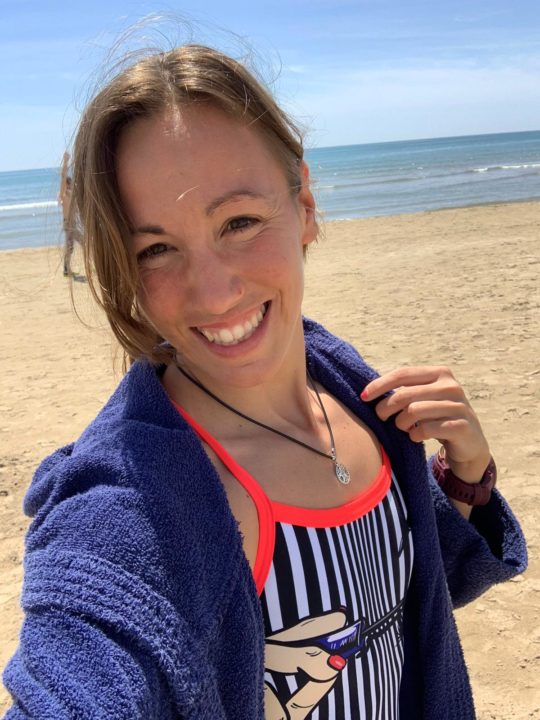 arena Spain swimmers share how they spent confinement. Starting this Monday, all of Spain will remain or move onto Phase 1. Archive photo via arena Spain

Hong Kong native Chun Kong Mak has successfully completed the 21-mile swim across the English Channel after recovering from coronavirus.

Per Spain’s Official State Bulletin (Boletín Oficial del Estado, BOE), published May 3, during both phases 0 and 1 in the de-escalation process, starting Monday, May 4, professional athletes were allowed to train individually or with a coach, so long as this is performed outdoors and within the limits of the province in which they reside. For this reason, some Arena swimmers, after almost two months of dry land workouts, decided to resume contact with swimming by way of open waters.

“After 50 days I had lost all sensation with the water. In fact, I wanted to feel the water so much, that I put the wetsuit aside and jumped into the water with only my swimsuits,” Vall said. “During this reencounter, I have not done any stipulated training, but swimming softly, calmly, diving, all with the sole objective of feeling the water. After regaining the sensations I did something more aerobic, but I think a  1500-meter swim is fine after so many days.”

For others, these quarantine days have led them to become creative with their training at home

“I am lucky to have been confined in my family home in Mallorca and although I have easy access to the sea, right now the waters are still cold and I prefer to wait until I can return to the high-performance center, where, in theory, I will be able to jump into the water,” says Joan Lluis Pons, 2016 Olympian and fourth-place finisher in the 400-meter IM at the 2019 Gwangju FINA World Championships last summer.

“I’ve been confined in Huelva with my parents. I live in a small flat so I have not been able to access any swimming pool to specifically train but I have continued with physical preparation out of the water, using above all a treadmill run that we luckily had here,” World Junior record-holder in the women’s long-course 400 IM Alba Vazquez told SwimSwam.

“Short term goals include regaining sensations in the water after 2 months without swimming, and in the long term, returning to the shape where I was prior to confinement in order to resume the Olympic goal,” Vazquez indicated when asked about her objectives upon returning to the pool.

The case is different for swimmers who train with their club teams, such as Rio 2016 Olympian Marc Sanchez.

“Now that everyone has started exercising, I would also like to be able to resume water training, while we do not have more information about the opening of the facilities, I will start using neoprene and throw myself into the sea to be able to resume training and make up for lost time as soon as possible. ”

For open water swimmers Alberto Martínez, who qualified for Tokyo in Gwangju, and Paula Ruiz Bravo (Junior Open Water World Champion) and newcomer to the arena team in Spain, the hope was to join the high-performance centers upon reopening.

Fortunately, while both awaited confirmation as to which communities moved onto Phase 1 and during which high-performance centers were allowed to reopen their doors under some restrictions, the sea served as their medium, where they resumed their training May 4.

“I spent confinement with my family and here access to swimming in the sea is easy so May 4 I started swimming,” Martinez said. “Now that they reopened the high-performance center in Barcelona I have been able to return to pool training.”

“These nine weeks have been very hard since I could not train in good conditions since even having some sports equipment and an exercise bike,” Ruiz said. “The pool is my medium, and what I did is not even equal to 10% of what it should have been; I have been helpless in this situation and the only thing that I can contribute positively that I have come out stronger psychologically in this situation.”

Miguel Duran is a national record-holder in the 400-meter freestyle and a Rio 2016 Olympian.

“Although I have begun to resume contact with water in a dam near my hometown, I had never spent so much time without swimming hence the return to training will be calm and gradual,” Duran said.

In light of a downsize in the number of new confirmed cases and deaths related to the COVID-19 pandemic, the two major High-Performance Centers, located in Barcelona and Madrid, were allowed to resume. The aquatics facilities were allowed to reopen following a request issued by the Royal Spanish Swimming Federation (RFEN), which was approved by the Spanish Sports Council (CSD).

Both Madrid and Barcelona entered what is known as “Phase 0.5” last Monday, allowing for the reopening of some establishments, although gymnasiums were not allowed to reopen.

Starting this Monday, all of Spain will remain or move onto Phase 1.

Since 1973, arena has created and marketed waterwear products for competitive swimmers and swimming fans worldwide, and is universally recognized as one of the premium brands of high quality swimwear and equipment. Over the last 45 years, arena has developed strong expertise in creating best-in-class products with particular focus on the pool segment, while also expanding into leisure and beach wear. Today the arena brand has a presence in 116 countries around the globe. In an historic agreement signed in early 2014, arena became a principal sponsor and technical partner of the swimming world’s governing body, FINA (Federation Internationale de Natation). arena sponsors 57 individual athletes and 29 national federations, including USA Swimming, as well as NCAA Division 1 swimming programs for Stanford, University of Texas (Women), Auburn, NC State, and University of Virginia.