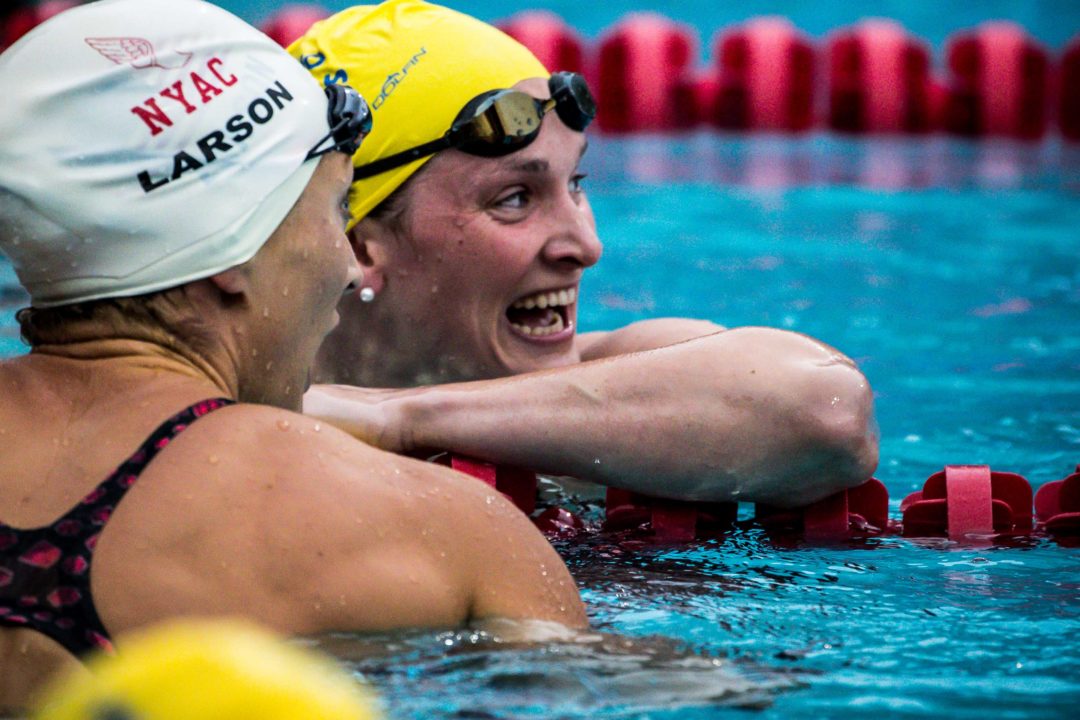 After losing her dad less than a year ago, Annie Lazor has made her first US Olympic Team via a first place finish in the 200m breaststroke. Archive photo via Jack Spitser/Spitser Photography

For the two teammates, the race proved to have an ideal finish, as King has been a source of support for Lazor amidst her father’s death. According to the NBC broadcast last night, King drove over 5 hours to attend the services for Lazor’s father and told Lazor’s mother that she would do “whatever it takes” to get Lazor on the Olympic team.

As the pair stepped on the blocks in lanes 4 and 5, King could be seen mouthing “we’ve got this.”

Following her initial reaction to winning, Lazor shared an emotional embrace with King, yelling, “We did it.” Lazor then took to the laneline, splashing the water in celebratory fashion.

During the post race interview, Lazor repeatedly thanked King for helping her through training and for supporting her.

In undoubtedly the most emotionally-charged finish of the meet, training partners Annie Lazor and Lilly King went 1-2 in the women’s 200 breaststroke to officially punch Lazor’s ticket to Tokyo, with the 26-year-old claiming the win in a time of 2:21.07.

That showing falls just three-tenths shy of Lazor’s best time, set in 2019, and propels her into third in the world this season.

King took it out early, grabbing the lead with a 31.66 opening 50, but Lazor, Emily Escobedo and Bethany Galat stalked her down the second lap, and at the 100 turn, it was a four-way scrap.

Lazor blew by everyone on the third 50, splitting 35.97, and then extended the gap coming home for the victory.

King made a big push on the last length, pulling away from Escobedo and Galat to snag second in 2:21.75 and add a second event to her Tokyo schedule. This is King’s first “loss” in an Olympic Trials final, having gone 3/3 up until this point (I don’t think she minds). King added a few tenths to her best of 2:21.39, set in May of 2019.

Lilly’s cocky persona always rubbed me the wrong way. Not anymore. This is the real Lilly King. Wow.

This is just another example of the fact that if you choose to follow and immerse yourself in the teachings of GOAT Coach & new ASCA Hall of Famer, Ray Looze, you will achieve greatness and immortality and enjoy moments like this!

King is finally showing her good side

Disagree. NBC is finally showing who she really is.

Lilly ONLY has one side…A Good Side!

I’m a grown man and I’m still reduced to tears by this hours later. What a beautiful moment for the Indiana Hoosier Swimming family!

2 finals tonight where teammates were
1 and 2. Young kids can learn a lot from this. Teammates push each other to make each other better. While this realization comes with maturity, I wish I saw it more at the age group level. Competitiveness does not have to equal bitterness. Had this talk at practice today.
So many lessons learned from watching Trials!

I was thinking the same thing—not only pushing each other, but truly supporting each other—got them on the team together. I saw the same spirit with the Cal backstrokers’ joyous celebration for one of their own. Beautiful.

I think we all really appreciate seeing this side of Lily. I absolutely loved seeing the way she supported her in that race. What a fantastic relationship they have and what an incredible story for years to come.

“We did it” Annie Lazor to Lillie King. There is nothing else that has to be said. I don’t have to watch the rest of this meet. I had tears totally…..