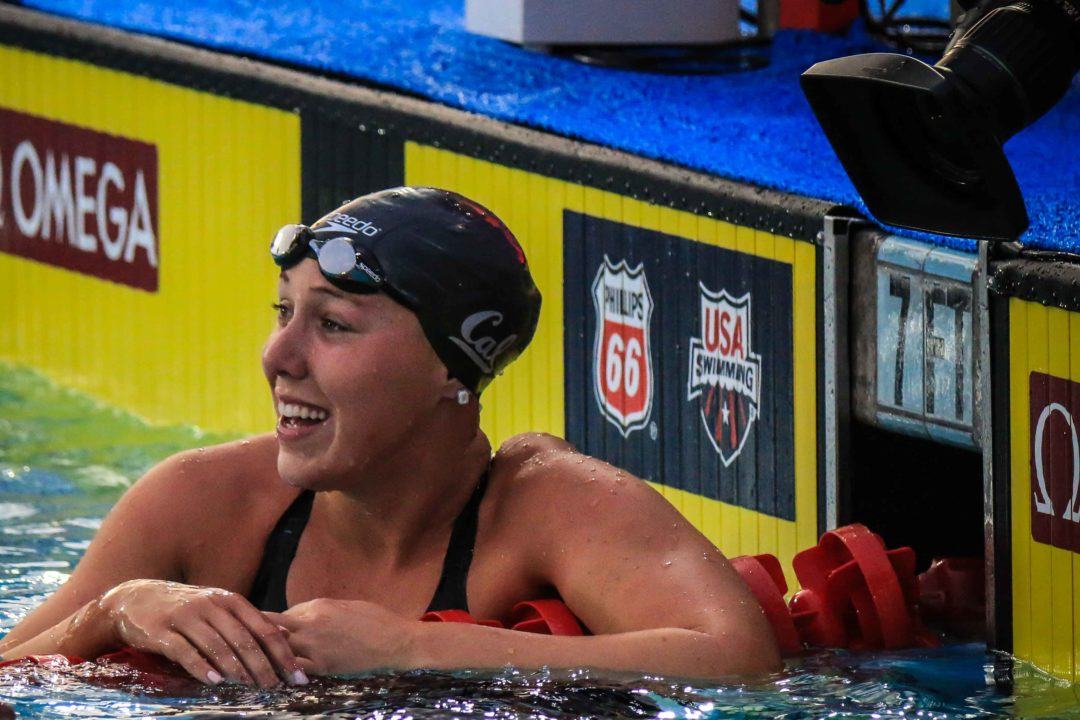 Abbey Weitzeil won four out of five individual races today and was crowned the Queen of the Pool. Archive photo via Jack Spitser

KING/QUEEN OF THE POOL

At the annual kick-off event for Cal Berkeley and Cal Poly, the king and queen of the pool were named in a pentathlon of sorts. All swimmers race a 100 of each stroke, plus a 100 IM, and mixed 200 medley and free relays were also contested.

KINGS AND QUEENS OF THE POOL

Andrew Seliskar, to little surprise, utilized his incredible versatility to sail to the crown, while Abbey Weitzeil, who is strong in more than just freestyle (she swam breast on Cal’s 200 medley relay last year at NCAAs), earned queen status on the women’s side. Neither of them are repeat champs from last year, as Matthew Josa won the men’s title and Kathleen Baker the women’s.

The mixed 200 medley relay saw Cal put teams in 1st through 4th place. The Bears’ G team won the event in 1:38.12, keying on a 24.57 breaststroke split from Whitley. 200 free relay results are not yet published on Meet Mobile.

Notably, freshman Cassidy Bayer was listed on Meet Mobile as ‘Cassidy (in water) Bayer.’ While she did swim the fly leg of a 200 medley relay and also the 200 free relay, this probably means she did not dive from the blocks and started from the wall instead for her individual events. She also did not race the 100 breast nor the 100 IM (everyone, assumed healthy, raced all strokes), meaning she may be continuing to deal with knee issues that have hampered her the last couple of seasons.

Additionally, All-Americans and seniors Amy Bilquist and Katie McLaughlin, as well as freshman backstroker Alex Sumner did not race for Cal.

If Bayer swam 56 from a push, that is really strong

Do they keep records of the fastest composite times from year to year?

No, but it wouldn’t be hard to compile.

I would guess the format has changed slightly since they’ve been doing it, but wouldn’t be certain without looking. Usually these kinds of meets will shift theories, sometimes doing 50s, sometimes 100s, etc.

Not a good look when your best breaststroker is STILL Weitzel….

Awesome. I thought Seliskar graduated. One of the most versatile swimmers ever.

It would be great to see those two have strong seasons.

This is the meet where I think they swim the 5 events in about an hour. It’s just for fun