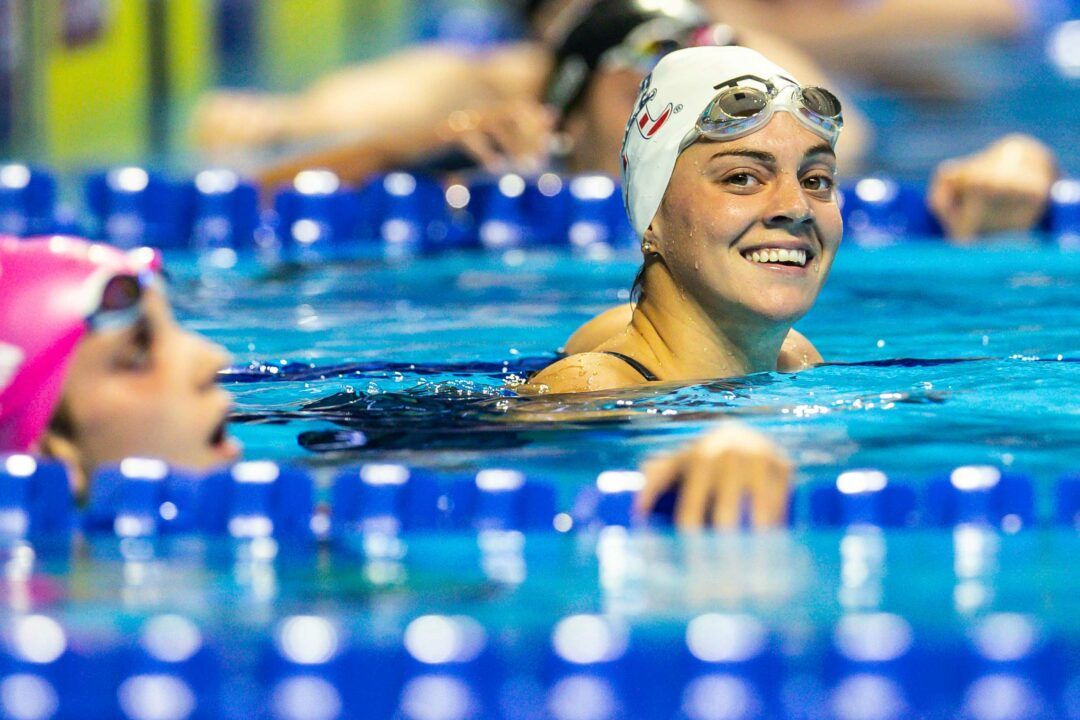 The University of Alabama women won their third relay in four tries on the penultimate night of finals at the 2022 SEC Championships, edging out Tennessee to break the conference record by more than half a second.

The Crimson Tide got a huge lead-off leg from Rhyan White, who won the 100 back earlier in the session, as the senior catapulted the team into a big lead with a 50.44 opening leg.

White was followed by freshman Avery Wiseman (58.02), senior Morgan Scott (51.07) and junior Cora Dupre (47.11) as they combined to win the event in a time of 3:26.64, breaking their own SEC Record of 3:27.18 set earlier this season at the Tennessee Invite. That team featured White, Wiseman, Scott and Kalia Antoniou.

One thing that really stands out about Alabama’s swim is their reaction times. Wiseman had a -.02 reaction, Scott was -.01 and Dupre was .00 for a combined -.03 on three exchanges. Compare that to Tennessee, who had a combined .90 reaction between their three takeovers.

‘Bama also combined to have a -.02 reaction in their winning 200 medley relay, with Wiseman controversially listed at -.07 (anything lower than -.03 is supposed to be a disqualification), though it was ultimately ruled a touchpad error.

In the race, the Vols were only 22 one-hundredths back of the Crimson Tide for the win, meaning Alabama essentially won the race with their exchanges, and by a wide margin. Had Alabama had the same reaction times as Tennessee, they would’ve finished in 3:27.57.

Tennessee’s Ellen Walshe threw down a blistering 49.75 split on butterfly, which put the Vols into the lead moving into the freestyle leg before Tjasa Pintar was overtaken by Dupre.

That is going to catch up to Bama one day

When you refer to Alabama’s 200 Medley Relay and say (in reference to Wiseman’s RT) ” it could be a touchpad error,” this is misleading. It *was* a touchpad error. Not a possible error. An actual error. That was the official decision after a review of the video evidence.

Yeah, and the only video not online. Shocking.

1) it’s not the only video not online
2) Is your implication that Texas A&M and Georgia are conspiring to protect Alabama from relay DQs?

The explanation for why it’s not online is pretty straightforward: the two teams posting race videos didn’t have relays in that heat.

reaction times continue to be insane