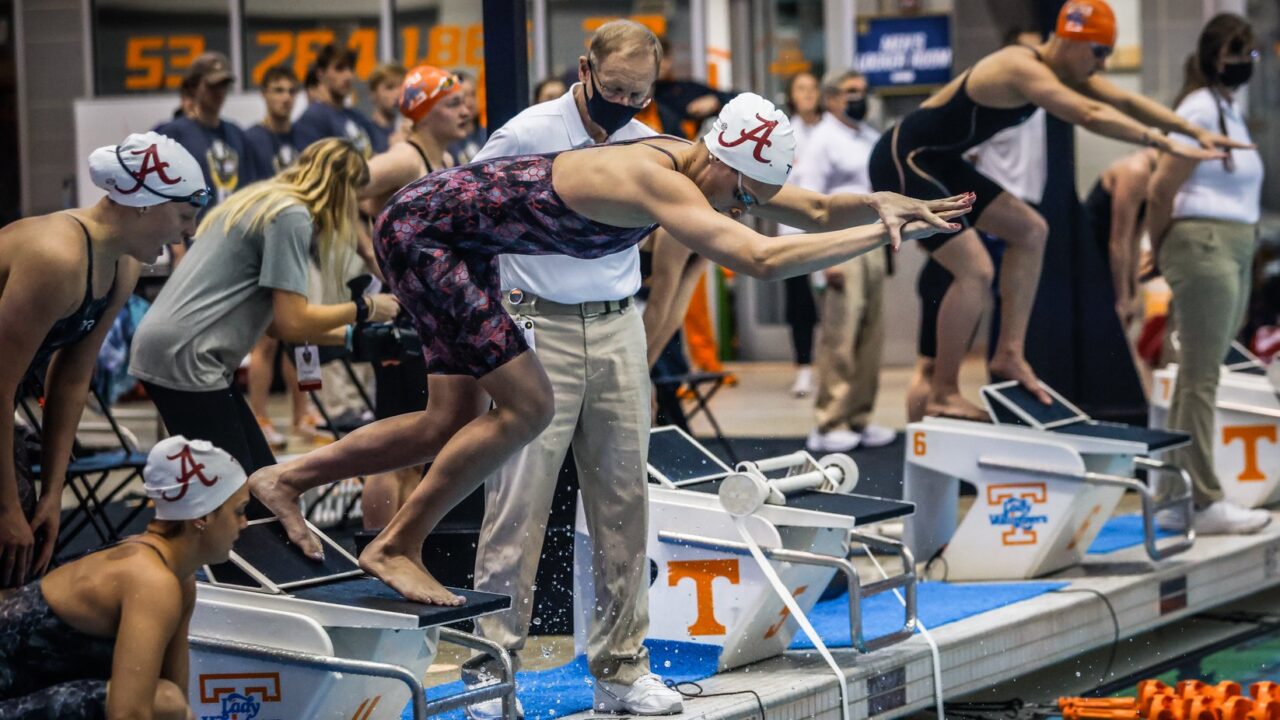 While the touchpad registered a DQ'able reaction time of -.07 on the breaststroke leg of Alabama's 200 medley relay, video review overturned the call. Stock photo via Alabama Athletics

When the Alabama women broke the SEC Record in the 200 medley relay to open up the 2022 SEC Swimming & Diving Championships, the relay exchanges stood out.

That means, according to the Omega Timing equipment being used at the meet, their aggregate reaction time was negative.

Wiseman’s -.07 is the split that stood out, because on a first pass, it should have resulted in a disqualification.

Rule 4, Article 6, Section c of the NCAA Swimming & Diving Rule Book says that the determination of the relay judging pads is official if the finish time is between -.09 and +.09 seconds from the manufacturer’s starting point. For Omega equipment, which is being used at this meet, that starting point is -.03, meaning that any reaction time between -.04 and -.12 doesn’t need human confirmation to be called, and is an automatic DQ.

If the electronic relay takeoff equipment detects an exchange differential (takeoff pad time minus finish pad time) of –0.09 through +0.09 second inclusive from the manufacturer’s starting point, the decision(s) of the human judge(s) shall not be considered. The determination of the electronic relay takeoff equipment shall be official, with exchange differential of –0.09 through –0.01 second from the manufacturer’s starting point indicating a rules violation and values of 0.00 through +0.09 second indicating a legitimate relay exchange.

Rule 4, Article 6, Section g, however, includes a caveat, that the RJP can be overturned if the referee declares a system malfunction, which includes the allowed use of video review.

The referee has the ability to declare a system malfunction and not count the electronic readings of a given lane if he has clear evidence that the system has failed. If using the video review system as described in Rule 4-14-7, the referee can review any malfunction. If video review is not being utilized, the referee can elect to not count the reading of an entire heat if the majority of lanes have malfunctioned. Eliminating the readings in one heat is limited to that heat only and all other heat readings remain valid.

The meet’s timing is being managed by Swiss Timing, the same company that manages timing in most sports at the Olympic Games.

Omega overhead cameras are being used at the meet, allowing officials to go frame-by-frame, and they clearly saw Rhyan White’s hand on the wall while Wiseman’s foot was still on the block. The SEC said there was a “soft touch that caused an improper reading, which constituted a system malfunction.”

The same system was used to correct the Kentucky women’s 200 medley relay time, which originally registered about a second slower before being fixed by the cameras, bumping them into 3rd place (and giving them an NCAA Qualifying Time).

Great coaching, guts, and performances to pull off those reaction times. That, ladies and gentlemen, is how it’s done.

Great follow up article! This is the kind of journalism I love SS for!

If this is the official stance, then there should be concern about a “soft touch” affecting final results (whether it be for placing and/or for qualifying times) in other swims

Milorad Cavic has entered the chat

hadn’t laughed out lout today, this got me.

The fact that the aggregate reaction time was negative is irrelevant to the legality of this swim. A relay doesn’t get DQ’d for having a certain aggregate reaction time. As you do an excellent job of explaining, because of video evidence, this particular swim was deemed legal, despite the -.07 reaction from one swimmer. Cheers!

these are honestly insane reaction times, props to the Alabama girls

i thought so too, but then if the -0.07 RT was wrong, why would the other ones be correct?

Checks out since 23.65 is also relatively pedestrian for White.

Can they provide the replay footage? Looked like a dq from the live footage