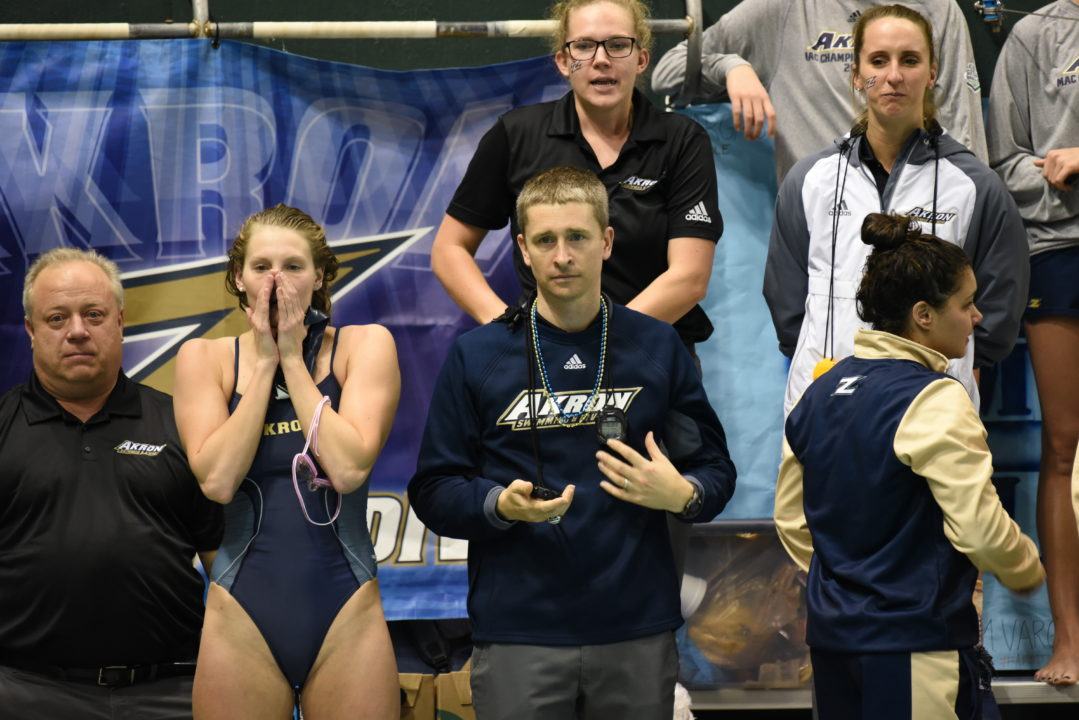 Past international swimmers such as Munoz, who’s hometown is Merida, Spain, have played a big part in Akron‘s success. Currently the team has eight swimmers from outside the United States from various countries including Canada, Poland, Spain, England and Sweden.

But Peresie is not just looking for talented individuals across borders.

“From a recruiting standpoint, we’re always trying to get the best local talent but then we’re going to recruit all over the country and all over the world,” Peresie said. “Our international swimmers have been doing really well and they bring diversity to our program. They have different training backgrounds which I always find interesting to hear their stories and to hear what their training is like and what got them to where they were before the came.”

Paulina Nogaj, a sophomore from Poland, and Sarah Watson, a freshman from Winnipeg, each have a chance at qualifying for NCAAs later this year. Peresie has sent an Akron swimmer to NCAAs in three of his six seasons at the school.

“I think each year, the squads gotten more comfortable in those environments and it’s something that we talk about it,” Peresie said. “I think if their minds are right and they feel comfortable no matter where they are or who they’re going up against, I think that puts them in a position to have a great performance.”

With only a few weeks left before MAC Championships and NCAA Championships, Peresie said he wants to keep his training format consistent.

“Depending on how they did at the [MAC] Championships, I coach off of feel as much as anything else,” Peresie said. “Sometimes it takes a few days, they come out off four and a half days of racing. They’re doing a lot of speed work, a lot of quality efforts. We get back to, some people call it flushing it out. I don’t know if I’ve come up with a term for it or not.”

Peresie also said that each swimmer is unique and different, so he’ll cater workouts to whoever that is. For example, last season before NCAAs, Munoz and Nogaj lifted weights on Tuesday in Columbus since that makes the two feel stronger, according to their head coach.

But choosing when to lift can be one of the challenges Peresie said. It’s something that he talks about with the strength coaches and he is determining whether or not he wants to get in an extra lift before the MAC Championship.

“If they’re out of the weight room, their last lift might be a few days before we leave of anything that’s excessively heavy,” Peresie said. “Basically they have a week off, they come back in and get in the weight room and then all of a sudden they can be really sore. I don’t want them to be so sore they can’t move for four or five days. But we need to get back into that.”

Lifting in between the MAC Championship and NCAAs is monitored closely by the head coach too, depending on what events his swimmers qualify for.

“But in terms of that training in between, we’ll ramp it back up depending on what their events are,” Peresie said. But at the same time I don’t want to overreach so they can’t move the next three or four days. Then it’s just really getting the mind right and believing that they can go fast.”

Coach Brian is an EXTREMELY talented qualified coach. He has found the perfect balance of hard work, discipline, and fun.
He has also done so well, that high level international athletes want to swim for him.
As he says…”Happy Swimmers, are Fast Swimmers” other coaches should take note. AKRON has the most fun while swimming FAST. He’s on to something! Congrats Coach Peresie! (6-Peat)

Truly amazing what Coach Peresie has done with this program