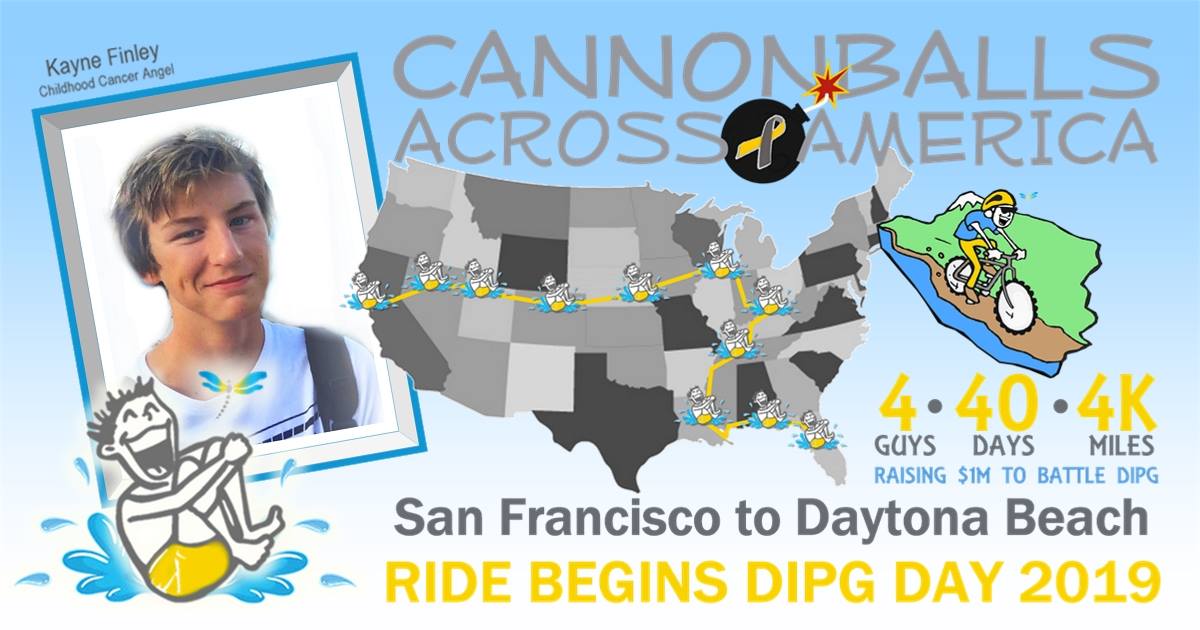 Swimming always had a place close to Kayne Finley’s heart. He first started swimming when he was three years old and swam in high school and with his club team year-round.

When he was diagnosed with DIPG (Diffuse Intrinsic Pontine Glioma), a cancerous childhood brain tumor, Kayne wasted no time and started the Cannonballs for Kayne Foundation. This helped raise awareness and funding for pursuing a cure for pediatric brain cancer with an emphasis on DIPG.

DIPG is the most underfunded and least researched type of brain tumor that less than 1% of people survive to four years post diagnosis.

Kayne passed away in November 2017 and his family and friends are honoring his memory through the Cannonballs Across America campaign.

This four person, 40 day, 4,000 mile cross-country bike ride is an “awareness campaign from California to Florida connecting families, children’s hospitals, churches, swim teams, bike shops and other organizations to educate about brain tumors and unite for a common cause,” according to their website. Their goal is to raise $1M to battle DIPG.

Zach Major, Robby Larson and Kayne’s brother Keagan were the initial riders along with Kayne filling in the fourth slot.

Major, who swam on the same team as Kayne and Keagan when they lived in Kentucky, knows that the foundation has some lofty goals.

“One million is ambitious for sure, especially with a first year program,” Major said. “We’re kind of having to do a grass roots following more or less. For the most part it has been difficult because we’re just not quite established yet at least.”

The bike ride began in California on May 17th, which is DIPG Awareness Day and the team has since made it all the way to Colorado.

Along the way, the group has encountered bad weather conditions like snow, sleet, hail and rain. Larson unfortunately had to go home due to altitude sickness and a former swimmer from University of Cincinnati, Justin Crew, will join the others on June 18th.

And on June 1st, Keagan had to get 16 stitches for a six inch cut on his leg from the gearbox on his bike at the Middle Park Health Medical Center, which is just outside of Denver, Colorado. Keagan said he would be back to riding again once the stitches are out in a few days.

The route the group is taking has some meaningful stops to it. They began in California since it was a place Kayne had always wanted to visit and to kick off the bike ride with a leading DIPG researcher, Dr. Michelle Monje. The route will also go through places where the Finley family had lived such as Ohio, Kentucky and Florida. It will also go through Baton Rouge, Louisiana, as Kayne was a freshman at LSU and where Keagan currently goes to school and swims for the Tigers.

Keagan said his family and those in the DIPG community are excited about the bike ride they are doing to raise awareness for this disease.

“This cancer is the least funded pediatric cancer and all of the cancer in general I would say just because it’s so rare and so complex not enough research people want to go research it and try to find a cure for it because it takes a lot of money to do,” Keagan said. “The fact is, at the end of the day, if they find the cure or something for this, they open doors for just about every cancer in the book.”

Keagan wanted to make one thing clear too. There’s a reason behind all of this, it’s for Kayne and all those other children who suffer from DIPG.

“We’re out here doing this to raise money and awareness for DIPG which is a pediatric brain cancer, not really out here to brag about how we’re biking across the country you know?” Keagan said.

Great cause and great people. I can’t wait to meet up with them along the route and put some miles on the road for a great cause!