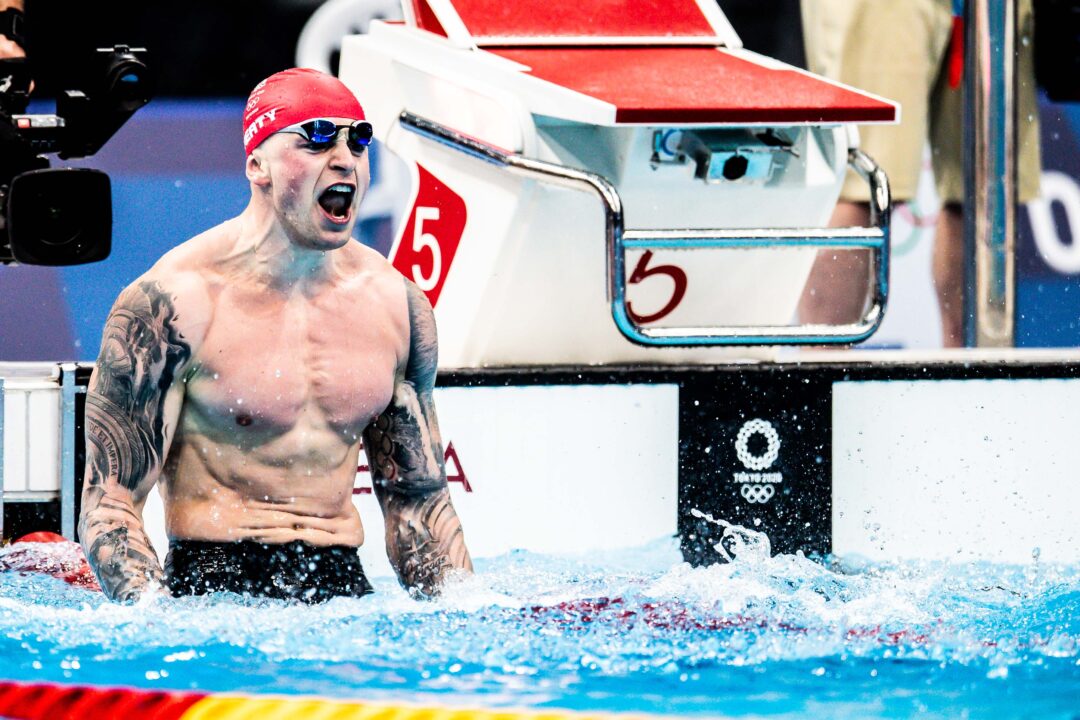 "I am quite confident, with my training and team around me, that we will be there and able to put up a good fight," Adam Peaty says of the Commonwealth Games. Archive photo via Jack Spitser/Spitser Photography

The men’s sprint breaststroke events at the 2022 FINA World Aquatics Championships were missing the reigning champion Adam Peaty of Great Britain. The 27-year-old father of one was sidelined by a foot fracture suffered in the gym just before Budapest, as we reported last month.

After six weeks out of the pool focusing on rehabilitation, the 3-time Olympic champion says he is nearly ready to defend his 100m breaststroke title at the 2022 Commonwealth Games in Birmingham coming up in July.

“I am 90% sure now,” Peaty told BBC Radio 5 Live. “I am quite confident, with my training and team around me, that we will be there and able to put up a good fight.”

Sandwell Aquatics Center, the newly-built aquatics competition site for the Birmingham Games, sits just 50 minutes away from where Peaty was born and raised.

“I grew up 45-50 minutes away from Birmingham,” he added. “I am a Midlands man – I was born and will probably die in the East Mids. To race in that arena, it doesn’t get much closer to home than that. It gives me goosebumps thinking about it.”

Although he missed out on Budapest this year, with a chance to defend his 50m and 100m breaststroke world titles, Peaty said of his situation, “This broken foot is one of the best things that has happened to me.”

“It has slowed me down, reminded me what is important, which is family and the support around you. But it has given me that drive, I don’t want anyone else to have those titles.

“I believe in the bottom of my heart that world records can be broken again and I am not finished yet.”

Adam Peaty is one of those driven swimming fanatics like Phelps that break world records and win all the gold medals.

He’s backed up his talk for years now, so let’s sit back and watch him put on a show at the Comm Games.

If he swims at Commonwealth, he probably has to be what, 58 high to win? Other than Wilby and ZSC, is there anyone else competing that could realistically go sub 59?

wtf are these comments.

Adam has no coherence in his sentiment to die “in the East mids”. Comments from him like that, among others found in the article, really give me the goosebumps.

I was talking about the swimswam comments.

We Ben Proud of you, Adam but this headline reads like the quote of someone who is sedated out of his mind off of painkillers; waking up every morning with an opiate hangover. Dopesick from treating the symptoms of a broken foot.

He’s a great swimmer but has never really connected with people.

Yeah he just chats shit at times, like he only broke a little bone in his foot. He was always going to get all the help he needs to recover, not like he is coming back after a long time off or a massive injury

He connects with the demographic he wants to connect with. He’s very patriotic, in a way that is not all that common among English swimmers today (Scots and Welsh slightly different) and is unusually unapologetic about it – there’s not much irony to his world view – the world’s there to be conquered and,by George, I’m going to conquer it, for queen and country! That’s not an attitude to pull in a global fanbase, but it plays well where he cares about it playing. A swimmer of his confident dominance is practically unheard of in GB, certainly since Wilkie (Moorhouse was relatively humble, while Adlington was mentally a hot mess, though hugely talented) – GBR athletics has actually come up… Read more »