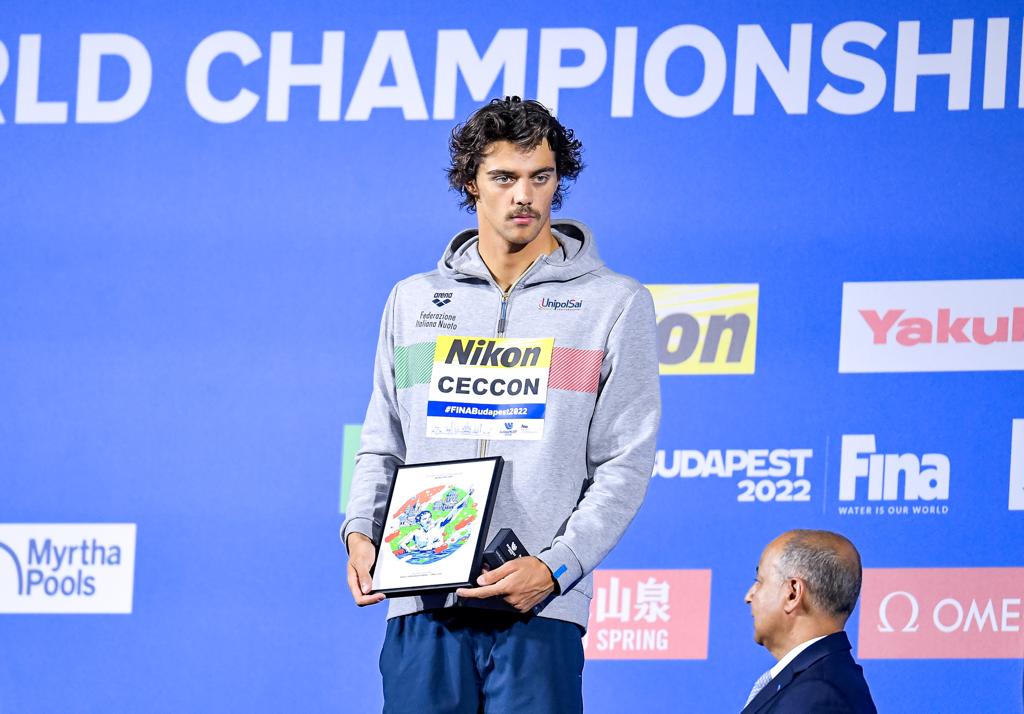 Thomas Ceccon (above) was awarded a $50,000 check, plus an NFT and a print of the digital artwork behind the NFT, for his World Record in Budapest. Archive photo via Fabio Cetti

World Record breaking swimmers Kristof Milak and Thomas Ceccon received their custom-minted NFTs, a physical print of the artwork from those NFTs, and their $50,000 checks on Saturday to conclude the swimming portion of the 2022 World Aquatics Championships on Saturday.

It does not appear that NFTs were awarded to the Australian mixed 400 free relay that also broke a World Record.

In the week leading up to the meet, FINA announced that in addition to the $50,000 prize money rewards, they would mint NFTs and transfer them to World Record breakers. The digital artwork for the NFTs were created by local Budapest-based artist Krizbo, who is not an NFT artist specifically, and minted by FINA.

Athletes also received signed prints of the digital artwork attached to the NFTs.

The above Tweet shows both Milak and Ceccon with their NFTs. Ceccon has sent SwimSwam a closer picture of his artwork, which includes the colors of the Hungarian flag (red, white, and green), plus two of the Budapest’s iconic buildings: the Hungarian Parliament building, and the Fisherman’s Bastion. The two artworks are very similar, except that the athlete who broke the record is featured in each, posed after the race. A mustachioed Ceccon points to the crowd in his edition, while the hometown Milak sits more passively and gazes high in his artwork.

NFTs are a relatively-new financial security developed in 2014 based on blockchain technology, the same technology behind cryptocurrencies like Bitcoin. Ethereum is currently the most widely-used crypto-currency technology in the NFT sphere. NFTs typically take the form of digital art, though they can be employed in other files too, like music, video game ‘assets,’ or film. While NFTs do not necessarily purvey copyright ownership to individuals who buy them, ownership to the digital file is unique and can be traced. What makes them different from the cryptocurrency that uses the same blockchain technology is that an NFTs’ value is largely based on the digital file or artwork it is connected to – compared to cryptocurrencies, where each Bitcoin, for example, is worth the same amount. That varying value between assets is what makes NFTs “non-fungible.”

Global cryptomarkets have been in a freefall, losing about two-thirds of its value (about $2 trillion in total value) since peaking in November 2021. While NFTs have not taken as big of a hit as compared to cryptocurrencies, this week has seen NFT markets begin to react to broader economic factors as well. A Bloomberg NFT Index that tracks the performance of NFTs fell 23% the week before the start of the championships, and the famous Bored Ape Yacht Club NFTs fell by 25%.

they are worth every cent you are willing to spend on them ……….. hahaha

Dang, they did him dirty. Makes him look like a middle aged out of shape lap swimmer.

Do relays get WR money or is that only individuals?

Did they specify that only individual World record holders would receive these?

The release specifies it now. I have no idea what it originally said.

“NFTs are a relatively-new financial security”

NFTs are speculative financial products – NOT securities. Through theft, price manipulation, and mania NFTs are not really “secure” in the slightest much less fall under the definition of a true financial security.

these actually look pretty cool! Hate the NFT part of it though

Maybe FINA should focus on swimming rather than Web 3.0

Next World champs gonna be in the metaverse, no cap

No nono, that’s the next ISL season.

Prize money given in crypto, everyone will be breaking world records so they can cash out before it’s worthless.