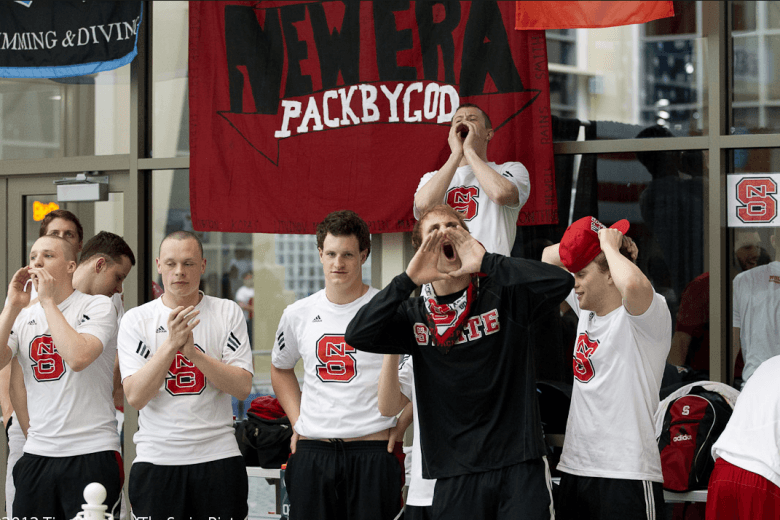 The ACC’s only competition this week was the All-NC Invite, which featured most but not all of the North Carolina teams (UNC being the obvious exception). NC State and Duke saw competition in the invite, where they finished first and third on the women’s side and first and second on the men’s side.

Notwithstanding a lack of heavy competition, NC State pulled off some strong swims regardless. A 22.9 anchor leg in the 200 free relay out of freshman Riki Bonnema is a promising sign for future sprint match ups. NC State defeated Duke in both sprint relays, fielding two relays faster than Duke in the 200. In that race, Duke only had two swimmers with sub-24 splits.

In the 200 medley relay, Duke finished just two tenths behind NC State, led by junior Christine Wixted’s 28.9 breaststroke split. She also helped carry them to a victory in the 400 medley with a 1:02.7. That kind of split makes you expect more than a 1:05 in the individual event, where she just barely edged out Lauren Poli of NC State. Wixted demonstrated rare versatility for a breaststroker, winning the 500 in a 4:57.

On the men’s side, it was Duke that defeated NC State in the 200 free relay, senior Ben Hwang running down the NC State anchor on the last leg to split 19.4 and give his team a win. He also won the individual sprint events in 22.0 and 45.0. As the distances increased however, NC State had the upper hand. Junior Jonathan Boffa won the 200 free in a 1:39.4 and was the only swimmer under 1:40. His teammates took spots 2-4 in that event. In the 500, a Wingate swimmer took the top spot but NC State demonstrated depth, occupying places 2-5. They were led by two freshman: Louis Wojciechowsk and Christian McCurdy.

All in all, a strong start to the season for both ACC teams that saw action. Expect competition to really pick up in this conference in the next month.