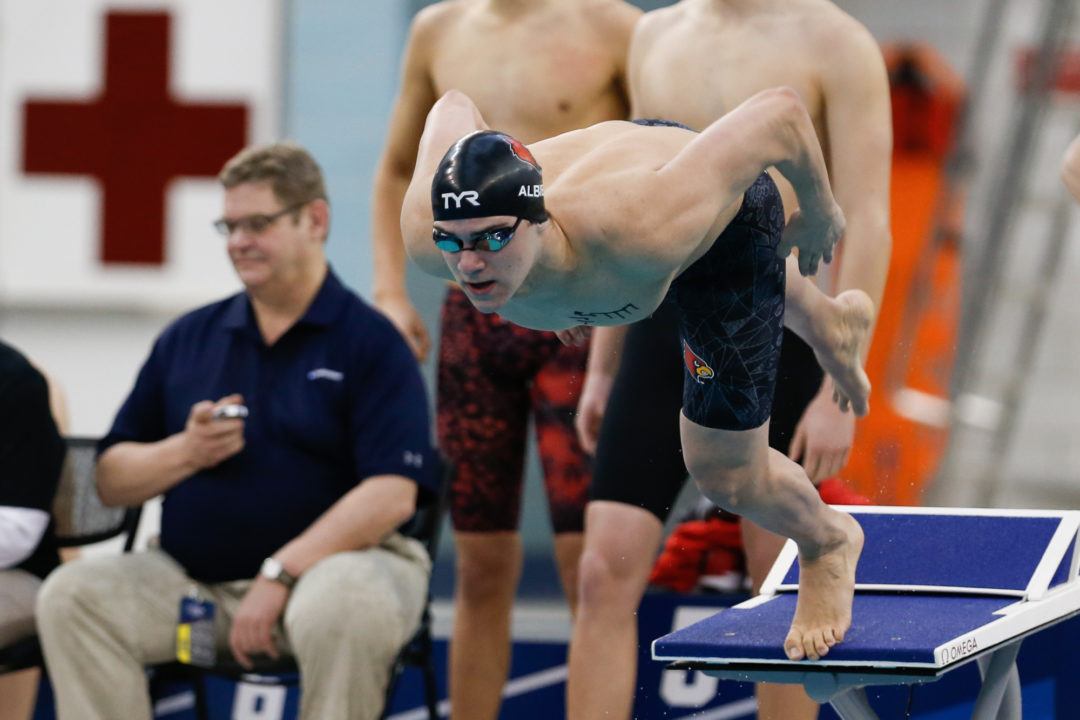 Two-time ACC 200 fly champion Nick Albiero defended his title against a stacked field as he won gold for the second year in a row at the 2019 ACC Men's Swimming and Diving Championships Saturday in Greensboro. Current photo via Tim Binning/TheSwimPictures.com

Two-time ACC 200 fly champion Nick Albiero erased his own one-year-old meet record as he won gold for the second year in a row in the final individual event of the 2019 ACC Men’s Swimming and Diving Championships Saturday in Greensboro. Albiero had a very impressive meet all around, also finishing 2nd in the 100 backstroke in a career-best time of 44.88, and 4th in the 100 fly in 45.37. All of Albiero’s times are NCAA ‘A’ cuts.

VT’s Antani Ivanov was out first with a 22.63, followed closely by Virginia senior Zach Fong. You could see Fong wanted to get after it, and he split 25.40 on the 2nd leg to put himself into the lead. He hung on through the third 50, but faded a bit down the stretch and ultimately finished 4th in 1:41.39.

Defending champion Nick Albiero split his race almost perfectly; he sat just behind Ivanov and Fong after the first 50, and then split 25.81/26.12/26.07 over the remainder of the finish to touch first in 1:40.70, breaking his own meet record.

Albiero’s victory and teammate Zach Harting‘s 5th place finish (1:42.10), coupled with the points from Daniel Sos‘s 17th-place finish, now put the Cardinals 13.5 points ahead of UVA in the race for 2nd. That should pretty well secure a 2nd-place finish for the Cardinals, barring some sort of relay disaster.

Louisville’s Nick Albiero punched his NCAA ticket by taking 4th in 45.37, just behind Henlsey. Keblish settled for 5th with a 45.51; that shaves 0.02s off the UVA school record, which he tied this morning. That record had belonged to Keblish’s teammate Zach Fong, who was right behind him tonight at 45.70, followed by NC State’s James Bretchser (45.88) and Pitt’s Blaise Vera (46.29).

NC State’s Nyls Korstanje took the B-final in 45.62, which should help solidify his NCAA invite, although his 19.29 in the 50 free may be enough to get him, regardless.

Stewart was out in 21.33 to his feet, almost four-tenths faster than this morning, but he couldn’t bring it home quite as fast, and ended up touching in the exact same time as he did this morning, 44.44. Albiero, also swimming his 2nd event of the night, stayed close the whole way, and touched in 44.88. Joe Clark of UVA was 3rd in 45.22. Albiero and Clark are now 4th and 5th in the country, pending results from other meets tonight.

I think it is just so cool that his Mom and Dad are his coaches!