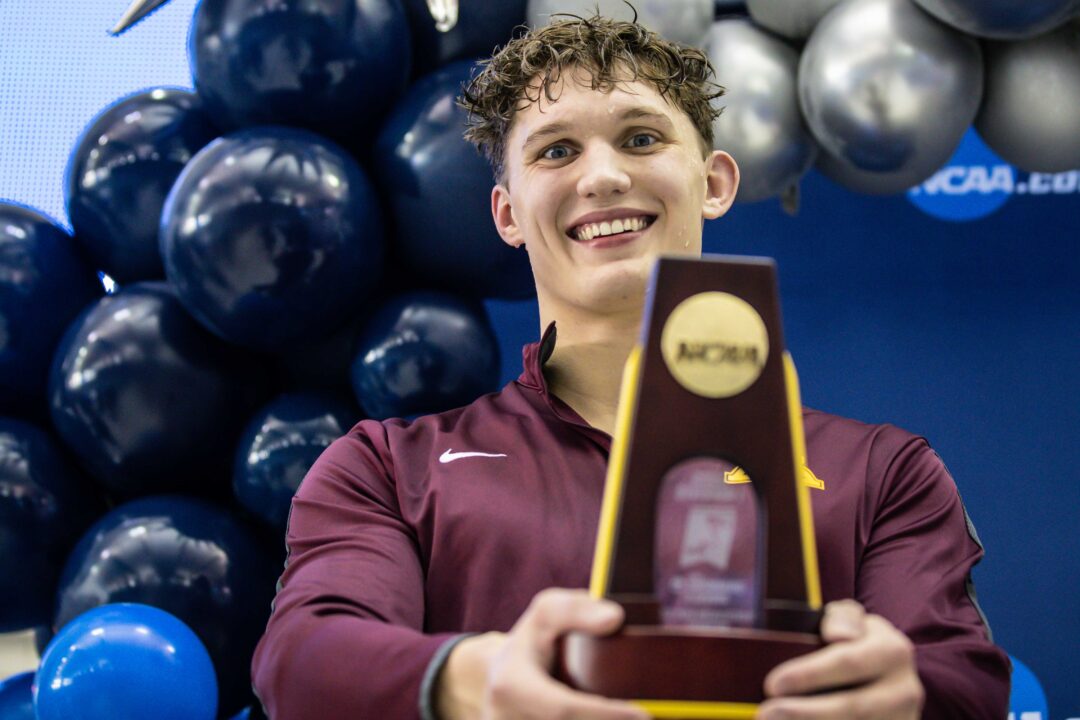 Two-time defending NCAA Champion in the 100 breast Max McHugh had as good of a shot as anyone as cracking the top two in that race at next week's Trials. Archive photo via Jack Spitser/Spitser Photography

The 2022 USA Swimming International Team Trials are on a unique timeline by American swimming standards. Though April trials meets coming out of the NCAA Championships are common internationally, in the U.S., athletes usually have at least a few months to regroup before setting out again for another taper meet.

This is also an opportunity for some athletes as well. Those collegiate swimmers who have exhausted their eligibility don’t have as difficult of a decision to make about hanging on for another month, just to see what happens.

We’ve compiled a list of swimmers who would have been high seeds and probable A-Finalists in at least one event who are absent entirely from the psych sheets. Not just absent in an event, but not participating at all.

SWIMMERS COMING OUT OF THE NCAA SEASON

Post-Grad SWIMMERS WHO HAVE STARTED ‘OTHER THINGS’

Liam Bell! He didn’t swim last summer (ankle injury or something) and didn’t compete LC but he’s always been a good LC competitor.

Big changing of the guard on the men’s side over the next few years.

It makes sense for the athletes to want a reset right now. Or to start a training block geared toward competitions late this year & next year and/or OTs & Paris. Or, whatever else.

The athletes themselves + their coaches, families, teams, friends etc. know what works for them and the reasoning behind it. We have no idea what’s happening in their lives, how Covid has effected things, etc.

No armchair commentator here has any place projecting or trying to make some uninformed judgement about the athletes’ reasoning for not attending this meet. So more athletes than usual won’t make Nationals/WC trials. And? These are not “usual” times.

I’ll never understand the “Preparing for next years championship, so I’m not gonna race this trials meet” mindset. Seen it a lot with the Australians over the years, remember Cielo saying it a fair amount.

Even if you’re not 100% sure in yourself to make the team, why not just try to make it? Worst case is you get racing experience in. Is skipping a 5-7 day meet really going to put you in a better spot for a competition 12-18 months out from now?

Tapering once sets you back at least 2-3 years.

Some say Lilly king never tapered all of NCAAs

Which Australians in the past? Unless you mean when they were having surgery (Chalmers in 2017) or looking after their mental health (Campbell in 2017).

True, but I could see Mr. Furosemide doing this to just get out of a few more drug tests.

Many of these swimmers are students who are a week away from final exams. Every national meet requires them to take approximately a week off to travel/compete. Imagine how difficult that would be as a full time student. Not ideal when there are ‘big’ meets every month or so. These student athletes devote much of their lives to swimming, and DO need a life outside of swimming. Please think before you judge their reasons for not competing in one single meet.

Kinda bummed, I was hoping some of the big name no shows here, or at least the big names at the tail ends of their international careers, would make an appearance at USMS Nationals in San Antonio instead. Haven’t seen any on the psych sheet, though.

I remember watching Grevers and Ervin at USMS Nats in San Antonio in 2015, it was a lot of fun to “race” them in their events!

The “big names” at USMS Nationals from a former international level in the younger age groups would be Josh Prenot, Tim Phillips, and Eugene Godsoe.

There are a nice variety of former D1 type guys scattered around the psych sheet too.

Wish I could have made it to that meet, it’s really deep overall. Good competition.

Where’s Nick Simons? He’s a national junior teamer who isn’t on the psych sheet. He made semi-finals at Wave II last year

Is there a total # athlete count somewhere?