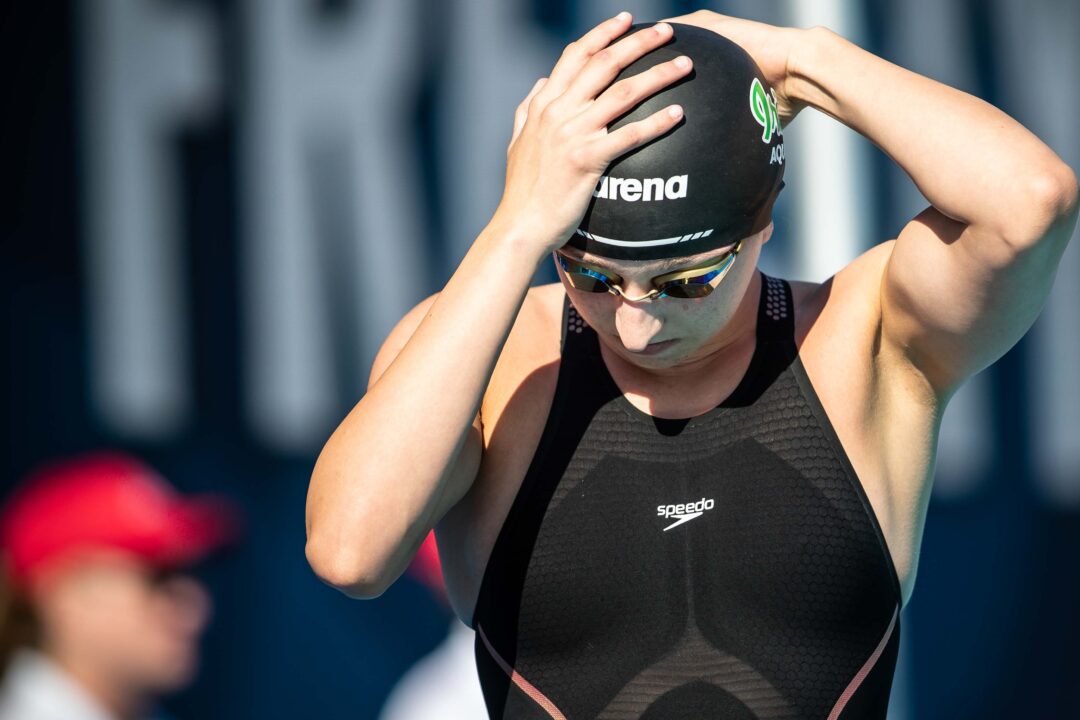 The NC State Wolfpack received a verbal commitment on Thursday from their second top 10 recruit in less than a week: Lily Christianson from Indiana. Archive photo via Jack Spitser/Spitser Photography

Lily Christianson, the #7 recruit in the high school class of 2024, has verbally committed to NC State University.

Entering her junior season, she is a two-time defending Indiana High School state champion in the 50 yard freestyle. That gives her the chance to become just the second girl to ever four-peat in Indiana in the 50 free, and 14th girl in any event. She is the Indiana state high school record holder in the 50 yard free, and is Penn High School’s first state champion in girls swimming since Bethany Galat – the 2017 and 2018 World Championships silver medalist in the 200 breaststroke.

Christianson was the #1-ranked 50 yard freestyle on NISCA’s High School All-America lists in 2022 as well.

Christianson’s clear best events are the 50 and 100 freestyles. Those are events where NC State has a huge reputation. Though their women haven’t been quite as good as their men, they scored 84 ACC points in the 50 free and 67 points in the 100 free at last year’s ACC Championship meet, which ranked them 2nd behind only the champions Virginia across those two events. That includes Katharine Berkoff, who finished 3rd at the NCAA Championships.

What’s not quite clear yet for Christianson’s future is what her third event will be at the NCAA level. That’s because she has good, but not great, tertiary times in the 100 back, 100 breast, 100 fly, and, not coincidentally, the 200 IM.

NC State had a late-break relative to some of their rivals (namely Virginia) in the class of 2024, but in the last week, they have scored a pair of top 10 commitment announcements to open the class. Besides Christianson, on Saturday, the #6 recruit in the class Erika Pelaez announced her commitment.

The UVA-NCST battles are going to continue to be epic. ACC looking strong