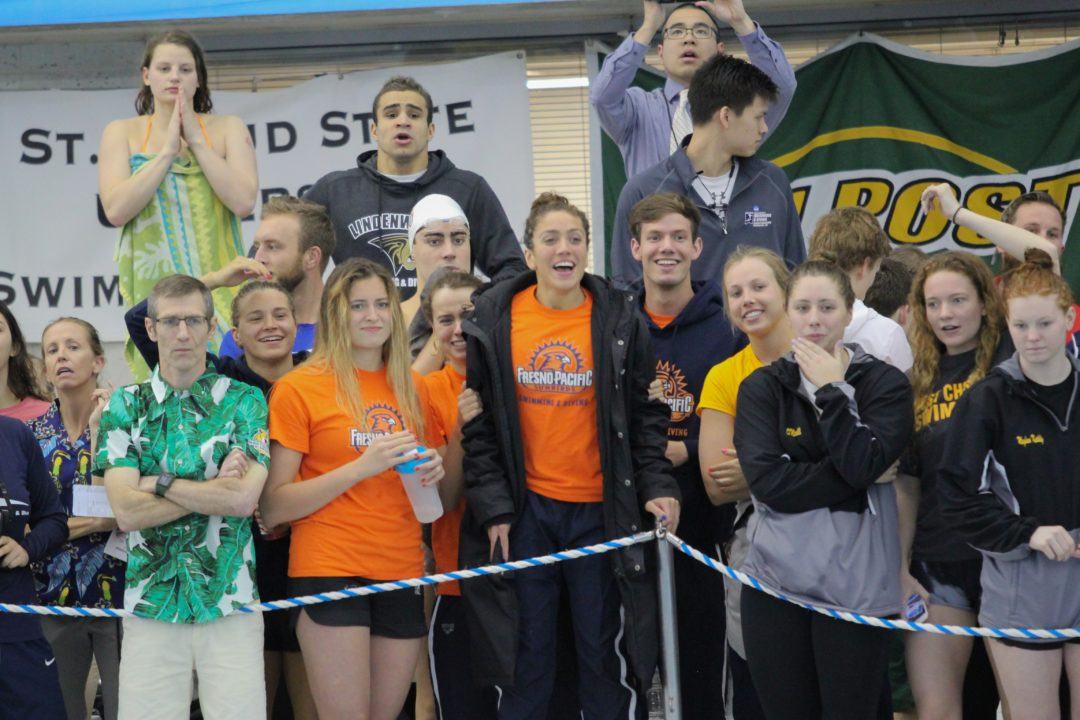 Fresno Pacific University is facing a lawsuit from former competitive swimmers who say they still suffer from after-effects from a 2018 chlorine leak. Archive photo via Fresno Pacific Athletics

NCAA Division II school Fresno Pacific University is facing a lawsuit from former competitive swimmers who say they still suffer from after-effects from a chlorine leak, which took place in January of 2018.

As we reported at the time of the incident last year, 13 swimmers were taken to the hospital with minor inhalation and burn injuries, but the University announced that all affected swimmers had been medically cleared. According to the Fresno Fire Department, the leak occurred when the automatic chlorination system malfunctioned, releasing excess chlorine.

Now over a year later, 3 swimmers say they are still dealing with the aftermath of the incident, including on swimmer describing how he ‘can barely exert himself physically now beyond walking’ and allege that the University tried to minimize the extent of the incident

Dakota Lowe-Garrelts, a former swimmer who quit the team after the chlorine exposure, stated to ABC this week, “It was a very frightening and horrible experience we all had to go through.

“I don’t feel like the medical care was a priority after the incident and I’m optimistic now that I will have a proper assessment done and get my ongoing issues addressed,” he told Action News.

Lowe-Garrelts and fellow swimmers Mireya Ortega and Matheus Misquito are suing the school, alleging that their coach and other school officials pressured them to get back to swimming ‘without ever getting proper medical care.’

The students also say that the university promised to cover their medical bills, but has yet to pay.

Per ABC, “At least one of our clients is now being sent to a collection agency because of their ambulance bills,” said attorney Michael Louis Kelly, who represents the three swimmers.

A spokesperson for the University, Wayne Steffen, says, “Fresno Pacific University does not comment on pending litigation. The university is committed to the health and well-being of every student entrusted to us.”

The two parties’ court date is set for February.

Sounds like 3 athletes’ parents are trying to cash in on something at this point is quite obviously falsified. “Can barely walk” from minor inhalation from over a year ago after being almost immediately cleared afterwards? Please.