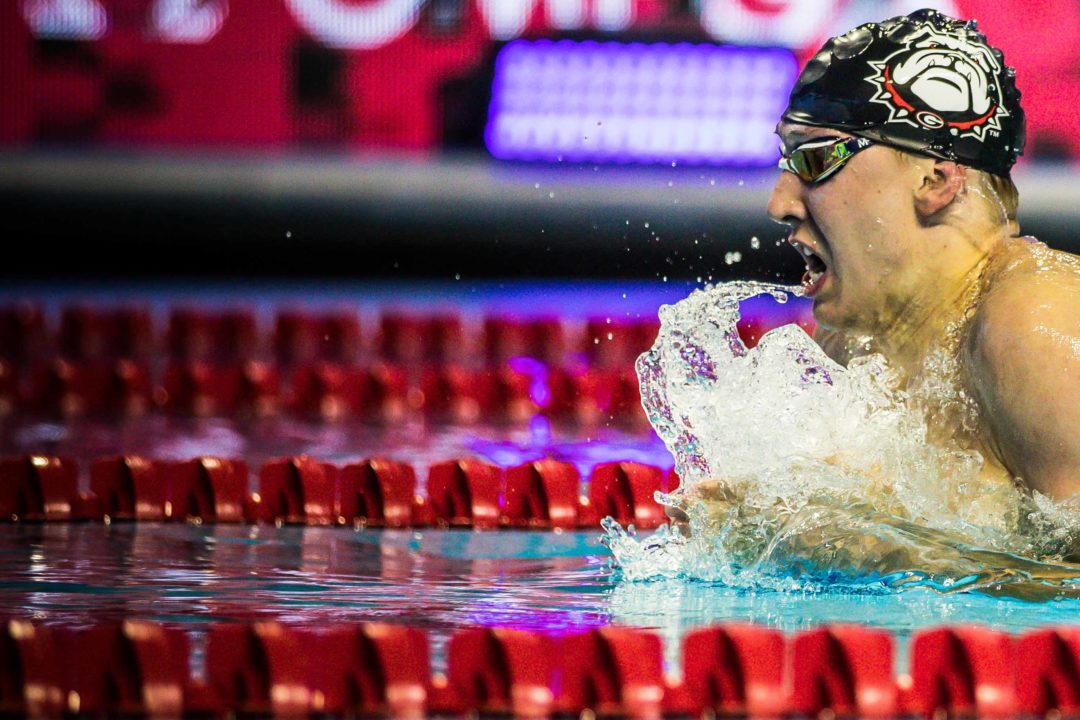 Chase Kalisz (above) and Andi Murez are both out for Lewisville, while the LA Current have added 3 new swimmers to their roster for their opener. Archive photo via Jack Spitser/Spitser Photography

As teams arrive, or prepare to arrive, in Lewisville, Texas for the first Group B meet of the 2019 International Swimming League season, the Los Angeles Current have made some last-minute changes to their lineup.

Of the 27-swimmer lineup announced earlier this week, the Current will lose 2 swimmers for Lewisville, though they’ve added 3 to their roster to bring them to 28 expected to swim this weekend.

American swimmer Chase Kalisz will miss the meets in Lewisville and Budapest, the Current reported to SwimSwam on Wednesday evening. Kalisz is expected to join the team for the American derby event in Maryland in November. The 25-year old Kalisz was the 2017 World Champion and 2018 Pan Pac Champion in both the 200 IM and 400 IM. At the 2019 World Championships, he took one medal: bronze in the 200 IM. He missed the final altogether in the 400 IM.

Kalisz’ versatility is valuable in the ISL format, as he would have been a possible top-half contributor in all 5 races over 200 meters, in addition to the 400 IM. The Current still have Andrew Seliskar with a very similar skill set, and have added Matthew Josa in Kalisz’s place. Josa is versatile like Kalisz, but prefers the shorter distances: he’s a very good 100 backstroker, 100 butterflyer, and 200 IMer. In 2019, his best times were 50.4 in the 100 free mid-season, 52.2 in the 100 fly at the Pan American Games, and 23.8 in the 50 fly mid-season.

The Current’s women’s sprint group takes another hit with Israeli swimmer Andi Murez out of the meet in Lewisville. The Current, who still had room on their 14-swimmer women’s roster before Murez’s withdrawal, have added Linnea Mack and Bailey Andison to their group for Lewisville.

The Current are already going to be without sprinter Amy Bilquist for Lewisville.

Bailey Andison, a first-year pro from Indiana University, is primarily an IM swimmer, with breaststroke being her best single-stroke specialty. Her long course bests in the 200 and 400 IM, both from 2019, are 2:11.33 and 4:45.20, respectively. The women’s IM fields are fairly thin in the ISL, so a peak performance from her could steal some surprise points. Kathleen Baker (200 IM), Leah Smith (400 IM), Ella Eastin (200 IM and 400 IM), and Anastasia Gorbenko (200 IM and 400 IM) are also IM options for the Current.

I feel like if you don’t participate in one of the US vs Europe meets you shouldn’t be allowed to compete in the derby or the final.

FWIW, athletes on teams that advance to the final are paid their “qualifying for finals” bonuses based on the number of matches that they attend. $1000/swimmer/match attended for swimmers in clubs that qualified in final match and attend.

So, there’s some check. It’s not a huge financial incentive for most athletes, but it’s something.

yeah but he missed the 400im final

Can I make a bet and say he retires after next summer?