Federica Pellegrini Is Earning ‘Around 40,000 Euros’ as ISL Ambassador 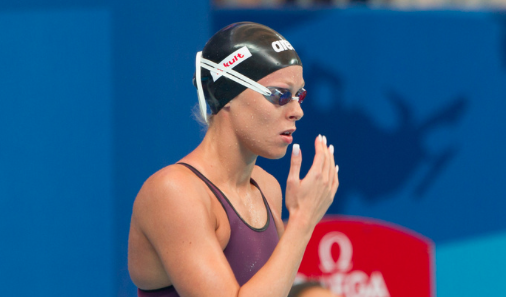 Italian publication SPORT24 has revealed in an interview with International Swimming League backer Konstantin Grigorishin that Italian swimmer Federica Pellegrini is earning around 40,000 ($44,000) Euros as her ambassador fee for the inaugural season of the league. It’s not clear if that fee includes her team salary or is in addition to that total – she is the General Manager of the Aqua Centurions squad based out of Rome.

Financial details about the upstart league have been sparce, though sources have told SwimSwam that the maximum salary for non-ambassador athletes is $25,000 for the first season. Rumors about fees for different ambassadors have ranged up to 6 figures, but before the report on Pellegrini’s fee, exact dollar amounts have not been shared publicly.

Grigorishin also revealed that to date, he has invested $25 million in the first season of the league. At the London summit that began the momentum for the ISL last December, a budget of $12 million for the first season was proposed. According to the Sport24 report, he’s prepared to spend another $140 million over the next 2 years to continue to build the league.

Grigorishin made his wealth primarily by selling metallurgy products from Ukraine to Russia in the late 1980s, according to Forbes, which in 2015 estimated his net worth at $1.1 billion.

Also in the interview, Grigorishin confirmed that television rights are the primary target for the league’s financial stability, calling merchandising and tickets “little more than peanuts.”

“Eurosport has paid for the television rights for Europe with the exception of Russia of 4 editions of the Olympics, from Pyeongchang 2018 to Paris 2024 (2 winter and 2 summer), 1.46 billion Euros,” Grigorishin said. “We can therefore establish that the cost of an hour of Olympic Games, including the opening and closing ceremonies, is around 1.66 million Euros. The importance of swimming in the Olympic context is undisputed: in Tokyo 2020 the finals are scheduled for the morning to guarantee the prime time to the NBC, the historic American broadcaster of the Games.”

The league will have 30 hours of live television in its inaugural season, with a goal of reaching 100 hours in the 2nd season in 2021. The league was initially announced with 12 teams, but was eventually scaled back to just 8 for the opening season (though the league remains committed to expanding to 12 teams, including one in Germany, in 2021).

Strange arithmetic. $25 million were already spent. Where? Swimmers contracts won’t exceed $4 millions (~ 6 teams x 30 members x $20,000). If television contracts is the main source for income and they got only 30 hours and the cost of ISL hour is definitely incomparable with the cost of Olympic hour then Grigorishin won’t cover this $25 millions he already spent. Is he an altruist, the blessings to the sport of swimming. Hard to believe. BTW at the late 1980s there weren’t Ukraine and Russia but there was the Union of Soviet republics and any transactions especially financial were under strict control of Communist party leaders. Whatever was sold that time was actually stolen when state properties miraculously became… Read more »

Money will go places we will never see

There must be some pretty deep administrative and operational layers and expense accounts to pull this off. Infrastructure, venues, media, etc. Many companies have to be hired for various functions. Athlete salaries are just the tip of the iceberg.

From what I understand, your $4 million estimate is even a gross overestimation. Most of the salaries that we’ve heard are in the $3,000-$6,000 range.

In the light of your information I am wondering if Minakov’s decision was a result of failing attempt to renegotiate the contract with ISL after his success at World Championships.

I like the idea of professional swimming. I just don’t understand how the math adds up. So the ISL investors put in 25 million. How do they profit? For this to be a viable long term league, the investors have to make money. Did they explain somewhere how this works and I missed it?

My guess is they’re planning to operate at a deficit for the first few years, which isn’t uncommon when building a business. The theory is most likely that creating an infrastructure for the league to flourish will cost money, and that once it’s up and running there will be a rise in popularity of the sport.