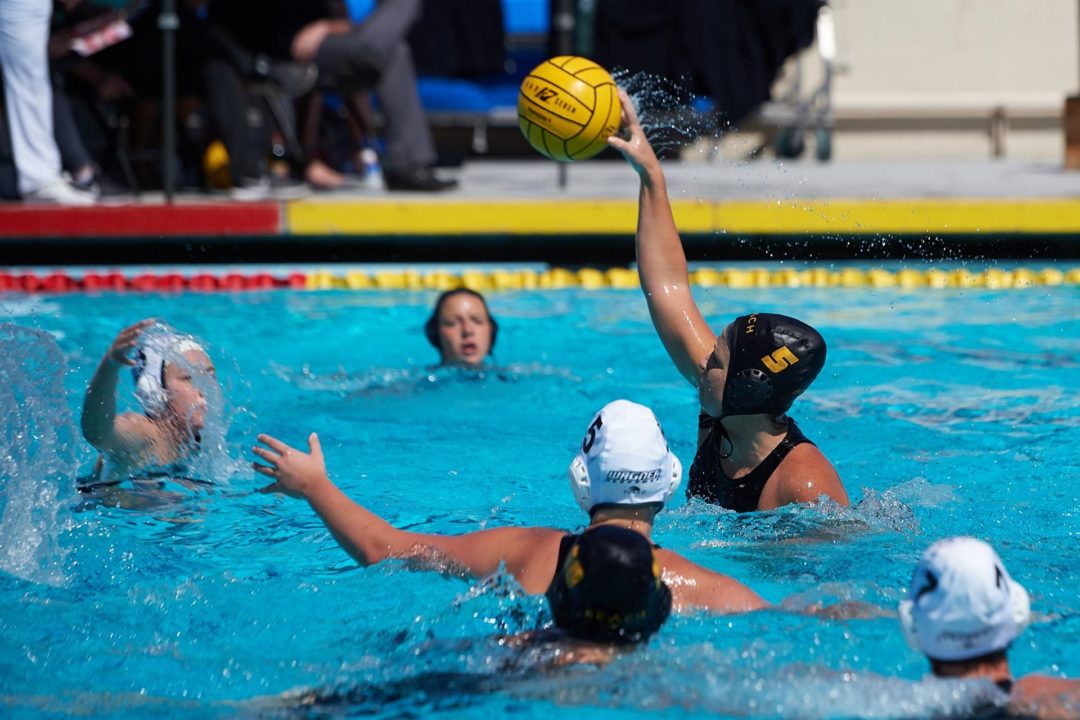 #15 Long Beach State’s Sarah Barker recorded five goals in a 13-7 win over #16 Wagner on Sunday and added four more in a 15-6 victory over RV Bucknell on Thursday. Barker was one of 24 players with at least one four-goal effort on Week 8. Current photo via Long Beach State Athletics

St. Francis Brooklyn’s Kelsey Snelgar put in eight goals in the Terriers’ 24-3 win over Connecticut College and followed that up with a six-goal effort in a 32-3 win over Utica College on Sunday to lead all scoring efforts on Water Polo Week 8.

Maud Megens dropped in five goals as #1 USC picked up a 12-8 road win at #5 Hawaii. Irene Gonzalez countered with a hat trick for the Rainbow Wahine.

#15 Long Beach State’s Sarah Barker recorded five goals in a 13-7 win over #16 Wagner on Sunday and added four more in a 15-6 victory over RV Bucknell on Thursday. Orsi Hertzka notched a hat trick against Wagner, while Marilia Eleni Mimidi scored four times for the 49ers against Bucknell. Olivia Grim led the way for the 49ers with a hat trick in its 10-8 win over #18 Cal State Northridge on Saturday.

Cal State Northridge’s Tori Wilson netted eight goals on the Tuesday in wins over Connecticut College (13-2) and Austin College (20-3). Wilson put in three goals in the first game and added five more in the night cap. Yuri Cowie added a hat trick in the latter contest. Later in the week, Madasonne Butler came up with a hat trick in a 10-8 loss to #15 Long Beach State.

Morgan Malloy notched five goals and Hana Vilanova added four, with each scoring in overtime, as #12 Loyola Marymount crept past #13 Wagner 15-13 on Friday. Later in the day, Vilanova and Marialena Seletopoulou each added a hat trick as the Lions topped RV Bucknell 10-8.

On Saturday, Malloy chipped in a hat trick in both of LMU’s victories, a 10-6 win over #20 Marist and a 10-7 win over #14 Princeton. Seletopoulou also put in three goals in the win over the Tigers to cap a 4-0 weekend at home.

Erica Hardy put in four goals for #16 Wagner and Sofia Diaz Alvarez added a hat trick in a 15-13 overtime loss to #12 Loyola Marymount on Friday. Kristy Donkin and Daisy Nankervis score three goals apiece as the team edged past #20 Marist 11-10.

Diaz Alvarez added four more goals alongside Jacqui Sjogren in the Seahawks’ 14-4 win over Cal State East Bay on Saturday as Hardy scored a hat trick. Nankervis, Malia Josephson and Diaz Alvarez scored three goals each in Wagner’s 14-12 win over #19 San Jose State to wrap the team’s efforts at the LMU Invite. Josephson finished the weekend with another hat trick in a 13-7 loss to #13 Long Beach State on Sunday.

#6 Michigan’s Maddy Steere notched four goals and Julia Seller and Abby Andrews chimed in with three apiece in a 17-7 win at #13 Fresno State. Steere added three goals in the team’s 8-7 win at #7 Pacific, while Andrew added three more 11-7 loss to #4 Cal on Sunday.

#13 Fresno State’s Emily Nicholson was 4-for-4 in the team’s 18-8 win over George Washington on Wednesday, while Callie Woodruff and Trystyn Vuori turned in hat tricks.

#14 Princeton saw Eliza Britt net four goals and Kailie McGeoy add three in an 11-9 loss to #19 San Jose State on Friday. The Tigers got hat tricks from Lauren Larkin and Amy Castellano in their 13-9 win vs. Pomona-Pitzer on Saturday.

Gannon’s Kelly Fehr had four goals on five shots in an 11-9 loss to Saint Francis (PA) on Saturday.

LaVerne’s Jassmine Kezman and Ilene Guerrero put in four goals each against Cal Lutheran on Tuesday, but it was not enough in the 13-12 loss. Nikki Roed and Mardell Ramirez scored three goals apiece for the Regals in the victory.

Christin Hirn and Mackenzie Thomas paced Cal Lutheran with four and three goals respectively as the team bested Chapman 16-5 on Saturday. Argelia Diaz turned in three goals for Chapman in the loss. Diaz also added a hat trick alongside Alyssa Caltagirone in the Panthers’ 17-9 win on Thursday.

Pomona-Pitzer got four goals from Nadia Paquin in a 12-7 victory over Cal Lutheran on Thursday.

Bente Rogge notched a hat trick on Thursday as #8 Arizona State bested #22 Indiana 10-5. She added another three-goal effort on Saturday as the Sun Devils fell to #3 UCLA 12-9.

Brigit Mulder put in three goals amongst seven scorers for #4 Cal as the Bears registered an 11-7 win over #6 Michigan on Saturday. Mulder notched two of the final three goals in the match as Cal rallied from down 7-6 to grab the win.

Claremont-Mudd-Scripps got three goals from Aracelia Aldrete in its 7-6 road win over Redlands on Tuesday in SCIAC play.

Sawyer Bellville put in three goals to lead all scorers for Whittier in a 7-6 win over Claremont-Mudd-Scripps on Thursday. Bellville also posted a hat trick alongside Emma Romero in a 19-3 win over Cal Tech on Tuesday. The Poets got three goals from Teresa Marchetti in a 13-4 win over Occidental on Saturday morning.

Monica Chernoff scored three of Occidental’s five goals in a 5-4 win over Austin College on Wednesday.

Player of the Week: Sarah Barker, Long Beach State – Totaled 10 goals in wins over RV Bucknell (15-6), #21 Cal State Northridge (10-8) and #16 Wagner (13-7); posted four goals against Bucknell and added five against Wagner; put in one goal in the Big West road win over the Matadors

Player of the Week: Maddy Steere, Michigan – Posted eight goals, four assists, two field blocks and a steal as the Wolverines went 2-1 in California last week; notched four goals and two assists in a 17-7 win at #13 Fresno State; added three goals, one assist and two field blocks in 8-7 win at #7 Pacific; accounted for one goal, one assist and one steal in 11-7 loss to #4 Cal.

Defensive Player of the Week: Heidi Ritner, Michigan – Registered 27 saves and two steals as Michigan went 2-1 in California; grabbed 11 saves in an 8-7 win over #7 Pacific; made nine saves in 25:59 against #13 Fresno State; stopped seven shots in 11-7 loss to #4 Cal

Rookie of the Week: Laura Larkin, Princeton – Registered 10 points at the LMU Invite; scored two goals and had two assists against #19 San Jose State; notched a hat trick vs. Pomona-Pitzer and added a score against #12 Loyola Marymount; earned second straight CWPA Rookie of the Week nod

Player of the Week: Marialena Seletopoulou, Loyola Marymount – Scored at least two goals per game as the Lions went 4-0 at the their home LMU Invite; totaled five goals on each day of the tournament; recorded a .556 shooting percentage.

Offensive Player of the Week: Kelsey Snelgar, St. Francis Brooklyn – Turned in 21 points (14 goals and seven assists) in wins over Connecticut College (24-3) and Utica (32-3); notched eight goals and three assists in the first match and added six scores and four assists in the second.

Player of the Week: Maud Megens, USC – Scored five goals and added two steals and an assist in the Trojans’ 12-8 road win over #5 Hawaii; her five goals came in a 7-0 surge, which put the Trojans up 10-2 in the third period

Newcomer of the Week: Alejandra Aznar, USC – scored twice and earned a 5-meter penalty shot in the road win over #5 Hawaii; her first goal put USC up 5-2 and her second made it 12-5; the 5-meter penalty shot she earned helped USC to its fourth goal in a 7-0 mid-game surge.

Defensive Athlete of the Week: Shelby Garcia, LaVerne – Made 19 saves as the Leopards split with Claremont-Mudd-Scripps (Won 7-6 OT) and Cal Lutheran (L 13-12); recorded two penalty shot saves and a one-one-one save amongst 11 saves against CMS; added eight saves and a steal against Cal Lutheran

Player of the Week: Kelly Fehr, Gannon – Scored seven goals and drew five exclusions in matches against Mercyhurst and Saint Francis (PA); put in two goals and added an assist and a steal in a 7-5 win over Mercyhurst; had four goals on five shots and registered two blocks in an 11-9 loss to the Red Flash.