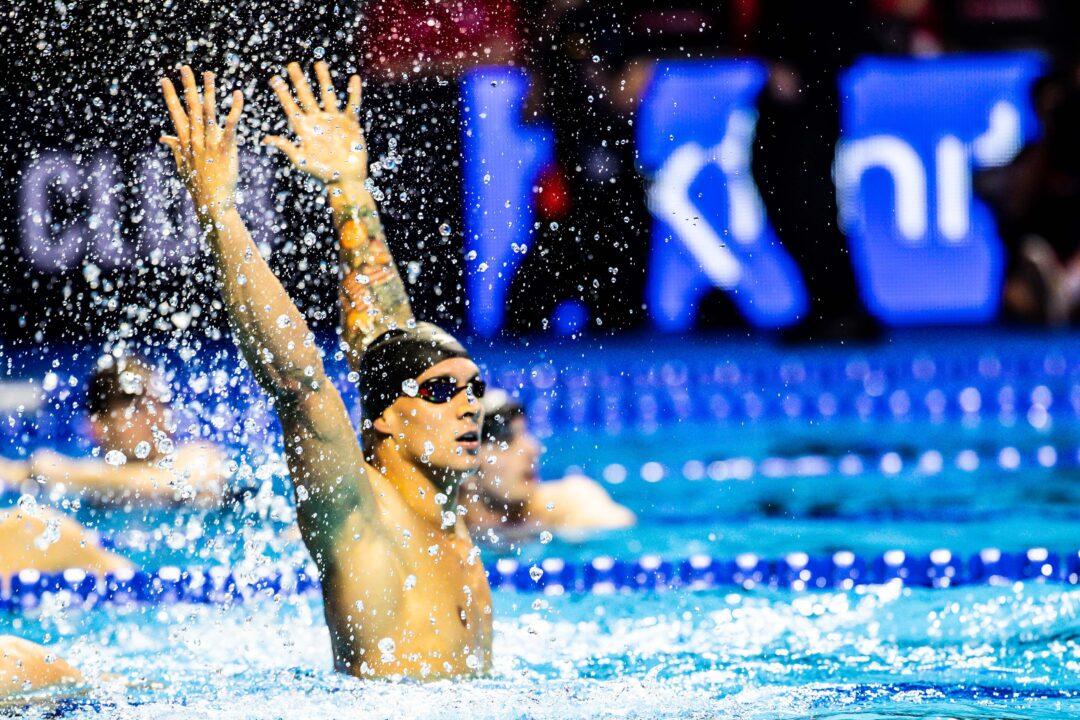 Caeleb Dressel and Michael Andrew are still the favorites to go 1-2 in the 50 freestyle, though there are plenty of fast up-and-comers in the mix. Current photo via Jack Spitser/Spitser Photography

Caeleb Dressel owns the 50 freestyle. Absolutely owns it. He is the fastest man all-time in the short course yards and short course meters version of the race, and is the 3rd-fastest all-time in the long course version of the race. Dressel is the 2017 and 2019 long course world champion and the 2021 Olympic gold medalist. Dressel’s margin of victory in the 50 free in Tokyo was daunting: 0.48 over silver medalist Flo Manaudou (21.07 to 21.55, respectively). That tops his combined margins of victory in the 100 butterfly (0.23, 2nd Kristof Milak) and 100 freestyle (0.06, 2nd Kyle Chalmers).

At the 2021 U.S. Olympic Team Trials, Dressel won the 50 freestyle, tying his American Record of 21.04 first established at the 2019 FINA World Championships. Dressel’s margin of victory in Omaha was 0.44, topping runner-up Michael Andrew.

Now that we’ve talked about Dressel we can move on to everyone else. There is a pretty clear favorite for 2nd, but following an incredibly fast NCAA season, we ought to see some new blood vying for a spot in swimming’s fastest race at the 2022 World Championships.

Michael Andrew placed 2nd to Dressel in the 50 free at the 2021 U.S. Olympic Team Trials, and later placed 4th in the race in Tokyo. Andrew had a huge year in 2021, and has been strong in his return to racing in 2022. Andrew posted a 21.48 in Omaha last summer, punching his ticket to Tokyo (for the 3rd time) and just missing his lifetime best of 21.46, set at the 2018 Pan Pacific Championships, where he won gold, besting Dressel.

Andrew has said he is going to give priority to the 50 freestyle over the 200 IM in 2022, essentially, focusing on races 100 meters and shorter, such as he did in 2018. Andrew is an easy favorite for the second spot in the 50 free. Will he get his hand on the wall before Dressel? It’s happened before, though we’ll keep Dressel as the gold medal favorite.

NCAA superstars Brooks Curry and David Curtiss ought to make some noise in Greensboro. While both Curry and Andrew are Olympic gold medalists, Curry has a much broader freestyle range than Andrew. Curtiss, meanwhile, is raw speed, and has already shown promise in long course in 2022, despite having tapered and focused on the NCAA Championships in late March. Either could upset Andrew, though it seems like a stretch. Curtiss placed 6th in the 50 freestyle at the Olympic Trials last summer, while Curry tied for 9th. But look for Curry in the 100 freestyle, the event that got him onto his first Olympic team in 2021 with a 4th-place finish in Omaha.

2020 Olympian Hunter Armstrong won the B1G Championship in the 50 and 100 freestyles, though did not swim at quite the same level at NCAAs. Still, Armstrong has already been to the biggest event in sports, the Olympics, and has hardware to show for it. A sprint backstroke and freestyle specialist from the Big Ten, Armstrong is Generation Z’s version of Matt Grevers: we expect him to be in the mix through the semifinals, but it’s difficult to say beyond that point.

Justin Ress has been pro since 2018 and has represented the United States internationally at the 2017 World Championships, where he swam the 50 backstroke, as well as the 2017 and 2019 World University Games, and the 2018 Pan Pacific Championships. Ress has also been one of the best sprint freestylers in the ISL the past 3 seasons and a huge asset to the Cali Condors, which is saying a lot since that’s the same team Dressel swims for. In 2021, Ress placed 7th in the 50 at U.S. Trials.

2020 Tokyo Olympian Drew Kibler had a huge NCAA season, winning his first individual title in the 200 freestyle, as well as 6th in the 50 and 6th in the 100 free. Kibler earned his spot on the 2020 Olympic team in the 200 freestyle, and didn’t actually swim the 50 last summer in Omaha. Even so, Kibler is perhaps the most versatile American freestyler competing today, with short course yards best times of 18.60 in the 50 free and 4:08.26 in the 500.

Other Olympians in the Mix

Nathan Adrian and Anthony Ervin are both individual Olympic gold medalists and have contributed to Team USA’s storied history in the sprint freestyles, but both have been quiet lately. Adrian placed 3rd in the 50 freestyle in Omaha in 2021, just missing out on an Olympic berth. Ervin, meanwhile, placed 23rd at the 2021 U.S. Olympic Trials.

Speaking of Olympic gold medalists, Bowe Becker placed 4th in the 50 free last summer at Trials. Becker doesn’t really swim anything other than the 50 and 100 freestyle at major meets, so his schedule and narrower focus on these events could work in his favor, especially when compared to Andrew, who is expected to take on 5 events in Greensboro.

2016 Olympic gold medalist Ryan Held and 2020 Olympic gold medalist Zach Apple are two more that have the experience–and the speed–to be in the final in Greensboro. Both men are better at the 100 freestyle, with Apple’s range extending up to the 200 in both short and long course. Held, on the other hand, has more raw speed. However, neither man advanced beyond the semifinals of the 50 last summer in Omaha.

Dark Horse: Will Davis was a force to be reckoned with during the 2021-2022 NCAA season. Davis represents raw power and is a 50 freestyle specialist. Davis placed 11th in the 50 free at NCAAs, though among American competitors, he ranked 6th. Davis contributed huge splits on Florida’s 200 freestyle and 200 medley relays, blasting an 18.28 on the free relay and an 18.38 on the medley relay. Davis tied with Curry for 9th in the 50 freestyle at U.S. Olympic Trials in 2021.

Weird to put Held at the bottom of the preview when he went 21.6 last summer and has looked pretty good. IMO he’s about even with MA for that 2nd spot, maybe Curtiss as a dark horse, anyone else is a real longshot to make top 2.

How about a little cheese to go with that w(h)ine? Waaaaaaaaaa.

Unrelated but Schoenmaker ans Peaty are both confirmed to be prioritising Commonwealths (And peaty Europeans). Peaty saying as there is a worlds next year he will be peaking/ maximising for Commonwealths and Europeans instead.

USA seem to now be the only big country that are souly focusing on worlds, their medal tally with a fully peaked and tapered team compared to everyone else missing/ focusing elsewhere could be rediculous.

Where was it confirmed that Peay is prioritising Comm Games?

He said it on his most recent YouTube video

US has no other choice really

I really think this is Dressel and Andrew to lose. Andrew will be closer to Dressel than the third swimmer to Andrew. Correct me if I am mistaken but Michael Andrew hasnt lost a 50 free to any other american than Caeleb in a big meet for the last 4 years, he is pretty consistent in the 21,5-21,6 range. With this years focus in shorter events I cant see him losing his spot

To put it simply this is Dressel’s baby and this is the only event where I have no doubt he takes it as a whole. The second spot might be a toss up between 4 guys. Andrew, Held, Curtis and Curry (this one is sort of an unknown only because his current best time is 22.08 but his 18.5 could mean a lot though). For now I’ll say:

Ngl if there’s a pick’em for trials I might lose my mind over it even more than I did for NCs. Especially in this event. Also screw it not could be wrong 2-8 WILL be wrong as in Will Smith slapping me once the 50 is over wrong.

I like the pick of Chaney in the top 8.

There’s no way this event will be so fast at the moved up April trials in a post-Olympic year.

Correct. It’s like what, three clicks to load from OME into MM?

A full business day has passed – in my time zone anyway – and no psych. Silly.

dressel is third all time for long course******

Awaiting that Remel stan to drop an image with Cielo and Bousquet crossed out because they were rubberized, unlike 17.63 no fins

Cielo and Bousquet have also found themselves in hot water with anti-doping authorities.