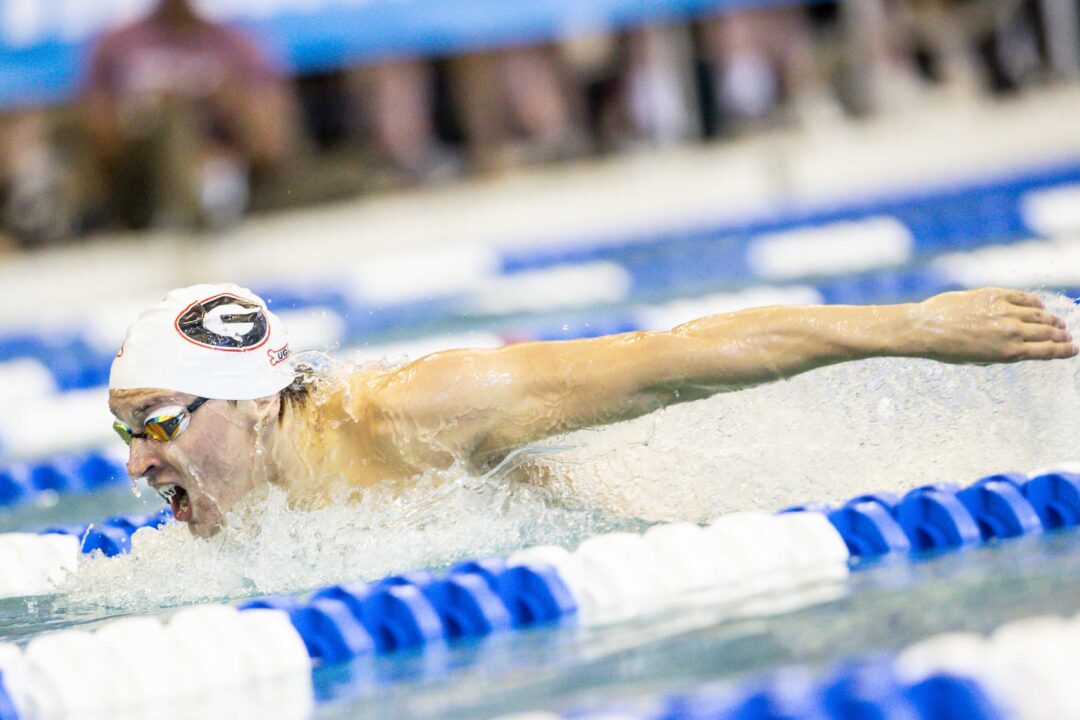 The 200 fly is is a wide open event where there's a mix of experience and those looking to make their first international team. Archive photo via Jack Spitser/Spitser Photography

Since Phelps’ retirement in 2016, a revolving door of athletes have represented the U.S in the men’s 200 fly. In many ways, the U.S is looking for redemption in the event–no Americans medaled at the Tokyo Olympics or at the last two World Championships.

The American finalist in Tokyo, Gunnar Bentz, retired. Zach Harting represented the U.S in the event at 2019 Worlds and the Olympics but even with his international experience, the event still feels wide open.

Another factor that makes this event tricky to predict is that only two of the main contenders have registered a long-course 200 fly swim this season.

Zach Harting and Chase Kalisz are the two who’ve swum a long-course 200 fly this season. Harting, who recently got engaged, was 1:58.81 at the Westmont Pro Series. That’s well off his lifetime best 1:54.92 from the Olympics, and with this field, he’ll need to be much faster if he wants to qualify for his second Worlds team.

Prior to the San Antonio Pro Series, sources told SwimSwam that Kalisz was shifting his focus away from the 400 IM to shorter events, including the 200 fly. At Olympic Trials, Kalisz qualified sixth for semifinals in 1:56.74 but scratched out. He was right on that time in San Antonio, swimming a 1:56.79. If he is focusing on the 200 fly and he hits his taper, there is certainly a path for him to make the team in this event–especially if he can get close to his lifetime best 1:54.71 from 2014.

Jay Litherland, Kalisz’s UGA pro group teammate, is another swimmer to keep an eye on. At Olympic Trials, he swam a lifetime best 1:57.65 for tenth in semifinals. Litherland’s first official long course meet this season was San Antonio where he wasn’t close to his best times, but if he’s on form, he’s certainly capable of making the final. Though if he wants to make the Worlds team, he’ll need to cut about a second off his best.

Luca Urlando is coming off a monster NCAA meet. Among the highlights, he broke Ryan Murphy’s American Record in the 100 back and became the first man to be sub-44 in both the 100 back and 100 fly. After only having six weeks of full training before SECs, it will be interesting to see how he manages the quick turnaround and the shift from short course to long course. In addition, he will be looking to strike back after placing third at Olympic Trials by .09 when his lifetime best 1:53.84 would’ve won by over a second.

Trenton Julian and Nicolas Albiero both finaled at Olympic Trials and NCAAs. Julian swam a 1:50.01 at short course worlds in December, where he used his usual race strategy of going out hard and trying to hold on for the last 50. Keep an eye on whether he employs these same tactics next week.

Albiero swam a lifetime best 1:55.85 to finish fourth at Olympic Trials. Like the other NCAA swimmers, he has a quick double taper to manage, but he should be in the mix as he looks to make his first international team.

It’s also worth circling Gabriel Jett on the heat sheet. At the 2021 Mission Viejo Pro Series, he swam a lifetime best 1:57.82. He added five seconds at Trials, but now that he has a year at Cal in the books, he could be due for a drop.

WHERE ARE THEY NOW?

Another Olympic Trials finalist, Brooks Fail, did not swim the event at NCAAs where he usually does a grueling 200 fly/1650 double. Not swimming the 200 fly could signal that he’s shifted his focus to solely the distance events. But if he opts for the 200 fly, he could be a factor in the final as well.

Corey Gambardella and Zach Brown, who swim for Indiana and NC State respectively, are the last two of the six college swimmers that featured in the Olympic Trials final. Both were fairly quiet during the college season. Gambardella finished 20th at NCAAs and Brown did not swim at the meet. Neither did Stanford freshman Matthew Fenlon. Northwestern fifth-year Connor Lamastra finished 22nd in the event. His long-course best is a 1:57.49.

Junior Cole Crane didn’t make Texas’s NCAA roster, but he’s much better in long-course than he is in yards. At Olympic Trials, he swam a lifetime best 1:58.33 to make the semis. He didn’t drop time in this event during the college season, which might imply a bit of a plateau. However, since he didn’t swim at NCAAs, he’ll have had more time to focus on this meet than some of his peers in the field.

Dark Horse: Aiden Hayes (NC State) – SwimSwam’s #1 ranked recruit had a solid freshman season at NC State. In the postseason, he broke both the 100 and 200 fly 17-18 NAG records. His long-course best time sits at 1:58.06 from last year, but based on his short-course season, he could be primed for a big drop.

Connor Lamastra will shock the world.

Dahlgren could be in the mix, his best time stands at 1:57.5 from 2019. He doesn’t swim the event short course, but he’s coming off a great collegiate season! He should be due for a big drop

This is really sad… I thought when Phelps retired…. We would still be dominant in numerous events. Now we barely even win relays.

ur landon is coming 1st

Luca Urlando has shown that he was back at NCAAs after 2 tough years. But his best performances were in the 100s. On paper he’s the best of the field. But has he specialized more into the shorter distances now? We’ll have the answer soon.

Whoever swims 1,54 will go to worlds.

I see a big drop from Gabriel Jett here. Don’t think he’ll challenge for a spot on the team but I wouldn’t be surprised to see a 1:56 low

Maybe…kind of depends where he’s at with his training, etc. He had a very good NCAA meet overall, but missed a bit on the 200/500 Free from his mid-season bests. I think his yards time in the 200 Fly should translate well – and he seems to be a swimmer who could do very well in LCM pools.

3 years ago, Luca was USA number 1 200 flyer in HS. Hopefully 3 years later, he is faster! I think second spot is up in the air.
If Chase does get the second spot, I think he would not be able to swim both the 2im and 2fly because at worlds, the semis of 200 fly are right before finals of 200IM (or vice versa). Nothing in between! It is the same problem Marchand would have!