2022 M. NCAA Previews: Is Anyone Beating Bobby Finke In The Mile? 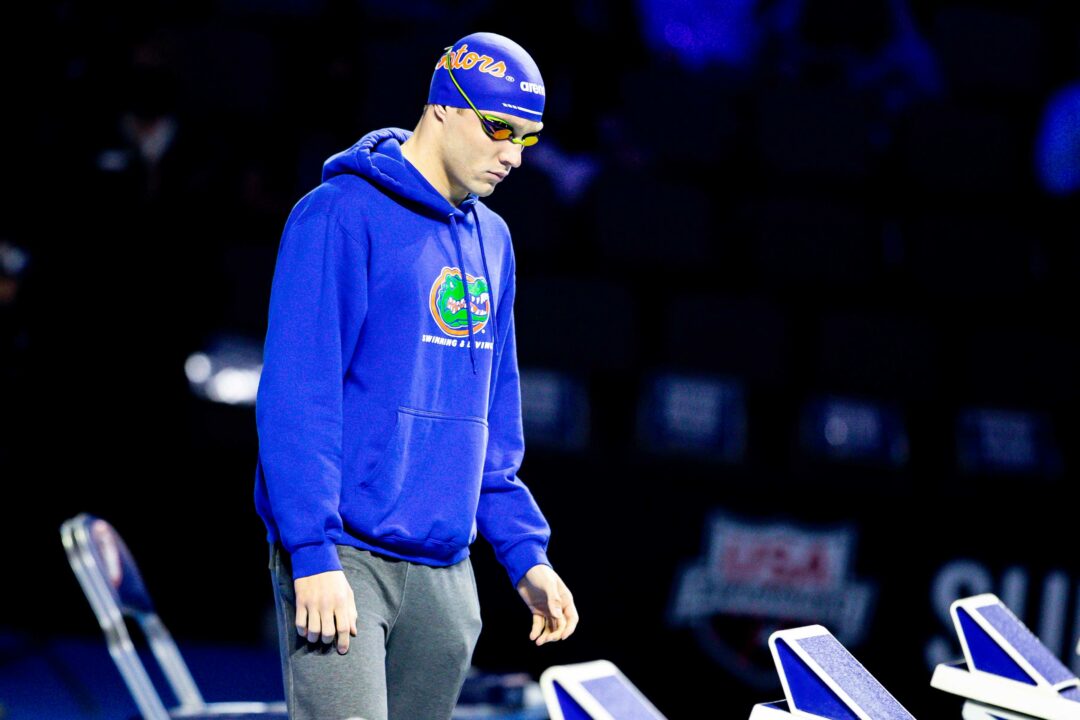 Finke is the Olympic champion, American record holder, and defending NCAA champion in the mile, making him the heavy favorite win to this year. Archive photo via Jack Spitser/Spitser Photography

Florida’s Bobby Finke is the fastest man in the history of the 1650 free, holding the NCAA, US Open, and American record in the event at 14:12.08. He is also defending NCAA champion in the event and is now a double Olympic gold medalist in the long course 800 and 1500 meter freestyle. Also, he holds the top time in the nation this year at 14:27.70 by nearly five seconds despite not swimming at conferences due to COVID-19 protocol.

In other words, although Finke is known for blowing past the field in the final 50 meters of long-distance races, he might not even need it this time around because there is no way that anybody is coming close to him in the mile at NCAAs.

In fact, Finke told SwimSwam prior to conferences that one of his goals was to be the first man under the 14-minute barrier in this event. Although dropping 12 seconds in an event is a stretch, his dominance in the mile would be close to that of his new training partner, Katie Ledecky, if he were to hypothetically complete this feat.

Although Finke is the obvious favorite in this event, the overall field is very strong as well.

One of the swimmers who have seriously challenged Finke is Ohio State’s Charlie Clark. Finke and Clark have never faced each other in short course yards, but they were neck-to-neck in the 400, 800, and 1500 long course free at the US Open meet as December, and Clark was even leading Finke in all three races before Finke blew past him in the final lap. Clark is currently seeded sixth with a personal best time of 14:36.02, which he swam last month to win the mile at big tens. Although Finke’s short course time in the mile is over 20 seconds faster than Clark’s, there is still a possibility that we will get a repeat of the US Open showdown if Clark had a massive drop in time.

Texas’s David Johnston comes in as the second seed with a time of 14:32.40 that he swam just days before entries were due, at the American Short Course Championships. By comparison, at Big 12s, he went 14:45.84 to capture the conference title. Johnston’s swim was a massive personal best for him, dropping 7.73 seconds from his 14:40.13 best time from when he was seventh at NCAAs last year. His teammate, freshman Luke Hobson, who took down Michael Phelps’s 500 free 17-18 national age group record last December, is seeded seventh with a time of 14:40.15 from Big 12s. It is very unlikely that the Longhorns were fully rested for conferences, so there is a great chance that both Johnston and Hobson could be significantly faster at NCAAs.

Florida’s Trey Freeman is seeded sixth with a time of 14:39.74. This year, he “Finked” his competition, beating out his opponents by splitting 23.9 on his final 50 to snag the 2022 SEC Championship in this event in the absence of Finke. Before this season, Freeman had not swam the mile since 2019, when he finished second to Finke at SECs with a time of 14:48.69, but then added time at NCAAs to finish 34th with a 15:06.72. Despite his relative lack of mile swimming in the last two years, it should be pretty reasonable to assume that anyone in Anthony Nesty’s men’s distance group would be able to pull through in the event at any given time.

Another SEC swimmer, Georgia’s Jake Magahey, was trapped in a swarm of Florida swimmers that took seven out of top nine places in the mile at SECs. He was one of the only non-Gators to take a top spot, finishing second to Freeman with a time of 14:40.20 that has him seeded eighth on the psych sheets. Magahey finished second in the mile last year in a time of 14:28.69, and holds a best time of 14:24.96. He is also the defending NCAA champion in the 500 free and the runner-up in the 200 free. However, Magahey has not been near his best times this season, considering that he did not finish top 2 in any of his events at SECs this year.

NC State teammates Will Gallant and Ross Dant conclude the top 8 that will be swimming in the fastest heat at the finals session of NCAAs. Dant is seeded fifth with a time of 14:38.71 from when he placed second at ACCs this year, although he holds a best time of 14:31.17 from when he finished third at NCAAs last year. The only man to beat him at conferences was Will Gallant, who is seeded third with a time of 14:33.40. Gallant is a transfer from Indiana, and in his first year with the Wolfpack, he dropped a whole 15.6 seconds from his previous personal best of 14:49.00.

Perhaps the two biggest names that will be swimming in the early heats of the mile are Indiana’s Michael Brinegar and Arizona’s Brooks Fail.

Brinegar has not been as strong in yards recently, considering that he went from being second at 2019 NCAAs to tenth at 2021 NCAAs, and finished fourth at Big Tens this year well off his best time. However, he did make the Olympic team in the long course 800 and 1500 freestyle, which signifies that he still has room to go back to his old form. He is currently sitting as the ninth seed with a 14:40.23, but his best time is a 14:27.23 from 2019. Brinegar also told SwimSwam a few weeks ago that he believed that it would take faster than 14:10 to win the mile, and that he was ambitious to challenge Finke for the title last year.

Fail was the Pac-12 champion in the mile, and is seeded 13th with a time of 14:41.22. He was the fourth-place finisher at NCAAs last year, when he swam his best time of 14:31.38. Fail has been faster in this event every year from conferences to NCAAs, so it’s very likely that he will be able to do so once again.

Dark Horse: Sean Grieshop, 5th Year, Cal- Grieshop is seeded 33rd with a time of 15:00.90, and finished fifth at Pac-12s. In fact, he is only able to swim the event because he was under the cut line in the 500 free. However, he has a best time of 14:35.82 from when he finished 4th at 2019 NCAAs. In the last race of his college career, Grieshop could turn heads if he potentially returns to where he was at two years ago.

Between a post-Olympic break, shoulder problems in the fall (SwimSwam wrote about it) and then the COVID… I have a feeling Bobby is going to disappoint some people this week. He had a pretty good cushion on the field but I won’t be surprised if someone makes it a race. I like Magahey and the two Texas kids to give it a shot. Finke is an amazing swimmer and I’m sure he’ll kick ass this summer and beyond, but this feels like a meet where he might be vulnerable.

Of all the interesting questions you could ask about men’s NCAA’s coming up this week, this isn’t one of them.

Would 13:59 be the greatest individual feat in mens NCAA swimming history?

Yigit Aslan has been waiting for his moment to take down Finke all year! WATCH OUT!

Yiğit Aslan will/may be in the top 8 as well, Jake Mitchell too, this is a never ending list

Well it ends at 8