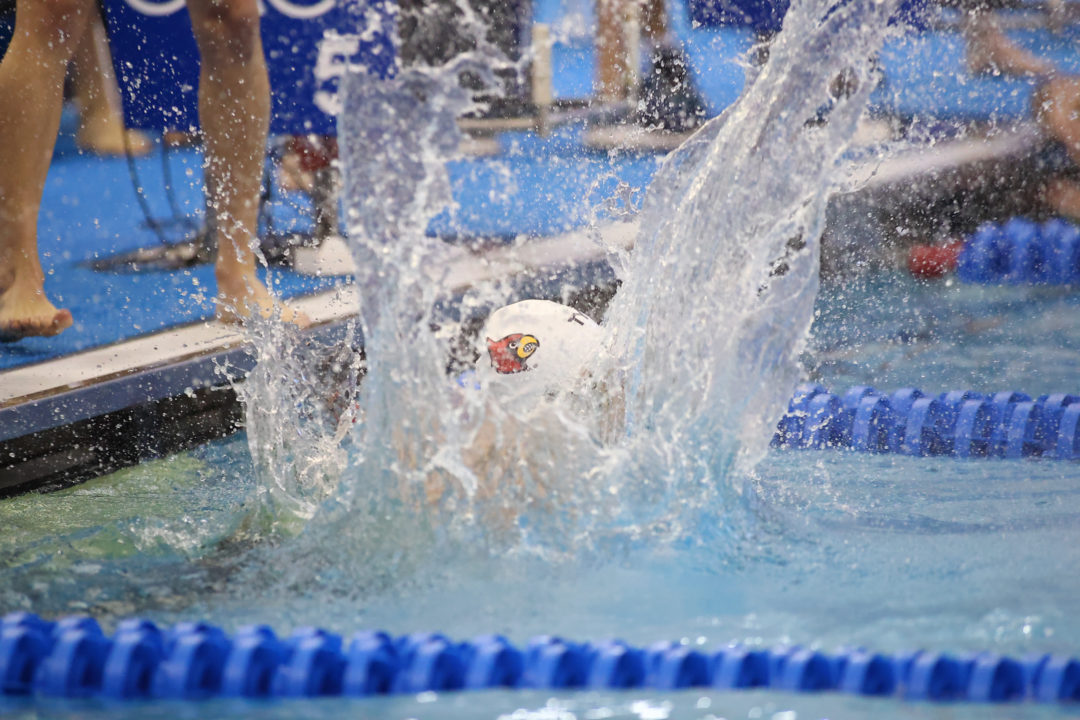 Louisville made program history last year, winning their first ever NCAA relay title by taking this race with a 1:22.11. Stock photo via Jaylynn Nash, the ACC)

Louisville pulled out the win in the 200 medley relay last year, putting together a 1:22.11 to win the program’s first NCAA relay title ever. Here are the results from last year’s NCAAs:

Louisville made program history last year, winning their first ever NCAA relay title by taking this race with a 1:22.11. That relay consisted of Mitchell Whyte, Evgenii Somov, Nicolas Albiero, and Abdelrahman Elaraby. This year, at least at ACCs, Whyte, Somov, and Elaraby were on the relay, while sophomore Dalton Lowe took over fly duties. The Cardinals won the ACC title last month, clocking a 1:21.84, which is the fastest time in the NCAA this season and a considerable 0.27 seconds faster than they swam to win the NCAA title last year.

Although Nicolas Albiero is one of the premier 200 flyers in the NCAA, Dalton Lowe is an upgrade on the fly leg of the 200 medley. Last year, Albiero swam a 20.07 on the fly leg of Louisville’s title-winning relay, while Lowe just swam a 19.50 at ACCs just a month ago.

Somov split an electric 22.87 on the relay last year, then doubled down, splitting 22.85 at ACCs a few weeks ago. Given that, we can feel confident that Somov will be 22-point again in Atlanta. If Lowe is able to match his mid-19 fly split, Louisville will have a middle 100 that no other team will be able to match.

All that being said, Louisville is in excellent position to repeat as national champions, however, they have their work cut out for them in this deep field. They also sit just 0.30 seconds off Texas’ NCAA Record. That record looks like it could fall, especially given the 200 medley relay has now moved to the first event of NCAAs, meaning the entrie field will be fresh for the race.

After the way that their women swam at NCAAs, it is hard to pick against the Louisville men here.

The NC State Wolfpack are seeded 14th with their season best of 1:23.40. While that is their official season best, it’s misleading as to how fast they really are. At the ACC Championships last month, NC State finished 2nd at 1:21.88 but was DQ’d for a false start on the anchor leg. The results initially showed freshman David Curtiss, the anchor, jumping 0.08 seconds early, but the ACC then removed the reaction times from the results.

The Wolfpack finished 10th last year at NCAAs, swimming a 1:23.57 with a team that included Kacper Stokowski (20.61), Rafal Kusto (23.90), Luke Sobolewski (20.29), and Giovanni Izzo (18.77). They’ve upgraded significantly at fly and free this year, with Nyls Korstanje splitting 19.66 on fly at ACCs, and David Curtiss, albeit jumping 0.08 seconds early, anchoring in 18.04. Another thing working in NC State’s favor is that they have a history of swimming well at NCAAs, improving up on seeds and dropping time from ACCs.

The 200 medley relay field is shockingly deep this year, as four teams other than Louisville have swum under 1:22.30 already this season. Florida won the SEC title, putting together a 1:22.06 thanks in large part to Adam Chaney‘s 20.32 backstroke split, the fastest back split of any medley relay in the NCAA this season. The Gators also benefited greatly from Eric Friese‘s 19.64 fly split and Dillon Hillis‘ 23.16 breast split. Florida’s team has the potential to be under 1:22 if their SEC splits hold, since Alberto Mestre was 18.94 on the anchor at SECs, which is one of the slowest anchor legs of any highly seeded relay.

Ohio State was excellent on the front half of their relay at Big Tens, winning the Big Ten title with a 1:22.13 last month. The Buckeyes were led off by US 100 backstroke Olympian Hunter Armstrong in 20.45, with Hudson McDaniel posting a 23.04 breast split. They were also very competitive on fly and free, with Alex Quach splitting 19.92 on fly and Sem Andreis 18.72 on free.

Texas won the Big 12 title with a 1:22.24, with Caspar Corbeau splitting a 22.96 on the breast leg. The Longhorns are also helped by the addition of 5th year Cam Auchinachie, who split 18.60 on the anchor leg. Freshman Anthony Grimm also provided an excellent lead-off, splitting 20.55, which will be highly competitive if he repeats the performance at NCAAs.

Finishing as a close 2nd at SECs, Alabama swam a 1:22.28, making them the 5th seed for NCAAs. They were fueled by the fastest front half of any team in the NCAA this year, with Matthew Menke leading off in 20.67 and Derek Maas throwing down an astonishing 22.63 on the breast leg, for a 43.30 on the first 100.

Indiana swam a 1:22.51 at Big Tens, and given their NCAA-leading 400 medley relays, the Hoosiers certainly can’t be overlooked here. The biggest area of improvement for IU is in the breast split, where freshman Josh Matheny split 23.43 at Big Tens. They have one of the better back halves in the field, with Israeli Olympian Tomer Frankel handling fly duties, and Former Big Ten Swimmer of the Year Bruno Blaskovic on free.

Michigan was 1:22.90 at Big Tens, but they’re hurt by the absence of Wyatt Davis, who is out for this semester and is back at Carmel Swim Club training. Without Davis, the Wolverines are in need of a backstroker, as Nadav Aaronson led them off in 21.43, which just isn’t fast enough to be competitive at NCAAs. Michigan is helped, however, by Will Chan, who split 22.76 on breast at Big Tens, and Groumi Cohen who was sub-20 on fly.

Cal is another team that’s hard to gauge. They swam a 1:23.26 at Pac-12s, which isn’t too eye-popping for the Golden Bears, but given how slowly Cal started at Pac-12s, it’s hard to project how much faster they could be at NCAAs. Let’s start with the positives: we know Bjorn Seeliger will be able to provide one of, if not the fastest free split in the field. Daniel Carr is also dependable for a good back leg, as he’s been 20.62 leading off a relay before.

Stanford had phenomenal performance at Pac-12s, winning the conference title with a 1:22.74. The only mitigating factor in projecting Stanford’s performance for this meet is that they swam so well at Pac-12s, they’ll be hard pressed to match those relay times at NCAAs. Now, that’s not to say it’s not possible that they do, it’s just a very young team. The brightest spot on their lineup is Andrei Minakov, who posted a 19.49 fly split at Pac-12s, which was the fastest fly split we’ve seen in the NCAA this season.

Virginia Tech was 3rd at ACCs, swimming a 1:22.82. They’ll be in the fastest heat at NCAAs, which could actually work against them, since Blake Manoff only led off in 21.40 at ACCs, meaning they might need to spend the rest of the relay digging out of a hole. They do have the fire power to make it work, though, as Carles Coll Marti split 23.11 on breast, Antani Ivanov was 19.78 on fly, and Youssef Ramadan anchored in 18.53.

All relays this year are timed finals, right? Seems like a possible advantage for Cal given their 12 seed. They’ll be in the penultimate heat with (potentially) clean water.

L’Ville and Florida will be tough

Idk if jiang is cracking 20 again, hasn’t looked terribly sharp this season. They’re def still in the running though, I wouldn’t be terribly surprised to see the other 3 legs going faster than that honestly

I think all will be at least a tenth or two faster than that, with caspar and cam potentially both 3-4 tenths faster. I’ll go with 1:20.8 for the win.

Can this event be starred in the total preview index?

Cal’s lack of a sprint flyer is startling.

With the number of men who have already been 19 this year, that’s not really getting the job done unless Seeliger is 19 leading off or 17 closing.

He will be 17 closing

0
-2
Reply
JP input is too short
Reply to  oxyswim

I wonder if they give Trenton Julian a shot at it. He was 22.5 SCM at Worlds in a prelims relay, that’s at least Rose’s level, and it’s not like they need to save him a spot in the 200 FR with four 18 splits already.

This is a big advantage for NC State. They will be the only 1:22, 1:21 relay with nice clean water out front. The Wolfpack takes it home from the early heat.

This is going to be such a fun race!