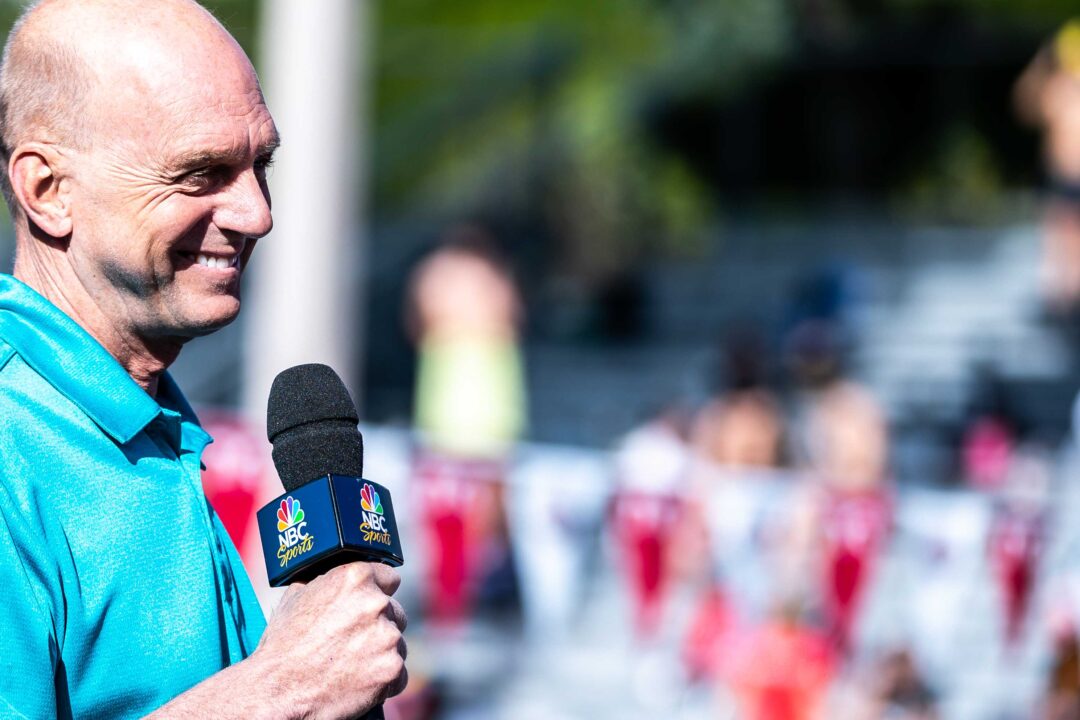 Only one day remains to bid for a wide range of online auction items listed by USA Swimming Foundation as part of its annual Golden Goggles Awards ceremony set for Monday.

This year’s gala will honor the best in American swimming from the prior year at the New York Marriott Marquis. The auction features some intriguing memorabilia and experiences available for purchase. The money will benefit the USA Swimming Foundation’s mission to save lives, build champions, and impact communities through the sport of swimming. The USA Swimming Foundation acts as the philanthropic arm of USA Swimming.

Check out the full list of items up for auction here. Bidding ends at 10 p.m. EST on Monday night.

Vacation with Rowdy Gaines at His Beach House

Ever wanted to get rowdy with Rowdy? Now’s the chance. The voice of USA Swimming is inviting you and three friends to his private beach house located on Little Gasparilla Island in Florida — if you can fork up a few thousand dollars first. The five-day, four-night vacation features water sports such as kayaking, paddle boarding, and fishing as well as a boat excursion to an island restaurant for lunch. He might even analyze your reaction times throughout the day, too. Round-trip boat transportation and all dinner meals are included in the package, which is currently bidding for $3,400. Gaines is offering a separate “Broadcaster for a Day” deal at a 2023 TYR Pro Swim Series meet, with the latest bid coming in at $1,175.

Calling all swim fans and violinists: If you’re a part of the niche crowd who enjoys both hobbies, well, this one’s for you. Three-time Olympian Elizabeth Beisel is offering either a three-hour introductory lesson or full jam session, depending on your skill level. “Any and all abilities are welcome,” the description says. “Fulfillment would happen at any USA Swimming event that both Elizabeth and the winner were present at.” The current bid is $300.

Photographer Heinz Kluetmeier captured the dramatic finish between Michael Phelps and Milorad Cavic in the 100-meter butterfly final at the 2008 Beijing Olympics. Phelps reached the wall in 50.58, edging Cavic by one one-hundredth and setting a new Olympic record. It was the seventh gold medal in Phelps’ record-breaking run of eight. Here, the framed 17×22 photo is signed by both Phelps and Cavic. The latest bid is $3,400, one of the (understandably) pricier items up for grabs.

Might get in trouble if I don’t include this one, but there’s undoubtedly demand for a swim clinic with three-time Olympic gold medalist Mel Stewart along with a Practice + Pancakes feature with SwimSwam video producers. It’s currently commanding the second-highest bid at $4,500, second only to a nine-day cruise around Greece going for $5,000. The in-person clinic will be designed with coaches to fit desired needs, with options for a full team or just an individual swimmer. Bid on the SwimSwam P+P plus Clinic here.

SwimSwam’s HQ is based in Austin, so we know this experience delivers. Go to the 2023 Austin City Limits Music Festival in Austin, Texas in style with this complete collection. It includes two (2) ACL guest passes with access to the Guest lounge, a $100 gift certificate to a local restaurant, plus access to swim at the Westwood Country Club with an Olympic swimmer. Current bid so far is only $1,000 on this item – #40 on the list.

A trio of Tokyo 2020 Olympians are offering items that are currently bidding for less than $300. Drew Kibler is auctioning off a signed “piece of art” that appears to be a photo of lightning over a Midwest summer. It’s going for $270 right now. Natalie Hinds has some home decor available for less than that, and the latest bid for a board game with up to four friends against Zach Harting is just $150. If you can spend a little more, $1,700 is the current bid for golf with gold medalist Ryan Murphy at Palo Alto Hills Golf & Country Club.

Merch from Outside the World Of Swimming

The lineup of non-swimming merchandise is pretty stacked this year. There’s an electric bass signed by Paul McCartney currently bidding for $4,200. For Swifties, a “1989” gold record and signed photo of Taylor Swift is going for $2,275. Lakers fans have a choice between an autographed LeBron James jersey ($2,200) and a signed photo of Kobe Bryant ($2,150). Other highlights include a signed posters for “The Godfather” and “Top Gun” as well as a framed and autographed 11×14 photo of female tennis legends Martina Navratilova, Serena Williams and Chris Evert.

Oh man, did I will this to come true?
I’ll have to see if I can get some buddies on the Masters team to fork over a couple $K’s to get a Philly (actually SJ) P&P. If not, I’ll see if Braden will go to Nova game w me.

Is there an option to have Rowdy NOT be at the beach house for the weekend?

Is rowdy gonna walk around the house in his speedo?

No but he’s gonna annouce you eating breakfast.

I might bid. I really love Rowdy. Downside is I wonder if I can go on vacation and not have a drink

Straight to the comments 😂🍿🙉

Hmm, I’d be interested, but I have to know… what side of the bed does he breathe toward?

Breathing towards the alarm clock is always the most efficient. Limits complete roll-overs in the middle of the night and protects deeper sleep states for sure

Does the Rowdy Gaines tour include a Katie Ledecky meet and greet?

With how obsessed rowdy is with her, I would expect nothing less