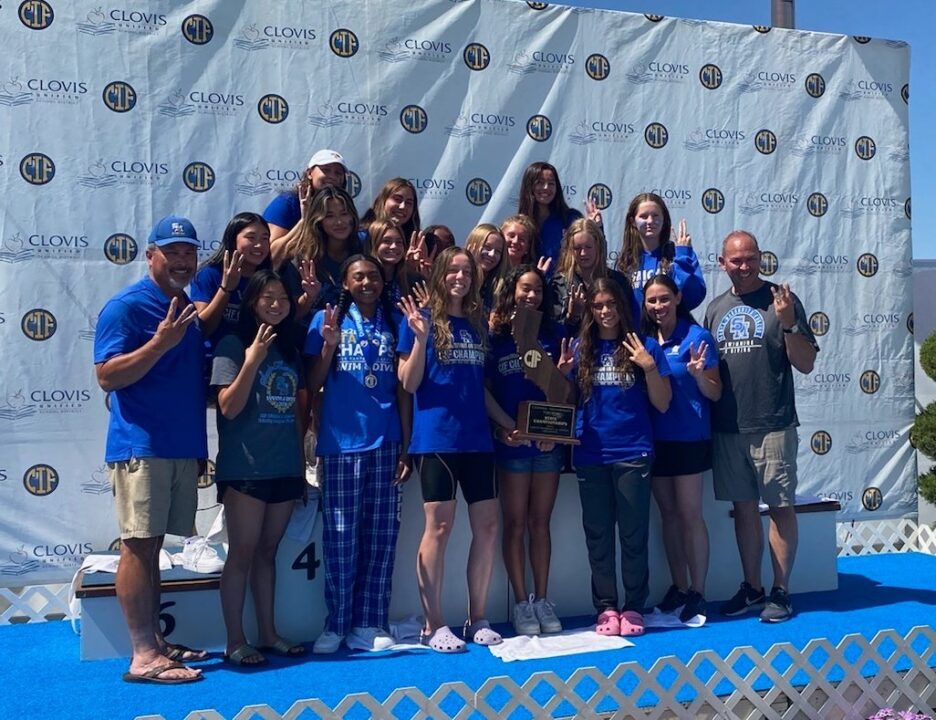 Santa Margarita was dominant in the girls meet, sweeping the relays, winning 6 individual events, and recording a trio of 2nd place individual finishes. Current photo via @SMCHSswim on Twitter

The California Interscholastic Federation (CIF) held its state championship for swimming and diving this weekend in Fresno at the Clovis Olympic Swim Complex.

The meet ended with the Santa Margarita girls cracking the National High School and 15-18 National Age Group Records in the 400 free relay. You can read more about that swim here.

Santa Margarita was dominant in the girls meet, sweeping the relays, winning 6 individual events, and recording a trio of 2nd place individual finishes. The best team performance in an individual event came in the 50 free, where Santa Margarita had 4 swimmers in the ‘A’ final. They were led by sophomore Teia Salvino, who won the race in a new personal best of 22.58. Lindsay Ervin, an STMA senior, took 4th in 22.96, while junior Macky Hodges was 5th in 23.01, and freshman Gracyn Aquino tied for 6th in 23.27.

Santa Margarita freshman Teagan O’Dell was phenomenal this weekend, winning both her individual events in personal best fashion. She started in the 200 IM, where she would roar to victory in 1:55.15, chipping 0.31 seconds off the 1:55.46 she swam last weekend. O’Dell was incredible on the backstroke leg of the race, splitting 27.46, which would end up being slightly faster than her freestyle split of 27.48. Additionally, O’Dell’s swim ties her for #10 all-time in the 15-16 age group at just 15 years old.

O’Dell would go on to win the 100 back in 52.27, again chipping the 52.31 she posted the week previous. As just a freshman, O’Dell broke the CIF State Meet Record with the performance, also rising to #30 all-time in the 15-16 age group. Teammate Macky Hodges would take 2nd, swimming a new personal best of 53.50.

Santa Margarita senior Justina Kozan was another double event winner on the day, taking the 200 free and 100 fly. In the 200 free, Kozan went head-to-head with Saint Joseph’s Claire Tuggle, also a senior. Kozan established her lead on the first 50 of the race, splitting 24.65 to Tuggle’s 25.27. The pair would essentially match each other’s splits on the middle 100 of the race, then Tuggle would come home a tick faster on the final 50. In the end, Kozan swam a 1:44.63, touching just ahead of Tuggle (1:44.97). For Kozan, the swim was just off her personal best of 1:44.40, which she swam at the CIF State Champs last year. Tuggle’s swim came in just 0.01 seconds off her personal best of 1:44.96, which she swam at the 2018 NCSA Spring Championships when she was 13 years old. The performance is also Tuggle’s 2nd fastest of her career, her 2nd time under 1:45, and the fastest she’s swum in the event in 4 years.

Loyola won the boys team title handily despite not having a 200 free relay in the meet. Ordinarily, missing a relay would make it extraordinarily difficult to win a team title at a high school state meet, but victories in the other two relays, as well as 8 individual ‘A’ finals appearances was enough to put Loyola comfortably over the edge.

In the most anticipated boys race of the meet, Sonora’s Matthew Chai beat out Maurer in the 500 free, speeding to another personal best of 4:15.09. He again managed to negative split the race, swimming a 2:07.70 on the first 250, then coming home in 2:07.39 on the back half. With the swim, Chai moved up to #5 all-time amongst high school performers in the 500 free.

Harvard-Westlake’s Ronald Dalmacio, a senior, took the 100 back in 48.08, establishing a lead on the first 50 and holding it through the finish.

Buchanan senior Colby Hatton threw down the gauntlet in the 400 free relay, anchoring his team in a blistering 42.87 to help the squad to a 10th place finish. Hatton’s split was by far the fastest in the field, and comes in well under his flat-start personal best of 43.96. Hatton is set to begin his collegiate career with Cal this fall, where it appears he will be adding to the legacy of great Cal sprinters.

Wow looking at the breaststroke/freestyle finals and each swimmers progression, it’s absolutely nuts to see how quickly they improved in under 8 months or so. eg. Daniel Li, Andrew Ko, Anthony Sebastian, Zachary Elian, and Ethan Harrington. What the hell are they doing down there in Socal. Never heard of these kids and they just absolutely explode.

Don’t know about these swimmers in particular, but as a California resident, things have been pretty shut down for a couple years. Even when pools were open, space was limited. There were fewer meets. Things have only recently been more normal. For some of these swimmers, this may be their first complete season of training and racing since 2019.

Zachary Elian is from Northern California. Swims on Walnut Creek Aquabears. He is a stud!! Great kid and athlete! He’s from a program that instills having fun while swimming fast.

Ethan and Anthony are also from Northern California.

Worth mentioning that Colby Hatton anchored Buchanans 4 free relay in 42.8