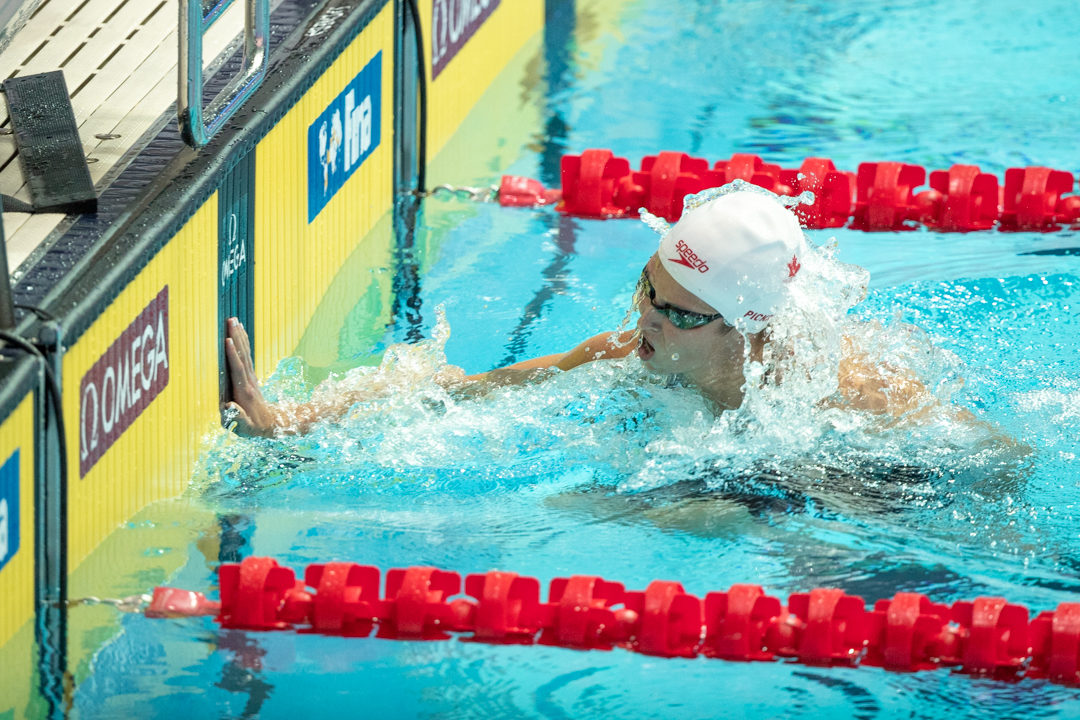 The first finals session of the 2022 Canadian Trials is here, and with it we'll see finals of the women's and men's 200 IM, 100 back, and 400 IM. Stock photo via “Rafael/Domeyko Photography”

The field was tight in the women’s 200 IM this morning, with Mary-Sophie Harvey posting the top time with a 2:13.41. Sydney Pickrem and Bailey Andison are the only swimmers in the field who have been under 2:10 in the event before, so we’ll see if they can clinch the World Champs roster spots here tonight.

Jacob Brayshaw downed his morning time by 4.33 seconds to earn the national title in the men’s 50 breast.

Final results are determined by the points, rather than final time in para swimming. The points system is based off how close the swimmer gets to the World Record for each class. That being said, Tess Routliffe took 3 seconds off her prelims performance, swimming a 1:33.80 to win the title.

After breaking the Canadian Record this morning, Nicholas Bennett nearly did it again, taking the title in 1:05.65.

Youngster Ashley McMillan pushed the pace early, getting out to a lead on fly with a speedy 27.60 split, then expanding her lead on the backstroke leg. Veterans Sydney Pickrem and Mary-Sohpie Harvey were able to run McMillan down on the breast leg, however, both turning ahead of McMillan for freestyle. Tessa Cieplucha made a late charge, but was unable to get up with the leading duo. She did, however, get in ahead of McMillan, who finished 4th in 2:13.02.

Canadian Record holder Sydney Pickrem got the job done, taking over on the breaststroke leg and battling Mary-Sophie Harvey into the finish. Pickrem’s time tonight is the fastest time in the World in 2022, while Harvey’s is good for 4th. For the 2021-2022 season, which began on Septemeber 1, 2021, Pickrem’s time is 3rd in the world, Harvey 6th.

Notably, both Mary-Sophie Harvey and Ashley McMillan are slated to race in the A final of the 100 back later in the session.

Collyn Gagne put together a great back half, even slightly out-splitting Knox on breaststroke with a 34.26. He posted a huge new personal best of 2:00.37. Unfortunately, his time wasn’t under the FINA ‘A’ cut of 1:59.76, so he won’t be on the World Champs roster in the event.

Canadian Record holder Kylie Masse left little doubt that she would be punching her ticket to the World Champs in this event, getting out to a lead almost immediately. After swimming the #2 time in the world this year in prelims (58.41), Masse matched the swim, coming in at 58.48 tonight.

Taylor Ruck swam a fairly lackluster 1:00.73 in prelims this morning, but was able to turn it on tonight, edging out Ingrid Wilm at the finish. Ruck swam a 59.67, just ahead of Wilm’s 59.75.

Notably, Mary-Sophie Harvey displayed her toughness, coming back after qualifying for the World Champs team in the 200 IM shortly before. She raced to a 4th place finish with a 1:00.90.

It was a tight finish between Javier Acevedo and Blake Tierney, with Acevedo getting his hand on the wall first in 54.37. The time matches Acevedo’s 2021 season best of 54.31.

Unfortunately, none of the men in this final were under the FINA ‘A’ standard, meaning they are not eligible to compete in the event at World Champs. Acevedo could potentially be named to a medley relay, however, if Canada is able to qualify one.

It’s worth mentioning again that this race was notably without Canadian Record holder Markus Thormeyer, and rising star Cole Pratt, both of whom stood excellent chances of qualifying for Worlds.

In the B final, Polish swimmer Kacper Stokowski, who trains at NC State University in the U.S., edged out Greek national Evangelos Makrygiannis at the finish. Stokowski clo0cked a 54.17, Makrygiannis 54.43.

15-year-old phenom Summer McIntosh broke the 2nd Candian Record of the session, roaring to a 4:01.59. With the swim, McIntosh has now become the fastest Canadian ever by a larger margin. She has also risen to #11 all-time in the event worldwide. McIntosh’s time puts her 3rd in the world this year, behind only Ariarne Titmus and Katie Ledecky, the top two performers all-time in the event.

Behind McIntosh, it was the fellow junior swimmers who showed out. Katrina Bellio clocked a personal best of 4:11.06 to finish 2nd, while Ella Jasen swam took 5 seconds off her personal best to finish 3rd in 4:11.15

Emma O’Croinin, the #2 seed coming into the meet, and the only swimmer outside of McIntosh who has been under 4:10 before, swam a 4:15.14 tonight.

In an absolute barnburner, Jeremy Bagshaw just managed to get his hand on the wall first, swimming a 3:52.01. The veteran was 1.64 seconds faster than this morning, winning the national title. Unfortunately, the FINA ‘A’ standard sits at 3:48.15, well ahead of anyone in the field tonight.

More importantly or at least just as important for Canadians who is under the qualifying times for the Commonwealth Games.

Couldn’t believe my eyes when I saw Bagshaw’s name. When is this guy retiring?

omg, late to this, but Acevedo is sooooooo close to getting that A cut…

I’m more impressed with the 1:57.50 than anything else. Everybody knows what McIntosh is capable of. But those individual medleys need to be taken seriously by the world. Shove the caliber up and the A standards down. Two minutes should be out of camera in relation to the winner.

Great swim for McIntosh. I thought she’d be a little faster, but it’s a Canadian record and she has a long time to get faster.

A lot of times people put pressure on athletes at young ages, and (usually before Olympic years) they will do amazing things, and gather everyone’s attention. Then when the actual Olympic year comes around, it’s impossible to approach what they had last year. Example: Becca Mann and Claire Tuggle. It’s about peaking at the right time

Summer very close to under 4:00! I bet with some competitors she’ll have it

7 swimmers in the history of this event were closer to breaking this prestigious barrier than Summer McIntosh is now. That never happened to them. Joanne Jackson, Leah Smith and Rebecca Adlington were less than a second away but still… Don’t underestimate the difficulties of improving the personal best at that level of performance. Her recent unexpected huge improvement in 400IM made people to believe that any other her events will follow at the same pace of improvement. Maybe it isn’t the case. The 400IM is very specific kind of races and the progress there maybe more possible than in refined to the smallest details particular stroke. Both Hosszu and Ye when making huge jump in personal best in 400IM… Read more »

She probably would’ve been very fast in the 400 IM last year if she swam it so the time drop was probably more her 400 IM catching up to her 400 FR after having not been swum in competition for two years and some improvement in her breaststroke.

So … not unheard of.