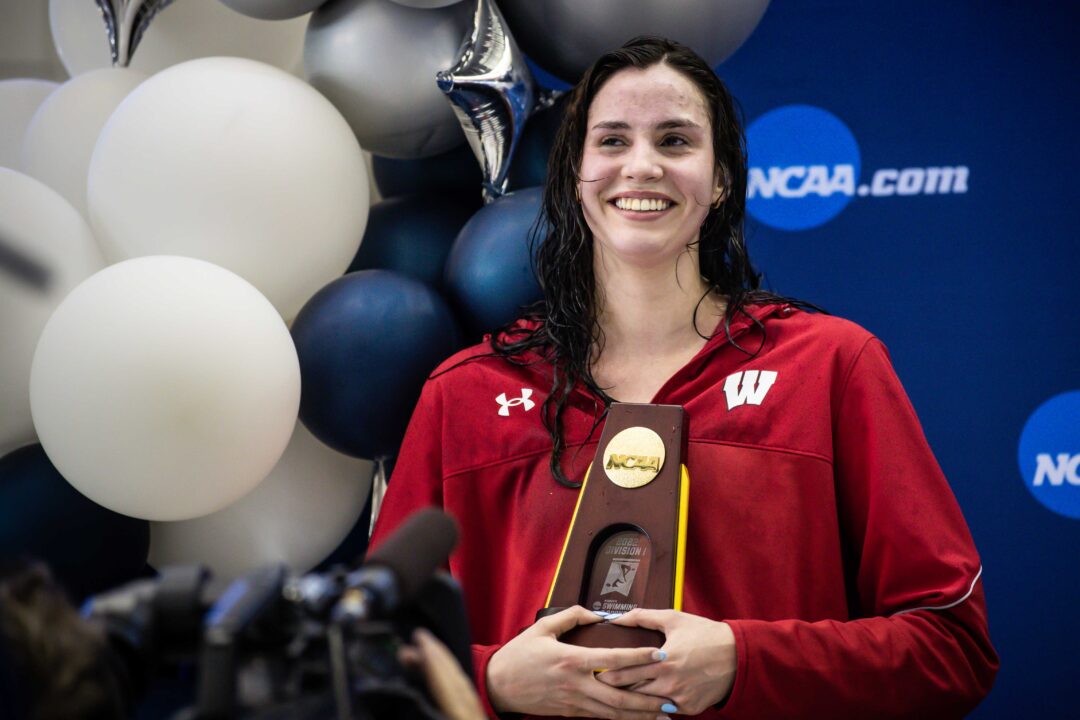 McKenna won the NCAA title in the 1650 free at the 2022 NCAA Championship meet two weeks ago, swimming with two torn labrums. The labrum is the cartilage that reinforces the joint of the hip.

On Tuesday, McKenna underwent a hip arthroscopy, where doctors repaired the torn labrum in her hip and shaved down the extra bone that was causing the tearing.

In her post-mile interview at NCAAs, she said that she took up running during the pandemic and after running one time, she noticed pain in her hips. She pushed through increasing pain until she came to Wisconsin, where doctors discovered that she had a torn labrum in her left hip.

Then, a month before NCAAs, her right hip began to hurt, and she found out that she had a torn labrum in that hip too.

At the time, she said that surgery was an option, but that she hadn’t made a decision on that yet. She had been getting numbing injections in her hip to allow her to continue to swim.

The post-surgery prognosis is 3 weeks on crutches, followed by a return to the water in 3-4 weeks mostly focused on pulling with no turns or kicking. She says that likely means she’ll be in an endless pool.

She’s not sure when she’ll be cleared for racing, but the total recovery time to be cleared with no restrictions is 4-6 months.

That still means she’s out for the upcoming USA Swimming International Trials. At last year’s Olympic Trials, McKenna finished 34th in the 400 free, 29th in the 800 free, and 18th in the 1500 free. Her best time in that 1500 free would have placed 10th at the meet.

That should mean she’ll be ready in time to go full bore for the 2022-2023 NCAA season, if not shortly after the start, with a chance to defend her title in the mile.

Wow – She goes from 18th at Trials to NCAA Champion!! IMPRESSIVE!

Allie Raab just posted that she had the same surgery. Didn’t realize this was a common injury among swimmers.

It’s more common than you would think. I coach a high school team and I’ve had 2 girls have that surgery in the past few years. One was a club team swimmer and the other one just did summer league and high school team.

I think at least one of the Campbell sisters and eamon Sullivan in Australia have had the same surgery, as well as Kate Haywood and Sophie Allen from the UK. It seems to be quite a common injury for swimmers.

Just to clarify, it is not a swimmer injury. It is generally a result of misshaped femoral head that wears out the cartilage over time (or a traumatic injury). E.g., genetics play a big role. Its become more common in the last 15 years as orthopedic tools have become available and more surgeons have learned how to perform the procedure.

I had mine done 10 years ago. First 4-6 weeks are rough, but if you follow the recovery protocol it can be a very successful procedure.

The fact she trained and raced (successfully!) is quite impressive. It can be very painful.

Any idea where the surgery was done?

Didn’t you read? On the hip.

Question relates to what medical facility, not body part. Duh.

My daughter, a swimmer as well, just found out she also has a tear on her right hip labrum. Anyone know the medical facility she used for this?

Hell hath no fury like a swimmer with two untorn labrums

They only repair one at a time, so she still has one torn one for now. Sometimes it’s manageable without surgery, but she may end up getting the other hip done at some point.