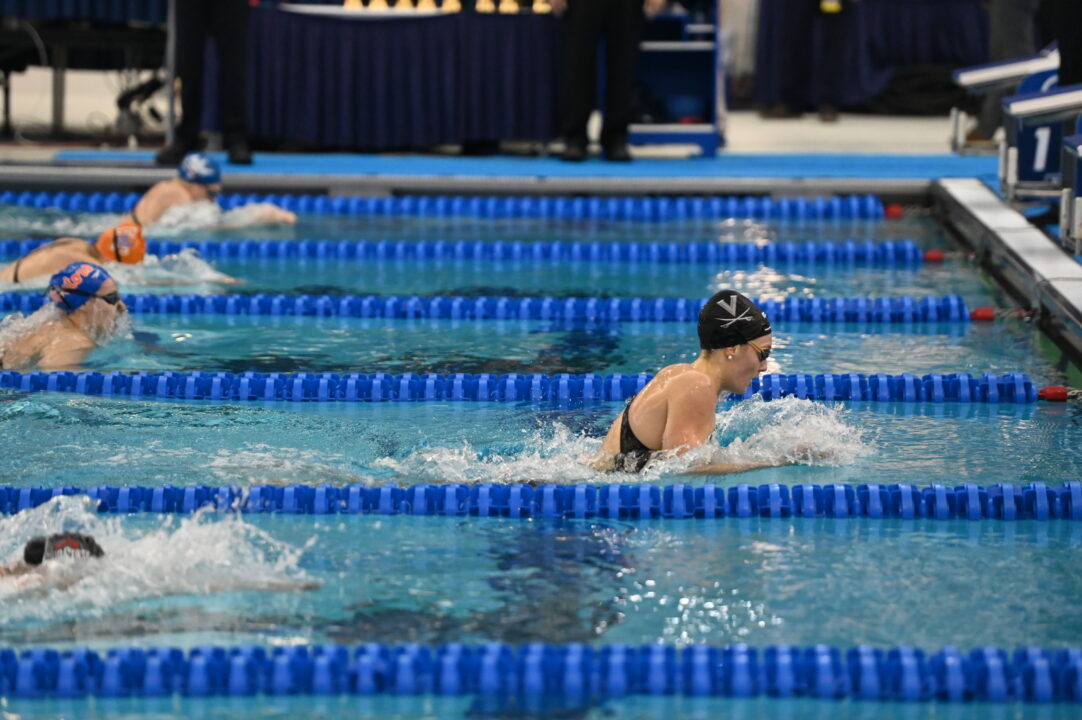 It was a big day for the ACC - Virginia and NC State lead the nation with 4 A-finalists apiece on day 2 of the women's NCAA Swimming & Diving Championships. Current photo via the NCAA

It was a big day for the ACC – Virginia and NC State lead the nation with 4 A finalists apiece on day 2 of the women’s NCAA Swimming & Diving Championships.

Virginia also has one B finalist, tying for the national lead with 5 individual scorers set up for tonight. Cal also has five, though Virginia has twice as many A finalists. The Cavaliers have 4 up and 1 down, while Cal has 2 up and 3 down.

A few other notes:

No official points enter the books until tonight’s finals. But if every swimmer were to hold their place from prelims, here’s how each team would score in these three individual events tonight.

Note: these do not include last night’s 800 free relay, nor do they include tonight’s two relays, or the 1-meter diving event.

Here’s what the total running points would look like tonight, including the 800 free relay, if all swimmers kept to their places from this morning:

Looks like Texas has 1 finalist in the 1m diving; Cal none, UVA none, NCSU none; Georgia none, OSU an 11th

Texas lost potential B finalist in the last diving round, O’Neill dropped from 12 after 5 to 18 after 6 round

That’s such a bada$$ photo of Walsh

Amazing the balance among teams – not like some past years where a few team were placing 2-4 swimmers in each final. And times are very close, particularly for B finals – a few tenths makes the difference.

Interesting. It’s not looking very balanced from where I’m sitting but maybe I’m biased. I’m a little overwhelmed by Virginia’s potential dominance tonight. Really looking forward to the first individual finals in 2 years and the possibility of a Bear or four playing spoiler. Go Freaking Bears. See you all in 3 and a half hours.

Which relay? The Cal 50 freestylers didn’t do so well this am while NCSU put 2 in the A. With Rowe having been 21.4 earlier this season and Hanson 21.8, the Pack might give VA a run in the 200 free relay.

As a Cal Fan I’m ecstatic UVA is killing it! But also Go Bears!!!!

This is very contradictory. 🐻

That 800 Free relay is going to haunt the Pack on Saturday…. I still don’t understand why they didn’t swim Alons and Berkoff to keep that relay in top 3-5.

They are seeded 11th in the 400 Fr Relay WITHOUT Alons and Berkoff.

3 of the others will stay the same, only the 400 Fr will be better, I don’t think they make up the 25+ points they would have gotten. However, its easy to armchair this after the fact so I can’t blame the coaches for doing what they thought was best.

Don’t forget that they lost Heather MacCausland for this meet. So, they had to do something to shift their relays around. They were honestly a sprinter short of being able to wedge someone in there without sacrificing a relay – so they just decided to go all-in on 4.

We can look back at how it shakes out post-meet, but their hand was forced a little.

Yes I know that. When I saw the news, I was thinking Hansson will be able to replace MacCausland in the 400 free relay. She’s split 21.8 in the relay and has the range to go up to 200. MacCausland was big for them at ACC, but Hansson can easily matched 48 free split.

Sending positive vibes to Heather. She had a great ACCs and it’s a tough blow to not be able to compete in NCAAs a second year in a row.

It should also be noted that in some ways it changes the event load for Alons and Berkoff.
They both made the A final in the 50 this morning; Coach Braden may have had that in mind when putting the relay lineups together. Both Alons and Berkoff moved up from their seed times, and in KB’s case, that locked in A final points. Getting 7th in the morning is really good when you are seeded 9th.