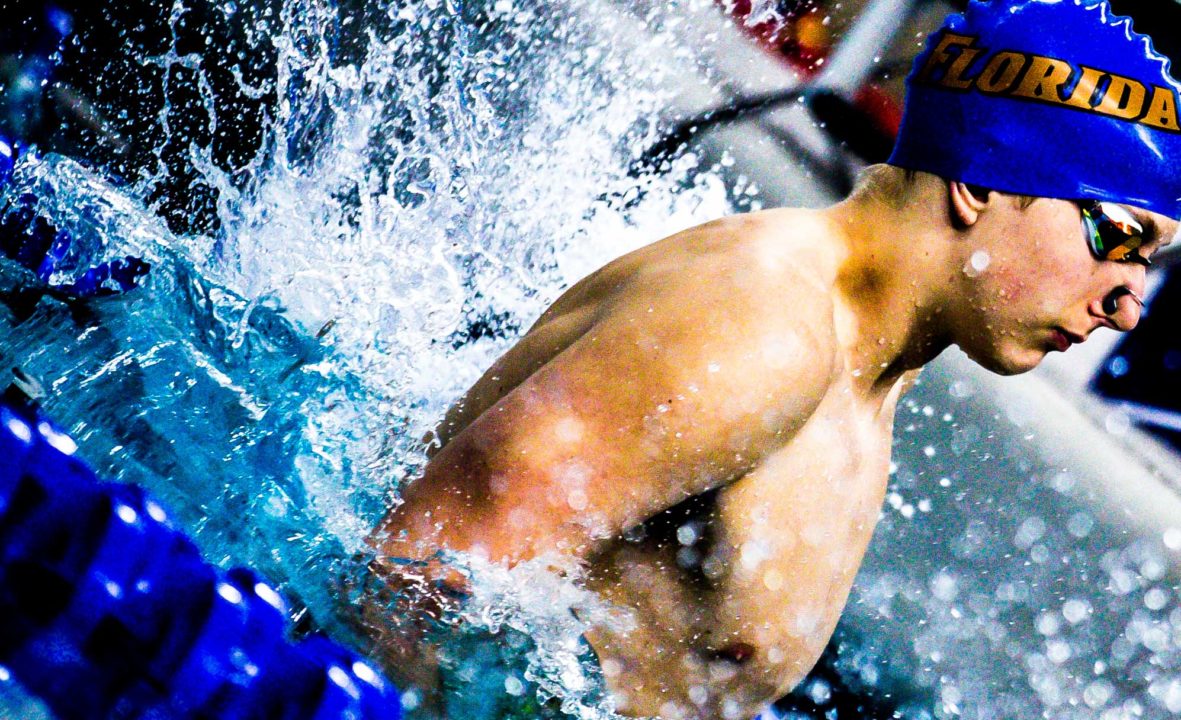 NCAA 200 free leader Kieran Smith will see how far he can push Florida in the 800 free relay tonight as the NCAA Men's Championships kick off. Current photo via Jack Spitser/Spitser Photography

While Florida’s Kieran Smith could light things up on the Gator relay, Texas holds the top seed in this race by over four seconds, and they’re the heavy favorites to clinch the first race of the evening. The final heat will be a barn-burner, as Texas will be joined by Florida, Cal and Texas A&M to close the night.

The Longhorns return Drew Kibler and Austin Katz from their record-breaking relay in 2019, and Kibler sits #2 in the country in the 200 free individually, behind Smith but over a second ahead of anyone else.

Six heats will run tonight, as relays will compete in every other lane to adhere to social distancing protocol this week. Per a tweet from commentator Rowdy Gaines, the final heat will see lead-offs from Smith (Florida), Kibler (Texas), Shaine Casas (Texas A&M) and Trenton Julian (Cal). Smith, Kibler and Casas are the fastest 200 freestylers in the country this season (in that order).

Luke Miller led off NC State in 1:32.55, just ahead of Michigan’s Patrick Callan (1:32.63), but the Wolfpack took off, all of their splits under 1:34. Hunter Tapp bookended with a 1:32.44 on the end to pair with Miller’s 1:32 up top. Georgia and Stanford went 2-3 in the heat to move to 2-3 overall in all heats swum, with UGA breaking the school record and getting a 1:32.17 anchor from Luca Urlando and Stanford getting a 1:32-mid splits from Preston Forst and Grant Shoults.

NC State and Georgia dropped from seed, the Bulldogs by 1.6 seconds, while Stanford gained .1.

Ohio State kicked off heat four with a lead thanks to senior Paul Delakis at 1:31.93. Things tightened up, and they were suddenly trailing Virginia Tech and Indiana going into the final leg. Indiana prevailed at 6:14.68, with Virginia Tech just behind at 6:15.19.

Alexei Sancov was 1:31.82 leading off USC, his first time under 1:32. But Louisville took over the lead on the second leg, and they ran away with it. The Cardinals posted a 6:13.72, dropping three seconds from seed, while Virginia took second in the heat and second overall (for now) at 6:16.44. Nicolas Albiero was 1:32.77 leading off and Colton Paulson was 1:32.77 on the second leg for Louisville, while Matt Brownstead was a surprising name leading off UVA with a new best by three seconds: 1:33.16.

Louisville’s time would hold up through the end of the night, good for eight overall with all the heats concluded.

Notre Dame clocked a 6:18.04 for the heat two win, getting a 1:33.58 lead-off from Jack Hoagland and a 1:33.58 anchor from Sadler McKeen. Batur Unlu swam a big 1:32.27 for Georgia Tech to hand them an early lead, which is a lifetime best and breaks his own school record. That’s big for the freshman in his first NCAA race.

Tomas Sungalia was strong leading off UNC to an early lead, touching in 1:33.36. Wisconsin’s Andrew Benson pulled the Badgers into the lead on the second leg, though, and Wisconsin continued to build that margin through to the finish. Wisconsin clocked a 6:19.34 for the heat one win, dropping from their seed of 6:20.24. Freshman Jake Newmark was 1:33.89 for the Badger lead-off.

Florida State was DQ’d for an early exchange.

In total, seven of the top eight teams dropped from their seed. Bigger picture, though, 11 out of the 22 teams with legal swims added time.

TEAM SCORES (THROUGH DAY ONE)

My many takeaways that nobody asked for:
1. We were right to question Katz this season, that last 75 of his leg looked brutal
2. I think kibler overswam the first 50 of his 2 free and if he backed off that maybe he’d be a little closer to Kieran at the end (but also I’m not His coach, just a thought tho)
3. Cal looking good across all of their legs, Not sure what those guys’ bests are but the relay as a whole was great.
4. Casas 2 free makes me think he’s gonna threaten some records this weekend and I’m thinking he’ll be right on dressel and seliskars 2 IM time tomorrow
… Read more »

Kibler was deeeeefinitely hurting at the end, he looked much lower in the water the last 50 compared to his first 50

Great splits from versatile freshmen Lasco, Urlando, and Foster. And Foster safe on the exchange.

Hard to judge on one race with only a few swimmers, but Cal splits showed more improvement from seed. Given how tight the meet projects against Texas, that bodes pretty well

They had ground to make up.

To me, Cal’s improvement puts them back to event. Now, it’s a battle down to the finish.

For all the people complaining about Katz, his best split ever is 1:31 high but typically he splits 1:32 low. Almost all of the difference came in the first 100 where in the past he’s been out in 44.0 instead of 44.9. Maybe he didn’t meet YOUR expectations so that Texas broke the record but it was still a solid swim when put in context.

he was 2.5 seconds slower than his backstroke rival. How is that for context?

Katz isn’t as good of a freestyler as Casas. This was true before tonight and it’s true after tonight

Casas was a 133+ the year that Katz was 1:31 so what you are saying isnt necessarily true before tonight. We are a talking a 5 second swing which will probably be the same swing for the 2 backstroke but I suppose a 138 and third place ain’t bad.

Nah, Katz might not have what it takes to beat Casas given his mediocre swim tonight, but he can still put up a 1:37 no problem.

120+ comments about 1 event.
Looks like people have been waiting for this. 🙂