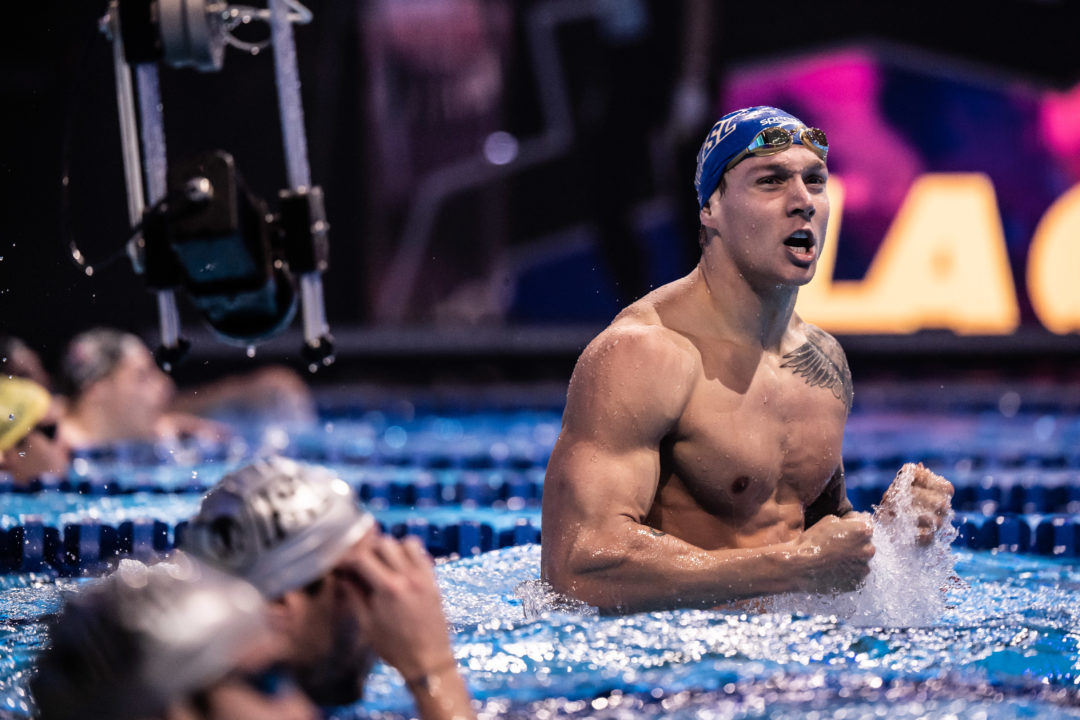 Cali Condors' Caeleb Dressel will make his season 3 debut in the 100 fly, 50 free, and swim both in the 4x100 free and medley relays. Archive photo via Mike Lewis/Ola Vista Photography

Cali Condor front-runner Caeleb Dressel will be making his ISL season 3 debut with his match 2, day 1 entries in the 100 fly and 50 free.

In the fly, Dressel will swim alongside teammate Marcin Cieslak and LA Current powerhouses Tom Shields and Maxime Rooney. Dressel is also expected to swim in both relays. He will anchor the free relay following teammates Jesse Puts, Kacper Majchrzak, and FR/BKer Justin Ress. Dressel will swim fly in the 4×100 medley relay alongside BKer Coleman Stewart, flyer Oleg Kostin on the breaststroke leg, and anchor Ress.

Another Cali Condor star, Lilly King, is set to begin her ISL season 3 debut with entries in the 200 breast, 50 breast, and of course the 4×100 medley relay. The Cali women’s 4×100 medley relay will feature an All-American quartet of Beata Nelson, King, Kelsi Dahlia, and Erika Brown.

LA Current star Beryl Gastaldello will make her season 3 debut starting off with the 50 free alongside Abbey Weitzeil. More known for the 50 fly, LA will swim Helena Gasson and Anna Ntountounaki in lieu of Gastaldello. The Frenchwoman will also swim the anchor freestyle leg in the 4×100 medley relay.

We will also get a glimpse of the Tokyo Frog Kings’ re-loaded women’s freestyle force in the 4×100 free relay event, featuring Japanese Chihiro Igarashi and Americans Paige Madden, Aly Tetzloff, and Gabby DeLoof. Madden will also swim the 200 back and 400 free, one of her signature events, in her ISL debut.

Schouten is a member of the Breakers’ women’s breaststroke group. In for the women’s breaststroke events will be Molly Renshaw, Abbie Wood, and Sarah Vasey. Cheruti is the No. 1-ranked member for both the 50/100 free on the Breaker’s ISL depth chart. Teenager Jacob Whittle will be entered in the men’s 50 free. Meanwhile. Clogg and Tomac are the Breakers’ No. 1 and No. 3 men’s 200 backstrokers, putting slight pressure on FR/IMer Brandonn Almeida.

Wow, he’s already there! Wasn’t too much of a break.

Does CBC work for watching today or only CBS?

Will we see a world record ?

No way, he just came off the olympics and I doubt he’s been back in the water much. But it is caeleb so who knows

Unlikely, since Dressel doesn’t usually swim great in-season and the playoffs are still months away.