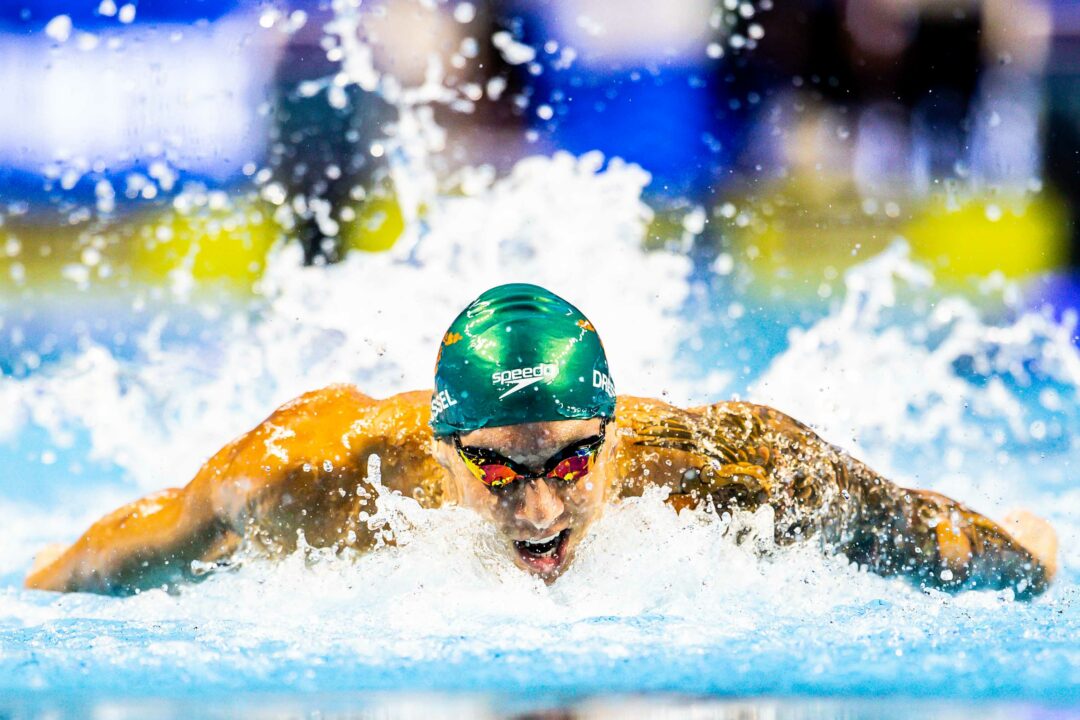 When Olympic legend Michael Phelps retired following the 2016 Olympic Games, many were left wondering, “who’s going to take over the American butterfly legacy?” At the time, there were many contenders, but nobody seemed to be the apparent heir to Phelps’ throne.

Then, at the 2017 NCAA Championships, Caeleb Dressel dropped a time of 43.58 in the 100 yard butterfly to shatter the US Open record. Traditionally a sprint freestyler, Dressel’s performance was eye-popping to many swim fans, who began to see him as America’s next butterfly superstar. However, many still held their doubts surrounding how he would translate that to a long course pool. Dressel again proved them wrong, dropping a time of 50.87 at the 2017 World Championships Trials, the fastest time in the world for that season. In his explosive performance at the 2017 World Championships, Dressel obliterated the field in the 100 butterfly, nearly taking down Phelps’ world record in a time of 49.86 to win his first World Championship’s title in the event.

After an injury hindered his performances in 2018, Dressel entered the 2019 World Championships with a heavy weight upon his shoulders. He did not disappoint at the meet as he posted a time of 49.50 in the semi-finals of the 100 butterfly to take over 3 tenths of a second off Phelps’ World Record, later winning gold again.

Coming into the Olympics, Dressel is the clear gold medal favorite in this event. No other active swimmer has been within .6 of Dressel’s world record, and he currently holds 7 of the 10 fastest swims of all time. At the 2021 US Olympic Trials, Dressel posted a time of 49.76 in the 100 butterfly for the 3rd fastest performance of all time. Considering that Dressel was probably not fully rested for Trials, his results in Tokyo could be on another level.

Since 2016, only 15 swimmers have been 51.00 or faster in the 100 butterfly, including the aforementioned Dressel, with several of them not even contesting the event in Tokyo.

Hungarian Kristof Milak is the only swimmer to come within a half second of Dressel during that time period. At the 2021 European Championships, Milak swam to a final time of 50.18 in the event, making himself one of the fastest performers in history in the process. The current World Record holder in the 200m butterfly, Milak has great stamina, but lacks the opening speed to keep up with Dressel on the opening 50. However, if he is with Dressel at the end of the race, Milak will definitely find himself on the podium.

In 2017, Mehdy Metella appeared to be Dressel’s biggest threat in this event. However, he fell victim to several shoulder injuries that hindered his performance in 2018 and 2019. Despite this, Metella recently proved that he is still not out of contention for an Olympic medal, swimming a time of 50.87 at the French National Championships last month. For Metella, his time ranks him as the 5th fastest performer since Rio, and puts him at the 5th fastest swimmer in the world this year. Assuming he is still building back from his injuries, Metella may have more left to show when he arrives in Tokyo.

Australia’s Matthew Temple is also ranked within the top 5 performers in Rio, placing 3rd with his time of 50.45 from the Australian Trials meet. Temple’s time from that meet shattered the Oceania Record in the event, making him the fastest Australian man to ever swim the race. At only 22 years-old, Temple is in his swimming prime, meaning he could feasibly improve his time even further over the course of the Olympic Games. If he is able to do so, Temple should push himself into medal contention.

Another “young-gun” to watch for is 18-year-old Josif Miladinov, who won a silver medal in this event at the 2021 European Championships. At those Championships, Miladinov posted a time of 50.93, only coming in behind Milak. This currently ranks him as the 6th-fastest performer since the Rio Olympics, making him a definite contender for the final in Tokyo.

The nation of Japan has two strong entrants in this event via Takeshi Kawamoto and Naoki Mizunuma, who both will have a big advantage in competing in their own nation. The two swimmers, who hold best times of 51.00 and 51.03, respectively, will not be affected by travel requirements nor time zone differences, things that the other athletes will have to accommodate for. Although there will be no spectators at the Games to cheer for them, both swimmers should have a great opportunity to make the final in such a familiar atmosphere.

Multi-time World Champion James Guy is another contender in this event, who could have a huge impact if he is “on-form”. Guy, the 2017 World Championships bronze medalist, hasn’t been swimming as well in this event over the past few seasons, failing to medal in any individual events at the 2019 World Championships. However, Guy has already been as fast as 50.96 this season, and holds the 6th-fastest time worldwide since Rio. If he hits his taper correctly, there is no doubt that Guy can charge into the wall for a spot in the podium.

Two former Olympic Champions may also find their way into the final. In 2012, Chad le Clos shocked Phelps by out-touching him for olympic gold in the 200 butterfly. Although he was unable to repeat that feat in Rio, Le Clos did make the podium in the 100m butterfly, tying for a silver medal. During this Olympic quad, Le Clos’ best time stands at a 50.65 from 2018, but it may take much more than that to repeat his silver medal finish in Tokyo.

Just like Le Clos did in 2012, Joseph Schooling upset Phelps for Olympic gold in 2016, winning the 100m butterfly in a new Olympic record of 50.39. However, Schooling has not neared that time since 2016, and hasn’t made an international podium in any event since then. Having been relatively quiet over the past year, it is difficult to predict where Schooling will be in Tokyo, and if he’ll be able to shock the field once again.

There are several other swimmers who have been between 51.0 and 51.5 over the past year, all of whom may push for a spot in the final in Tokyo. These include Andrei Minakov, Tom Shields, Jakub Majerski, and Federico Burdisso. Minakov, in particular, is a huge medal threat in this race. The reigning World Championship silver medalist, Minakov holds a personal best of 50.83, which puts him right in the thick of things in Tokyo. Plus, at only 20-years-old, Minakov most likely has room to improve upon that time.

Darkhorse Pick: Noe Ponti (SUI)- NC State commit Noe Ponti has been on a tear recently, posting several 51 second performances in the 100 butterfly over the past few months. Prior to the pandemic, Ponti’s best time rested at a 52.70 from 2019. Since late 2020, he has managed to bring it down to a 51.15, putting him just outside of the top 10 performances in the world this season. Ponti just recently turned 20-years-old, meaning he could be in the position to drop significantly more time from his personal best in Tokyo.

following the trend of the last 2 olympics, I’m predicting a 4-way tie for silver

If Michael Andrew was allowed to race in 100m butterfly, despite the tight schedule.

To beat Dressel at his best, Milak would have to go out like ’09 Phelps in 23.3 and probably come back sub26. Going out in 23.3 is probably achievable considering he’s been 23.5, but doing both is probably going to be extremely difficult.

But there’s hope. It’s clear that Milak is swimming significantly faster times in-season than he was in 2019. Milak also seemed to have some questionable swims at the beginning of European Championships, so its unlikely he was fully tapered, and most likely hadn’t started an intense block of speed work. It’s obviously more likely for Milak to win if Dressel is gassed at the end of the week and ends up going a 49.6 or 49.7

I truly believe Tokyo will be Dressel’s magnum opus. But I don’t see him going sub-49 in the 100 fly like some people have been alluding to. Here are my predictions:

Good guy Dressel leaving the WR for Popovici to break?

Or with more possibility Chalmers. I don’t see Popovici dropping another .4 of a second.

I don’t see it either either but I think if Chalmers or Dressel break the WR it won’t be by much and they won’t keep it long term.

Not doubting that, but I don’t think this is the end for Chalmers & Dressel. Maybe Popovici will take over, but just saw an interview with him with Brett Hawke & he likes the 200 better & I think he’s more suited for 200 free. However, not doubting he could be 100 free WR too.

I know! What a true Chad!

Oh c mon now he’s gonna be much faster than all those times.

No suspense in the men’s 100 fly.
Mr Dressel will easily win the gold. With icing on the cake a new world record.

Some great races there.