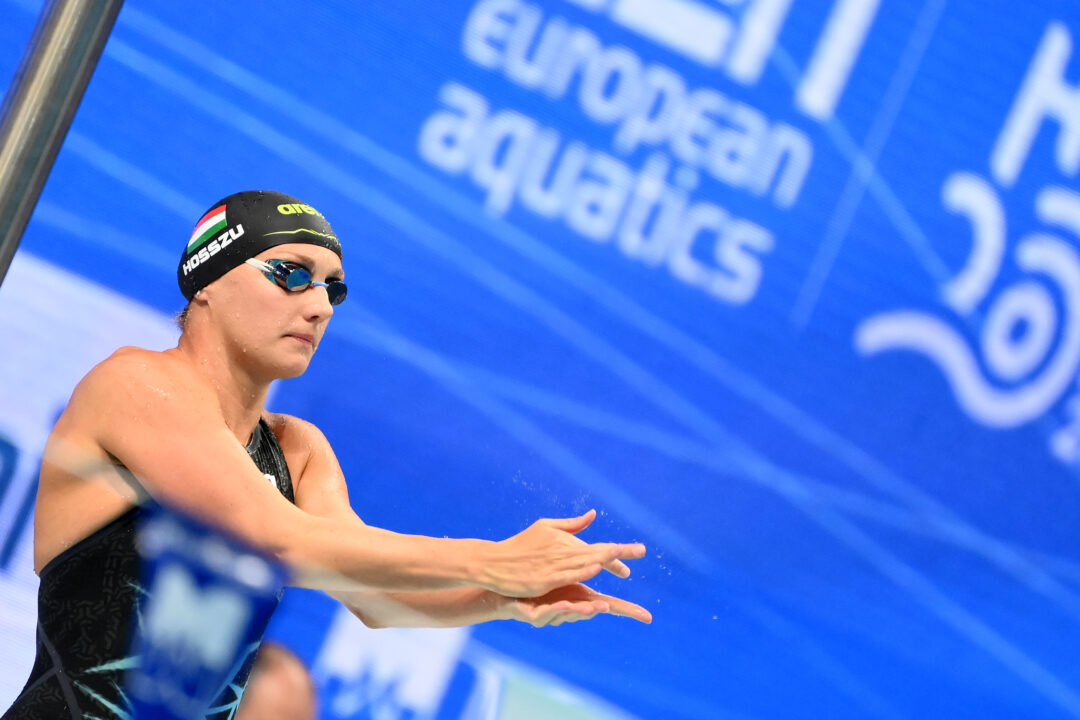 World record holder and reigning Olympic Champion Katinka Hosszu is looking to defend her title in Tokyo, but a group of rising swimmers may challenge her. Archive photo via Alfredo Falcone - LaPresse

Since the 2016 Rio Olympic Games, Katinka Hosszu has dominated the women’s 400m IM, winning every major international title in the event over the last Olympic quad. The current world record holder in the event has the top two times posted in the event since the 2016 Olympic Games with her winning performances from the 2017 and 2019 World Championships. Hosszu’s winning time of 4:29.33 from the 2017 World Championships places her over a second faster than her competition, and her world record of 4:26.36 is two seconds faster than any other woman in history. Based purely on statistics, Hosszu should be the clear winner in Tokyo, where she looks primed to top the podium.

However, there is a lingering question mark following Hosszu in the IM events. Since Rio, Hosszu has dealt with significant issues in her personal life, including a split from her husband and longtime coach Shane Tusup in 2018. In addition, Hosszu was only a 4:34.76 at the recent European Championships, over 8 seconds shy of her own world record. Plus, Hosszu has a hard schedule in Tokyo that includes the 400 IM, 200 IM, 200 backstroke, and 200 butterfly. Although the 400 IM is on the first day, she may need to conserve energy at 32-years-old.

Despite the lingering questions, Hosszu is still the favorite to take the Olympic gold, especially considering 2 out of the 4 women ranked ahead of her worldwide for the 2021 season will not be racing the event in Tokyo.

The only two women ranked ahead of Hosszu for the 2021 season who will be swimming the event in Tokyo are Americans Emma Weyant and Hali Flickinger, who posted times of 4:33.81 and 4:33.96 at the US Olympic Trials meet. Both swimmers have never contested the event at a senior-level international competition before.

Weyant rose to the scene in 2019, when she upset the field at the US Nationals meet to take the national title in the event. Her time of 4:35.47 was almost a 5 second drop at the time, and ranked her as the fastest American in the world for the 2018-2019 season. Despite this, she was still an underdog at Olympic Trials, where she roared home on the freestyle leg of the race to punch her ticket to Tokyo. Given her closing speed, Weyant is a serious medal threat, who may even challenge Hosszu if there is a small-enough window between them going into the freestyle leg.

Flickinger comes into Tokyo with some Olympic experience after racing the 200 butterfly in Rio, where she placed 7th in finals. Although she has traditionally focused on the 200 butterfly, Flickinger has shown a lot of improvement in this event, going from 4:37.55 down to 4:33.96 at Olympic Trials. Flickinger’s 4:37 was only set last April as her previous personal best of 4:38.84 was set at the 2020 Pro Swim Series in Des Moines just before the beginning of the pandemic. In addition, Flickinger trains in Arizona with Bob Bowman, who coached one of the world’s greatest 200 butterfly/400 IM swimmers for decades. Given her stamina, combined with Bowman’s knowledge of the Olympic double, Flickinger should be primed to perform in Tokyo.

Since the end of the 2016 Olympic Games, only one woman has been within a second of Hosszu in this event: Japan’s Yui Ohashi. The 2019 World Championships bronze medalist in the 400 IM, Ohashi has been as fast as 4:30.82 in the event back in 2018. Although she has only been 4:35.14 this season, Ohashi has a major advantage in the fact that the Olympics are being hosted in Japan. Unlike Hosszu, Weyant, Flickinger, or many of the other competitors, Ohashi will not have to adjust to a time difference or travel far to participate in the Games. Since the 400 IM is one of the first swimming events contested at the meet, this may ultimately prove to be what puts her on the podium.

Canadian Sydney Pickrem has been a lingering threat in the 400 IM for the past few years. In 2016, Pickrem finished 12th overall in the event, failing to make the final in Rio. However, she roared back in 2017, placing 3rd overall at the World Championships with a time of 4:32.88. Pickrem later placed 4th overall at the 2019 edition of the meet, just missing out on a medal. Over the past 4 years, Pickrem is one of the only women to beat Hosszu in an IM event at an international competition, as she took her down head-to-head in the 200 IM at the 2020 FINA Champions series.

At the 2021 European Championships, Aimee Wilmott gave Hosszu a run for her money over the first 200 meters of this event until Hosszu managed to pull away on the breaststroke leg. Ultimately, Wilmott ended up tying for a silver medal with Hosszu’s countrymate Viktoria Farkas in a time of 4:36.81. However, given her ability to hang with Hosszu, Wilmott may be able to sneak into the final, especially if she can close faster than she did at Euros.

Two other swimmers to keep an eye on are Italian Ilaria Cusinato and Frenchwoman Fantine Lesaffre, who hold personal bests of 4:34.65 and 4:34.17, respectively. Notably, the 21-year-old Cusinato previously trained under Hosszu’s old coach Tusup, but elected to leave his program at the beginning of the 2019-2020 season.

Spain’s Mireia Belmonte Garcia is another name to watch. The 2016 Olympic champion in the 200m butterfly, Belmonte Garcia has had significant international success in this event as well, winning the silver medal at the 2017 World Championships. However, health issues have hindered her performance for several years, and leave her questionable going into the Olympic Games.

Darkhorse Pick: Hosszu’s Hungarian teammate Viktoria Farkas has been a rising force in this event, claiming the silver medal at the recent European Championships. Farakas entered the 2021 season with a personal best of 4:40.65 that was set in November of 2020. Since then, she has lowered it by almost 5 seconds, down to a 4:36.81, which won her the silver medal at Euros. Given that she is only 17-years-old, Farakas may still have more in the tank to drop in Tokyo, which may push her into the final.

No question about the first two – it might be however Wilmott or Pickrem will take over the young talented Hungarian due to their experiences. The 400 IM is a very complex swimming, needs much more experiences than other swim and as both Americans are lacking major experiences in 400 IM I do not believe in their chances for any medals.

This is the weakest field in women’s events along with the 200BF and 1500FS. I’ll pick Ohashi to win over Hosszu who is past her best. I’ll say again McKeown should have entered this event given her number one world ranking of 4.32.73. The winning time won’t be much faster than this. I know four individual events is an ambitious program but she’s young so her recovery will be good and she may never be in this form ever again. It’s also relevant to point out that the heats and final of the 400IM are on different days with the final being a clear two days before the final of the 100BK.

I truly hope the Iron Lady comes through in this event! She is classy, fit, toned and a conditioned champion!!!

Slow race, the fastest swim this year not in top 100 of all time. Good luck to all the swimmers. Not a huge race for me. Hosszu to win it for nostalgia sake.

Bob Bowman has done a masterful job with Hali Flickinger for a swimmer who did not even compete in this event at the 2016 U.S. Olympic Team Trials.

Hosszu will win no question, she is in top form

not in that race she’s not.