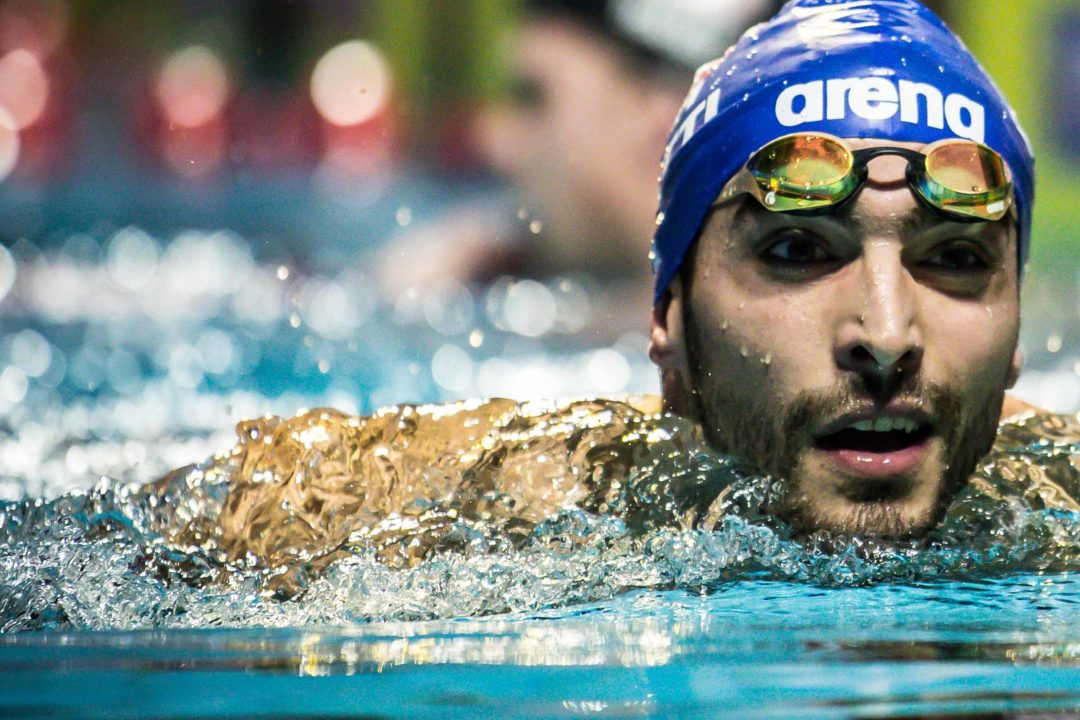 Gabriele Detti won the 2017 World title, but missed much of 2018 with injury. He returns to find a new wave of distance talent threatening his 800 free crown. Archive photo via Jack Spitser/Spitser Photography

The men’s 800 is an event exploding with potential. Prior to 2017, the event wasn’t part of the Olympic program for men, heavily minimizing its importance among the world’s top distance swimmers. The event was officially added to the 2020 Olympics, with the decision coming out about a month before the 2017 World Championships. That makes this the first long course World Championships where that addition should actually have a significant impact on the way athletes trained and how much they prioritized preparation for the 800 in their World Championships focuses.

Ukrainian Mykhailo Romanchuk has been on the forefront of the event since that announcement. He held the fastest time in the world last season, going 7:42.96 to win the European Championships. He’s carried that momentum over into this year, too. Back in April, he won a thriller of a showdown at the Stockholm Open, going 7:42.49 to top Germany’s Florian Wellbrock (7:43.03). Those two remain the fastest times in the world this year, and are faster than anyone worldwide went in the 2017-2018 season.

But it won’t be smooth sailing for gold, because the 2017 World Champ is returning with a vengeance. Gabriele Detti of Italy went 7:40.77 that year – the 8th-fastest swim of all-time in this event. Outside of the world record of 7:32.12 (recently ranked in our super-suited world records series among the toughest records to beat), no one else has ever been under 7:35. And since the ban of the super-suits, only Sun Yang of China has been sub-7:40 – he’s done it twice, in 2011 and 2015. Detti missed last year with injury issues, but went 7:43.8 in April and sits just behind Romanchuk and Wellbrock in the world rankings.

Detti’s Italian countryman Gregorio Paltrinieri is another major threat. Paltrinieri excels over the longest distances – he won every major 1500 free available to him between 2014 and 2017: 2014 Euros, 2015 Worlds, 2016 Olympics and 2017 Worlds. He’s also won Worlds silver (2015) and bronze (2017) in the 800 free, and finished second at Euros last year to Romanchuk. He’s also dealing with injury fallout: he hurt his elbow at the U.S. Open Water Nationals this spring, though he appears to be fully back from that injury.

We mentioned Wellbrock briefly above. The 21-year-old German is one of the rising young stars in distance swimming. He burst onto the scene last summer, upsetting Paltrinieri for the Euros 1500 free title and taking bronze in the 800.

The Americans have struggled in men’s distance free for awhile now – odd, considering how dominant the American women (Katie Ledecky in particular) have been in the same events. But Zane Grothe has been on a tear during this Olympic cycle. He won Pan Pacs gold last summer in 7:43.74 – the second-best time in the world behind only Romanchuk. Meanwhile Jordan Wilimovsky‘s 7:45.19 was 4th in the world, though it feels like he’d need a pretty good drop to contend for a medal. (In 2017, 7:42.44 won bronze, and the event should only likely move forwards with its new Olympic inclusion). Wilimovsky is also a top open water threat, and with this year carrying a lot of weight for Olympic open water qualification, it seems likely his focus is mostly on the marathon swimming this year, though he can still make the final here.

Norway’s Henrik Christiansen should also be in the mix for a finals spot.  He was one spot out of bronze in 2017, going 7:44.21, and last year finished in the dreaded 4th spot again at Euros in 7:46.75. He’s already been 7:45.11 this year, taking third behind Romanchuk and Wellbrock in that stellar Stockholm Open race, and ranks 4th in the world so far this season.

There will be a handful of big names either not competing or not expected to contend. Australia’s Mack Horton is the world junior record-holder in the event and won bronze at the 2015 World Championships. But he had a rough Australian selection meet and missed the qualifying times in the 200, 400 and 800 frees. He’s on the team, and it’s not clear what events he’ll contest in Gwangju. He’s dropped the 1500 from his program and has had more success in the 400 free. Horton has been 7:44.0 in his career, but hasn’t broken 7:50 since early 2016. Instead, the Australian to watch is probably Jack McLoughlin, the Commonwealth Games 1500 free champ and bronze medalist (behind the two Americans) at Pan Pacs in the 800 last year.

Meanwhile Wojciech Wojdak of Poland looked like a hotshot up-and-comer, winning 2017 Worlds silver at the age of 21 in 7:41.73. But he fell off hard last year, going only 7:56.8 and missing the Euros final by six spots. He hasn’t been any faster than 7:55.1 this year, and unless he’s holding out for an absolutely monster taper, he’s probably not a finalist this year.

Others looking intriguing this year: France’s David Aubry went 7:46.3 back in April. Austria’s Felix Auboeck is a fast-riser who won the mile in short course yards at the NCAA Championships. Anton Ipsen of Denmark is another former NCAA standout who has been 7:49 already this year. Sweden’s Victor Johansson was sub-7:50 last year and so has Jan Micka out of the Czech Republic.

Over/Under for this WR being broken by 2032

Costa was sick at Brazil trophy and almost missed world, his coach expected a sub 7:50 and 14:50 there.

Are there any psych sheets for these championships yet?

Totally agee with the medal prediction.

Not sure if he’ll swim the 800 at Worlds, but I would hope to see Jervis make the final if he is to break the 1500 NR this summer as hoped. His 1500 at nationals was really impressive; 14.46 a full 50-60 metres ahead of 2nd was really impressive. He was 7.53 at halfway there and looked very smooth so he should be capable of going well under 7.50.

Agree with the medallists, Detti just has too much speed for Romanchuk and Wellbrock. Interesting that Grothe’s season-best is 5 seconds slower than that of all other athletes but he is still “expected” to finish 5th …

His 2018 best was also second in the world, and unlike everyone else on the list, he hasn’t had any sort of qualifying meet to rest for yet this year.

If Sun thinks he won’t medal I think he’ll just shut it down rather than swim for a minor placing.