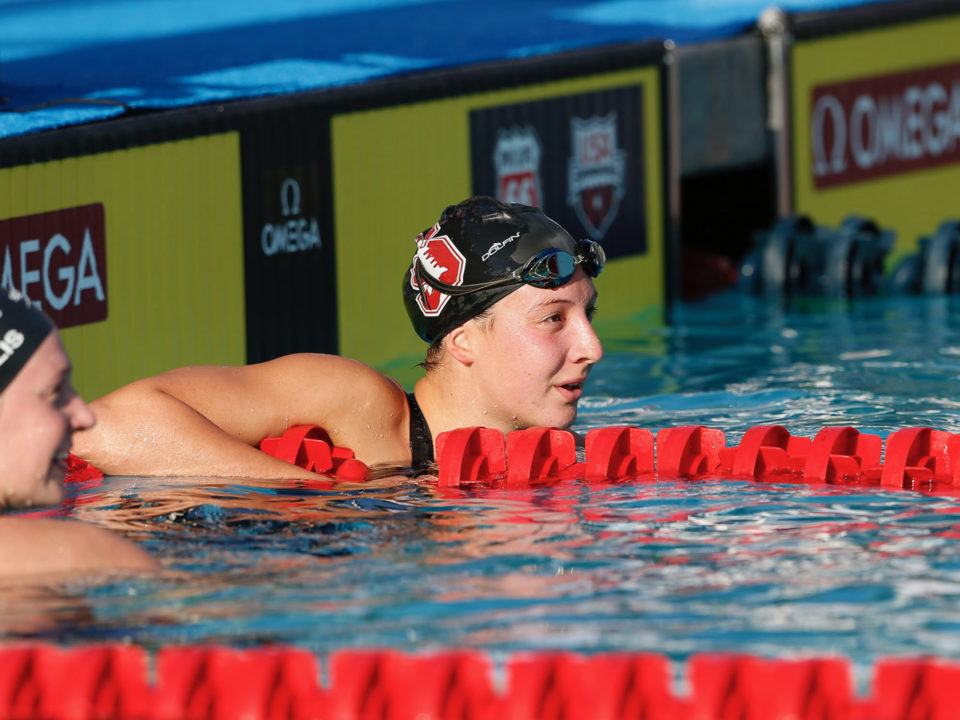 With Olympic champions Katie Ledecky and Simone Manuel moving on to the pros, Stanford reloads in search of their third-straight 800 free relay title - and they've still got the stars to do it. Archive photo via Tim Binning/TheSwimPictures.com

With Olympic champions Katie Ledecky and Simone Manuel moving on to the pros, Stanford reloads in search of their third-straight 800 free relay title – and they’ve still got the stars to do it.

A team of all underclassmen won the NCAA title last year, with Ledecky the only non-returner. Stanford set NCAA and American records at Pac-12s, using Manuel on the relay as well. But Katie Drabot, Ella Eastin and Brooke Forde return, and Stanford has the luxury of slotting in perhaps the only swimmer capable of replacing Ledecky: Canadian international standout Taylor Ruck.

Last year, Drabot led off in 1:42.9 and Eastin split 1:41.1. Eastin has looked great this season and split 1:42 at Pac-12s, but Drabot is a little less certain. She’s only been 1:44.9 this year and was a full second faster at Pac-12s last year. Forde was 1:42.9 last year but has already been 1:41.7 this season in what looks like a breakout for the versatile sophomore. Meanwhile Ruck led off in 1:42.80 at Pac-12s and has potential to go 1:40-point or better at NCAAs, with a good taper. Assuming Drabot is on, Stanford should run away with this one. On the other hand, the 800 free relay leads off the meet, so if Drabot is off for whatever reason, Stanford doesn’t have the luxury of seeing her swim before deciding if she stays on this relay. If they drop Drabot, Stanford has the enviable choice between 1:43.5 Lauren Pitzer and 1:44.2 Morgan Tankersley.

The battle for second could be very tight. Cal comes in with the top seed time at 6:50.63 – they beat Stanford at Pac-12s. The big splits were 1:41.5 from Amy Bilquist and 1:41.2 from Katie McLaughlin. But the big boost to the relay is the early addition of Izzy Ivey, originally projected as a recruit for next year. Ivey arrived early and led off in 1:44.7 at Pac-12s. Her best time is 1:43.6, but Ivey hasn’t approached that time since 2017, so expecting a 1:43 might be too much. Cal could use 1:41.9 Abbey Weitzeil… but probably benefits more from having her on the other three relays. Cal gets a fun strategic choice: use Weitzeil and go after Stanford, hoping Drabot is off, or play it safe, use Ivey and Robin Neumann and shoot for second.

That said, they’ll have their hands full with Tennessee, 4th last year. The Vols return all four legs, including star Erika Brown,who led off in 1:42.3 last year but has already split 1:40.6 this season. Tennessee returns a 1:42 from Meghan Small, but struggled in the middle two legs at SECs. Tess Cieplucha was 1:44.1 last year and 1:44.6 at SECs this year; Stanzi Moseley was 1:43.1 last year but just 1:46.4 at SECs. There’s a lot of variance there, but if all four legs can be 1:43-or-better, Tennessee could beat out even a pretty loaded Cal lineup.

Those three are the class of the field, but there’s some field depth after that.

Michigan was second last year and only graduated anchor Gabby DeLoof. Sibling Catie DeLoof was already 1:42.3 at Big Tens, a big improvement from her 1:43.3 leadoff at NCAAs last year, and Siobhan Haughey will be 1:40 or 1:39 on her leg. Rose Bi is a little too distance-oriented to really crush a 200, but should hold down the fort in the 1:43-1:44 range. The fourth swimmer will be Michigan’s big hurdle: Becca Postoll was just 1:46.1 at Big Tens.

SEC champs Texas A&M should be tough, with likely 1:42s from Sydney Pickrem and Claire Rasmus. The Aggies probably won’t have anyone go 1:40-point, but have the depth to keep every leg under 1:44. Then there’s the other team from Texas: those Longhorns. They’ve really stood out in the 400 free relay this year, but project pretty well in the 800 as well. Claire Adams split 1:41.7 last year and three of the four legs return after a 5th-place finish. In addition, Joanna Evans has stepped up, going 1:43.9 individually this year. Sneaky strategy to watch for: freshman Julia Cook is a standout sprint freestyler/backstroker. But she was 1:44.2 out of high school. She’s only swum the event once this year and might be of more use on the other four relays. But if Texas feels they are one swimmer away from a top 4 finish here, Cook could be a high-upside choice.

And keep an eye on Virginia. They were 7th last year and return three of the four legs. Morgan Hill was 1:44.1 last year but already led off in 1:43.2 at ACCs this year. Their one graduated leg was filled by sophomore Paige Madden, who split a team-best 1:42.8 at ACCs.

USC will be in the hunt if they choose to use Louise Hansson on this relay. Doing so would spread out her events more, and Hansson figures to get near the max of 11 swims over the four-day meet. She’s probably at least a 1:41/1:42 leadoff, and the Trojans have two more 1:43-or-better legs from Pac-12s. Finding the fourth swimmer could be a challenge though; USC got a 1:45.0 on their anchor leg at Pac-12s and a pair of 1:45s are what sunk them to 13th last year desite Hansson’s big leadoff.

Minnesota has a stellar duo in Chantal Nack (1:43.1 at Big Tens) and Mackenzie Padington (split 1:43.2 last year), but will also have to scrape to get two more legs under 1:45 if they want a top 8 spot. Kentucky looks pretty deep, with potential 1:42s from Asia Seidt and Geena Freriks and no splits over 1:44.9 at SECs. Georgia was 10th last year, but graduated two key legs.Their duo of butterfly freshmen Olivia Carter and Dakota Luther need to average 1:44.5s or better to take full advantage of great splits from Veronica Burchill and Courtney Harnish.

Louisville might have the best individual in the field: Mallory Comerford, who split 1:39.1 last year. At ACCs, though, they struggled with depth and didn’t have another split under 1:45. They’ve got two returners who were 1:44-mid at NCAAs last year. If they could get three more legs in the 1:44-lows, they’re probably in the top 8. If the other three average closer to 1:44-high, they’re probably on the bubble or out.

Speaking of Stanford, there’s been no mention yet of their 4 divers that have qualified for the meet. This is definitely noteworthy because it will require them to now leave 2 invited swimmers at home (assuming they take 3 or more divers)! Max of 18 athletes are allowed per team (divers count as 0.5) and they have 18 swimmers & 4 divers qualified, which means that 2 swimmers or 1 swimmer/2 divers will have to stay home. This could affect their relays?! Amalie Fackenthal is not seeded in scoring range in her individual events, but was on 4 of their relays at PAC-12s (all except 800 free). Any update on the scratches from the psych sheet yet?

Sorry, I meant “no mention” of how this affects their squad due to the roster limits… as in, who is being pulled from the meet?

Pac-12s generally seem to be a pretty poor indicator of how teams will perform at NCAAs. Moreso than maybe any other conference meet, most of the top teams at Pac-12s seem to be hit or miss with who is rested and how much, plus swimming different relay lineups or off-events for those already qualified to NCAAs.

Even though Cal won at Pac-12s, I think the combo of Eastin/Ruck is better-suited to the 200 than McLaughlin/Bilquist. And I think Forde/Drabot (both 1:42s at NCAAs last year) are also probably better than Ivey/Neumann, especially considering Ivey didn’t have a full year training at Cal and hasn’t been better than 1:44.4 since 2016.

Stanford the faves, yes– Meehan loves to sneak attack the tapers. I’m really excited to see what Taylor Ruck can do. Comerford will be hungry as hell to break Missy’s legendary 200 free record but I wonder if Ruck can push her to low 1:39? Cal is going to push Stanford in the relay. If Ivey and Neumann can keep it pretty close to Stanford, watch out for McLaughlin and Bilquist. They are going to be ferocious!

Any chance Stanford leaves Ruck off this relay in favor of the other 4! Her low 21s and 46s make her critical to the other relays with the loss of Hu and Howe!

We shall see-six days to go!

Them Porcupined Capped She-Vols is being very tough in this event….I says they will definitely finish in the top 6!

why are these comments always so extra…

I think we’re all watching Googoodoll slowly descend into madness. NCAA season does weird things to us all!