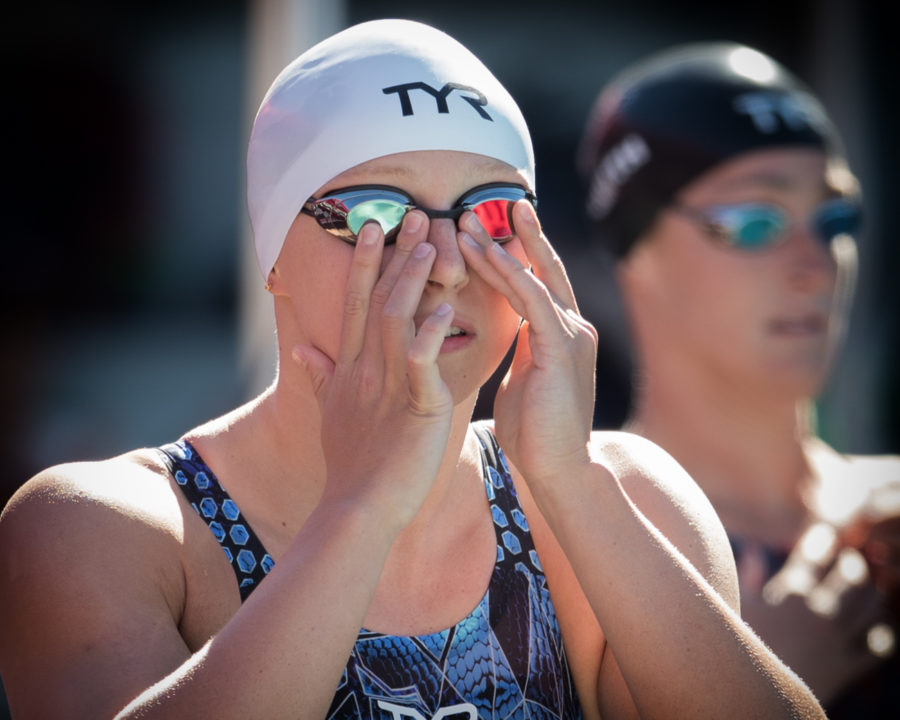 Katie Ledecky has opted out of the women's 200 IM on Thursday at 2019 U.S. Open. The event follows the 400 free where she is seeded 1st. Archive photo via “Rafael/Domeyko Photography”

Among the championship-seeded heats, there are a number of scratches. Canada’s Emily Overholt (#5 seed) and Hali Flickinger of Sun Devil Swimming (#13) are out of the women’s 400 free. Flickinger has also given up the 9th-seeded spot in the 200 IM, whereas Overholt is still planning to swim in the 200 IM where she is seeded 11th.

Katie Ledecky from Nation’s Capital Swim Club (20th) and Gretchen Walsh of Nashville Aquatic Club (31st) have scratched the 200 IM, as well. Ledecky is seeded first in the 400 free. Walsh is 2nd in the 50 free after the withdrawal of Anna Hopkin, who is representing Great Britain at LEN European Short Course Championships. Also absent from the 50 free will be California Aquatics’ Katie McLaughlin (#21), Claire Curzan of Tac Titans (#28), and Karen Torrez (#27).

The only scratch from the circle-seeded heats in the men’s events is Gunnar Bentz of Dynamo Swim Club, who had been seeded 17th in the 200 IM.

Katie Ledecky hasn’t been interesting since 2016

I’m very disappointed of you. After being so much for so long obsessed with YOZHIK you still cannot recognize him.
What does DB in your name stand for? Is it a medical term?

It’s just kind of boring seeing her 10secs of all her best times and not really seeming to do anything with the 100free and 400IM anymore.

Those are just accomplishments she’s already done before 2016, also her 1500 world record would prob be faster if she had been able to swim it in Rio.

I’d like to see you say it to her face.

There is a difference between voicing my opinion on an online comment page solely meant for voicing opinions than the rudeness of me criticizing her in person if she took time out of her busy day to talk to me. I’m sure you would not be making piano jokes to Tom shields or joe schooling’s face. If u can’t understand the difference between an online message board and a real life conversation, I can’t help u.

Seriously, what else would a 50FREE say about a distance swimmer? Can’t wait to hear 1500FREE’s trash talking comeback.

Katie would indeed be much more exciting if she dropped a 24low in the 50.

@50FREE:
Yes, 2016 was annus mirabilis: 52.6 (split), 1:53.7, 3:56. 8:04. Immediately after that she said that these personal bests are too tough to repeat. And I’m sure you won’t see in your life anybody of such versatility at such level.
Well, is it a reason of not being interested of watching this unique swimmer who added to the incredible gift of speed and endurance the longevity of being top swimmer. 7 years already. Sure someone can get tired of that. I just don’t see the reason to make this exclusively personal feeling public. You can say same about Sarah Sjostrom after her incredible 2017. Say it please. Be consistent.

Oh ya I Sarah swimming the 100fly is kind of boring now. I wouldn’t care to watch joe schooling swim. This was just an article with the headline of Katie loosing another chance to branch out.

In all seriousness, I have nothing to put down Shields at all. He’s a great guy, sometimes we get carried away with the memes over here, but at the end of the day there’s nothing wrong with plateauing.

Is that an STD?

Is Ledecky training at Nations Capital and not Stanford’s pro group? This has been confusing me for awhile. Seems like a lot of the post grads have had their club from their age group days listed at a lot of these meets.

Yes, a lot of pros do this. I could be wrong but I believe cody miller said in one of his vlogs that Sandpipers of Nevada stills sponsors him and that is why he represents them, rather than Indiana, where he trains.

Katie is still in school at Stanford.

Many of the athletes “owe” their home club for helping them with their start. These are USA Swimming meets for USA clubs, and there are restrictions on university/club naming. You see it all over. These big meets are also big points for clubs going for the Gold, Silver and Bronze level status. I enjoy seeing the athletes represent the clubs that helped them get their start.