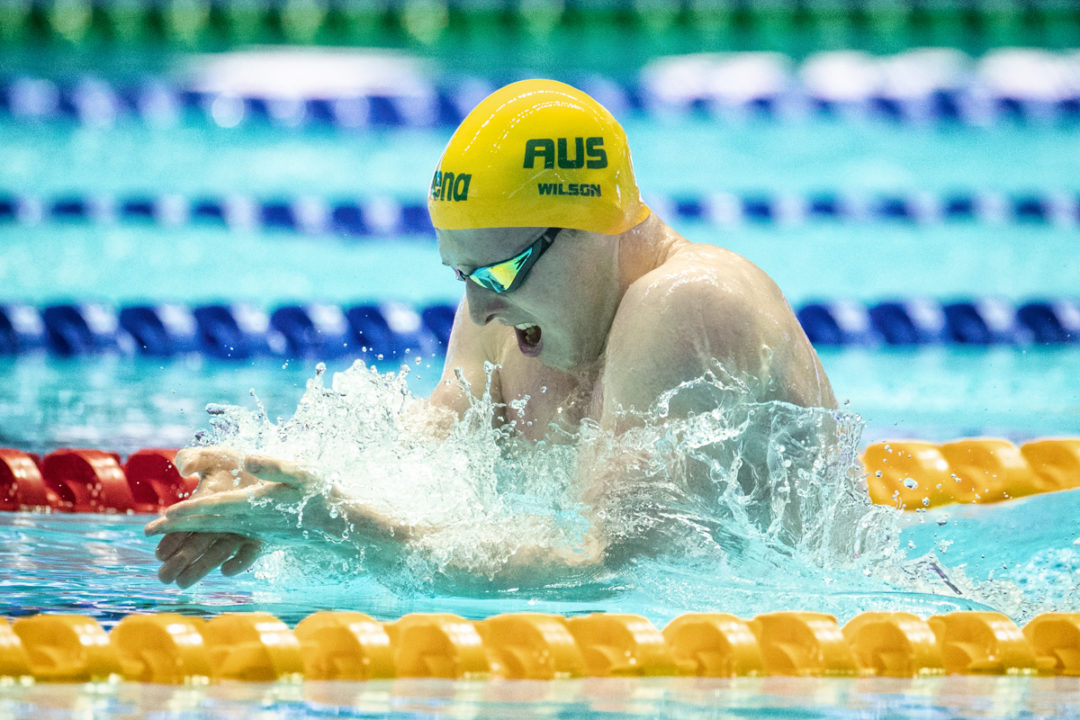 No one knew Matthew Wilson's name until this year when he tied the then-200 breast world record before earning a Worlds silver medal. Stock photo via Rafael Domeyko

In 2019, Wilson emerged into the spotlight when he broke countryman Christian Sprenger‘s super-suit era 200 breast Oceanian/Australian record with a 2:07.16 at the Australian National Championships in April.

That swim earned him a spot on the 2019 World Championship team, where during the 200 breast semi-finals, he tied Ippei Watanabe‘s 2016 world record of 2:06.67, once again re-slating himself in Australian history and world history. The event final featured the 3 fastest performers in history, including Wilson, Watanabe, and Russian Anton Chupkov. While Chupkov wound up winning the event and breaking Wilson/Watanabe’s world record, Wilson almost matched his time from the semis (missing by .01) and wound up with a silver medal.

Wilson was also a member of the winning mixed 400 medley relay alongside country-mates Mitch Larkin, Emma McKeon, and Cate Campbell. During the relay, Wilson split a 58.37.

For the inaugural ISL season, Wilson joined many of his fellow Aussies to the London Roar, where he was a key relay member and event scorer. While the London Roar finished second in the league finale, Wilson did finish his debut season with one individual event win (200 breast) under his belt.

Wilson is now the second breaststroker to win this Swammy after Christian Sprenger won the inaugural award in 2013.

Why is it so hard to find a video of that 200 breast at worlds?

I would also love to re watch the 4 x 200 free gold. Impossible to find.

Best race of the meet. So many lead changes.

All the world championship session replays can be found here: https://storage.googleapis.com/static-production.netcosports.com/temp/sal_live_upd3.html

Thanks. Just re watched.

Was Sullivan in a superuser?