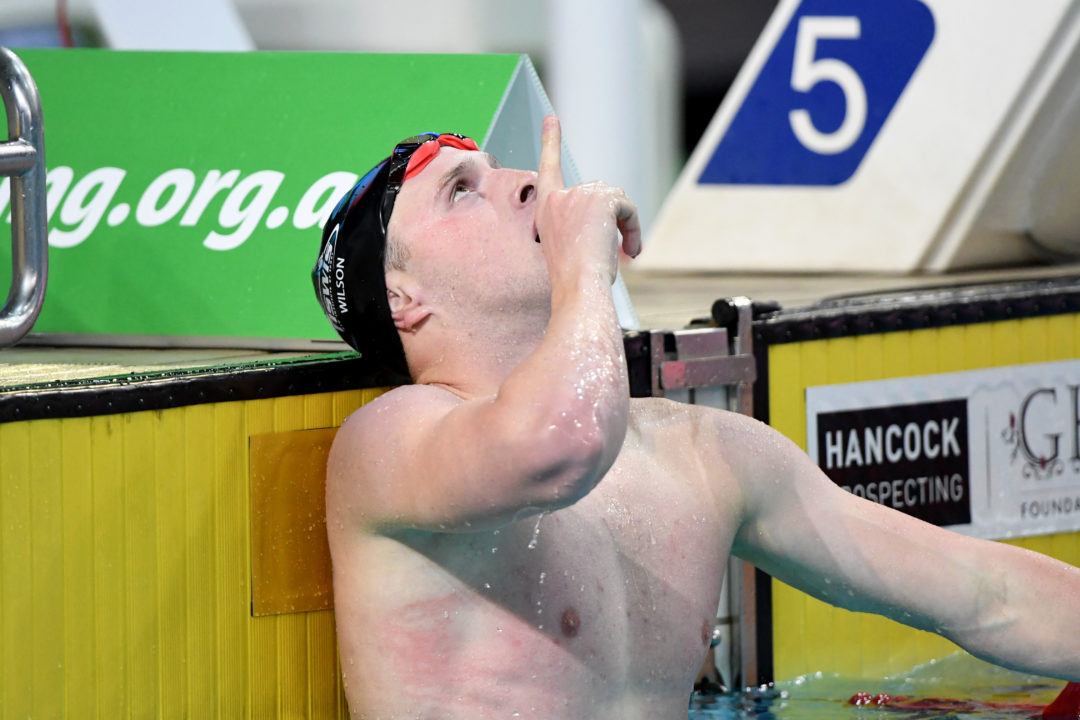 20-year-old Matthew Wilson threw down the swim of his life on day 2 of the 2019 Australian National Championships. Archive photo via Delly Carr / Swimming Australia Ltd

20-year-old Matthew Wilson threw down the swim of his life on day 2 of the 2019 Australian National Championships. The SOPAC athlete powered his way to the top of the podium in the men’s 200m breaststroke, clocking a monster effort of 2:07.16 to produce a new Australian National Record and Commonwealth Record.

Wilson staked his claim on the men’s 200m breast this morning with a 2:10.52 solid swim out of the heats. But, the Pan Pacs bronze medalist had designs on busting out a big swim by taking his final out tonight under World Record pace. Splitting 1:00.94/1:06.22, Wilson produced his fastest time ever, obliterating his previous career-fastest of 2:08.22 from Pan Pacs.

His 2:07.16 time tonight also overtakes the supersuited record of Christian Sprenger, who held the Aussie NR  of 2:07.31 since the 2009 World Championships in Rome. Scottish Olympian Ross Murdoch held the Commonwealth Record with the 2:07.30 from the 2014 Commonwealth Games.

Just last month Wilson hit a big-time mark of 2:08.56 to absolutely manhandle the men’s 200m breaststroke field at the NSW Championships. At the time, his sub-2:09 effort checked in as the 3rd fastest time in the world.

Wilson’s 2:07.16 now checks the man in as the 2nd fastest in the world, sitting only behind reigning world reocrd holder Ippei Watnaabe of Japan who produced a 2:07.02 just yesterday at the Japan Swimming Championships.

He is now the 4th fastest performer of all-time in the event, with only the men below ahead of him.

By the way I wonder why george Harley is not swimming in this meet?? He was a promising a 2:10s swimmer last year .. would have been good to see his progress

Already in-season (and also in the Ims) Matthew Wilson sent good signals .
Now he’s just 49 hundredths shy the 200 breastroke WR, at just 20, so a serious contender for the medals at Worlds.

So happy Wilson has been able to crack the 2:08a barrier as I’m sure it would have been challenging and motivating him to see local rival zac stubbtelty cook get below 2:08 before him .. by the way how did zac swim??