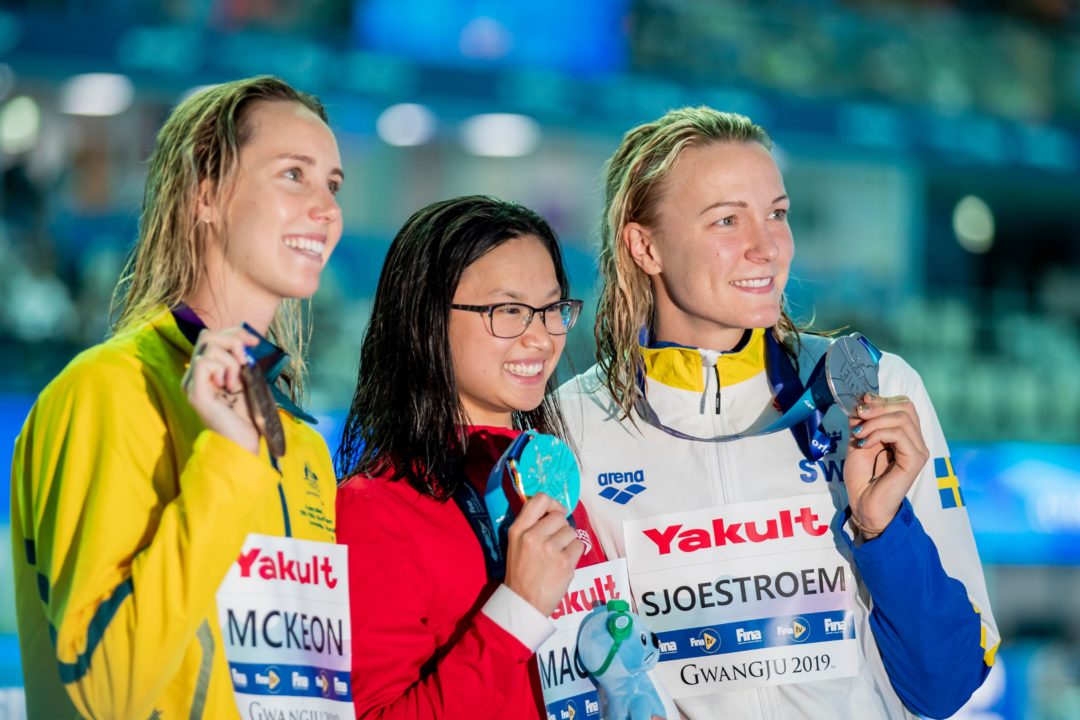 Not a single entry chose Maggie McNeil (above, red outfit) to win the women's 100 fly, while every entry chose Adam Peaty to win the men's 100 breaststroke. Current photo via Swimming Canada/Ian MacNicol

In the women’s 100 fly, not a single entry had Canadian 19-year old Maggie MacNeil winning the women’s 100 fly over the World Record holder Sarah Sjostrom. 6 people chose Australian Emma McKeon to win, 14 chose American Kelsi Dahlia to win, but not one picked MacNeil to come out on top, and she did so by nearly four-tenths of a second. 9 entries out of over 500 did have her 2nd, so mild bragging rights for you.

Then came the most predictable outcome of the first 2 days of racing: Great Britain’s Adam Peaty to win the 100 breaststroke. He didn’t break his World Record of 56.88 from day 1’s semifinals, but even at 57.14 he was untouchable in that race. Every entry that chose a winner for the men’s 100 breaststroke chose Peaty – though a handful did leave their picks blank.

40% of selectors successfully chose the historic British 1-2 in the race.

Katinka Hosszu was also a relatively-heavy favorite in her win in the women’s 200 IM, while Caeleb Dressel did surprise most of the entrants – although he is a commanding favorite in each of his other 3 individual races (50 free, 100 free, 100 fly). He didn’t medal in the 50 fly at the 2017 World Championships, where he was otherwise electric, so that’s probably what drove most of the skepticism about this race specifically, in addition to seeding

The winner of day 2’s prizes is Pandacatswim, who scored a whopping 49 points – far more than anybody else entered. That also pulled Pandacatswim into a tie for the overall lead with “Ask me about 100%,” who had a big first day. Ous is King, the day 1 leader, was ranked only 430th on  day 2, but is still very much ‘in the hunt’ for the overall title: currently in 13th place.

hmmmm refusing to pick sun for anything probably isn’t helping me out to much. (Will they go back and redo the pick up when his results are nullified in September 😉 )

If my math is correct, Swimswam Preview Index would’ve scored 27 points in the contest in Day 2, 42 yesterday. 69 points so far these two days.

Tough to succeed as an American when your blind patriotism guides your picks.

4th and I’m doping, yikes I need some stronger stuff.

Sadly Marty McFly is too busy to give you the results

Reminds me of Swimsquads: the first round everyone did well but the second one was low on points.

So does anyone else go through a cycle of finishing a day of finals, saying to yourself: “Hmmm I think I had quite a few of those picks dead on today, I bet I scored pretty well in the Pick’em”, and then realizing you’re ranked even lower than you were yesterday / last year?

I picked Dahlia to win and Sojostrom second, kinda disappointed that didn’t happen but I’m so happy for MacNeil.

Dahlia almost had second but she died more than Sarah