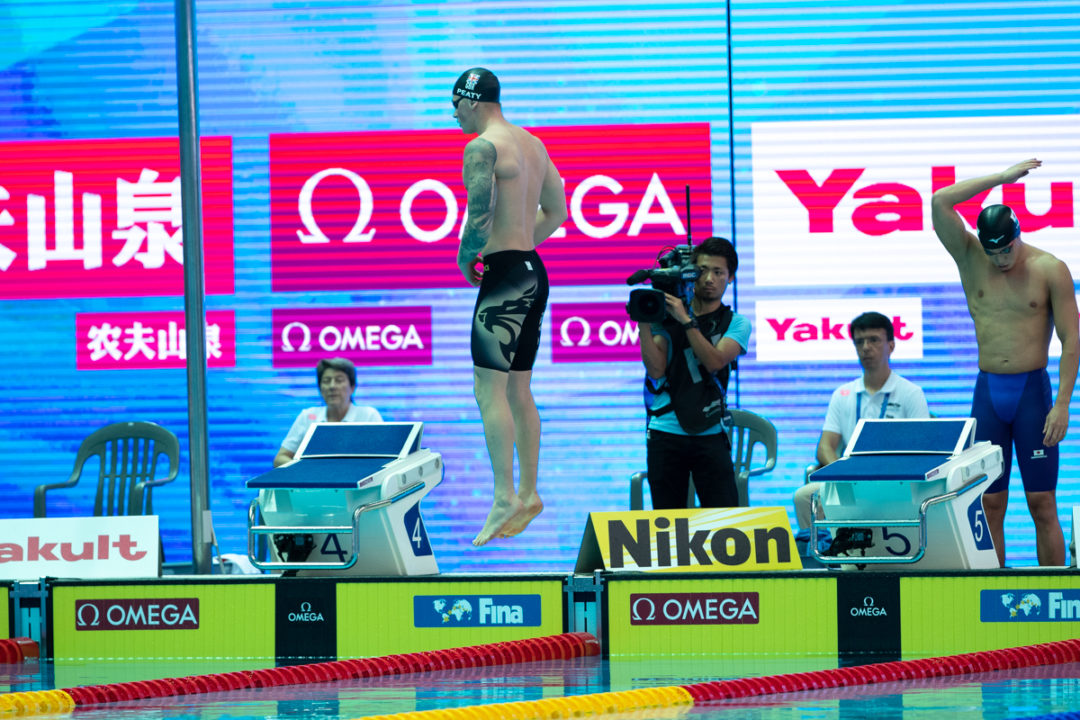 Swim enthusiasts around the world were floored yesterday when we saw British breaststroker Adam Peaty put up the world’s first sub-57 100m breaststroke. The 24-year-old Loughborough swimmer was already the only swimmer in the world to have ever ventured under the 58-second barrier, holding a World Record of 57.10 from last year’s British Championships.

During last night’s semi-finals, the Olympic Champion rocked a time of 56.88 to beat the field of national champions and Olympic finalists by almost 2 full seconds. His compatriot James Wilby wasn’t too far behind, securing the 3rd seed behind newly-minted Asian Record holder Yan Zibei of China, who snagged the 2nd seed in 58.67.

In tonight’s final, Peaty was up to his usual tricks with a massive 57.14, off his 56.88, but still, just .04 over his previous World Record, rendering him at the wall a good second and then some over the rest of the competitors.

But, Wilby produced a personal best of 58.46, taking nearly .2 off of his previous lifetime fastest of 58.64 to land on the podium with silver. Zibei clocked 58.63 for bronze, lowering his Asian Record by another .04.

Of significance is the fact that Peaty and Wilby represent the first British duo ever to finish 1 & 2 at a World Championships. Some pairs have come close in the past, such as David Wilkie and David Leigh finishing 1st and 3rd in the 100m breast back in 1975, or Joanne Jackson and Rebecca Adlington finishing 2 & 3 in 2009 in the 400m free.

Even more recently, Peaty and Ross Murdoch took home gold and bronze in the 100m breast at the 2015 edition of the World Championships in Kazan.

However, Peaty and Wilby broke through with the top 2 medal positions tonight, to write their names into history and set-up a solid foundation heading into the final year to the Tokyo Olympics next year.

“This is still very special to me, winning a World Championship title and faster than I’ve ever done it before. It’s obviously a little bit slower than last night as I made a tiny little error with speed on the first 50, but I think the most important thing going into next year is that I’m still learning about myself; it’s not like I’ve gone 56 and I’ve got no more learning to do. I’m ecstatic to come away with a world title.

On his swim, Peaty stated, “I’m very happy, but that constant expectation I put on myself there is a little bit of disappointment in me, but I think that’ll fuel me for next year as I want to go even faster now – for now though, I’ll enjoy the moment.”

When specifically asked about his finishing with Wilby right behind, Peaty said,“It’s not just a British one-two but a Loughborough one-two! We’re training partners, well he trains in a different group, but we train in the same centre, and I’m stoked for him. It’s looking like Britain is a stronghold for breaststroke and it has been for a long time now.”

For Wilby’s part, the Commonwealth Games champion the 200m breast said, “I’m really happy. After the Commonwealths and Europeans last year this was always the next major international and the one last stepping stone towards Tokyo, so I’m really happy to get that silver medal and a Britain one-two means an awful lot to us as well. I’m buzzing for the 200 as well, because I focus on them both and that 100 makes me excited to see what I can do in the 200 now.

“After the World Championships in 2017, which was a bit of a shock for me as I wasn’t quite fully prepared for it mentally, I sat myself down and thought ‘right, I’m not going to be in this game forever, so it’s time to go’. I just really got myself motivated and have been keeping it going ever since and constantly learning.

“It’s hard to describe the setup we’ve got in Loughborough with an amazing group of staff. It’s individual races, but it’s a team effort at the same time, as I couldn’t do a single thing without any of them behind me doing their various things.”

Adam Peaty was seen levitating before going 56 in the 100m breast. Photo evidence.

Hoping for more success from Scott tomorrow night. But that 200 free could go anywhere. I don’t see Lewis winning it I think he just went for it in the outer lane and didn’t know he was going that quick. Megli, Matsumoto, Malyutin and maybe Kozma aren’t realistic contenders. I think medals will go to Sun, Lewis and Scott(in no particular order)

I gotta disagree with you there on Megli, Matsumoto, Malyutin & Kozman not being realistic contenders. When the entire world-class field, minus Lewis, is only separated by less than half a second anything is possible.

I know. That’s just what I’m predicting for now. The field is so stacked that by tomorrow those predictions will probably have changed.

That is cracking me up.

The 4×100 Free relay doesn’t even have a branding name.

Gosh, HUN would be dangerous, yeah?

Batle for Minor Medal would actually be fun.. many countries with 4 sub minute guys..

My gut would be: GBR a long way clear. USA, Russia, Brazil battling? Would be fun to watch stroke 4x100s, particularly a 4×1 back 😂👀

GBR team will be celebrating while the others are still under the flags.. (2018/2019 add up times If Fina Ranking is 100% correct)

Nice Picture of Peaty – the guy must have a solid vertical extension as well .