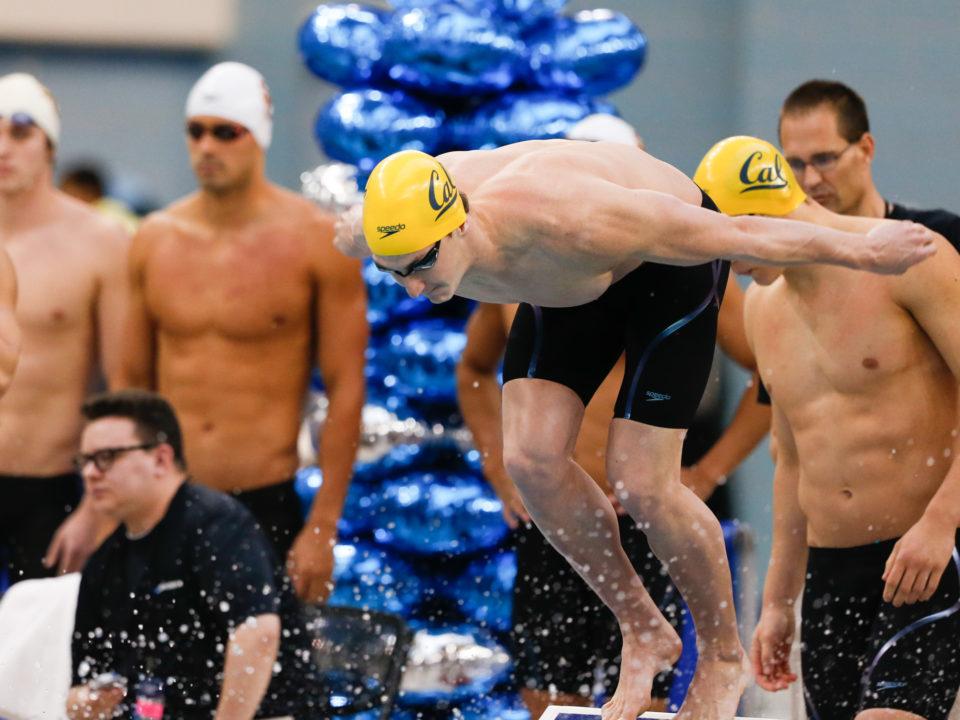 With no Caeleb Dressel setting the pace, the early lead (and resulting clean water) is up for grabs in the 200 free relay. Archive photo via Tim Binning/TheSwimPictures.com

The lesson from last year’s 200 free relay: the value of a great leadoff leg. Swimming in clean water, ahead of the chop of the other teams, allowed Florida to win the national title with two sprinters, a butterflyer, and an IMer. Well, having a 17.8 leadoff leg didn’t hurt, either.

We don’t imagine anyone will be leading off in 17 this year, but the battle for clean water early could be the deciding factor in a race that could break a number of ways. One national trend is that teams seemed more willing to put their best swimmers later in their relays in the conference rounds – but NCAA history suggests that in the brutal NCAA field, most teams will shuffle their orders to get their fastest swimmer towards the beginning.

Florida graduated all four of its legs, leaving NC State as the fastest school returning at least part of its 2018 relay. Three of four Wolfpack legs return, and freshman Nyls Korstanje has jumped right into action. The driving factor last year (besides an 18.5 leadoff from graduated Ryan Held) was Justin Ress‘s 18.3 split on the second leg, as NC State front-loaded its relay order. They took an opposite approach at ACCs, leading off with Korstanje in 19.3, but it seems likely Ress (19.1 this year) will shoot for an 18-second leadoff at NCAAs. Jacob Molacek was 18.6 last year – he was noticeably off at ACCs, but should be closer to his best by next week. Coleman Stewart went 18.9 on the anchor leg last year, and it’s likely Korstanje can break 19 from a flying start as well.

Cal returns three of their four legs. Pawel Sendyk (18.5), Ryan Hoffer (18.3) and Michael Jensen (18.5) were all great on this relay a year ago, and looked good at Pac-12s. The question is the fourth leg. Cal used Zheng Quah at Pac-12s, but his 19.4 from a flying start would sink this relay at nationals. The two more-likely options: Nate Biondi (who was 19.4 in a Pac-12 time trial) or Andrew Seliskar, who went 19.8 as a high schooler four years ago. He split 18.8 at mid-season, so Biondi would be pretty hard-pressed to better that split. On the other hand, Seliskar is a lock on the other two free relays, and might figure to swim the 400 medley as a butterflyer. Putting the relay puzzle pieces together is one of the harder parts of these previews. My two cents are that Cal can probably handle the 200 medley without Seliskar – Carr/Whitley/Sendyk/Hoffer are good enough to score big, and the more 200-based Seliskar doesn’t seem like that much of an upgrade over Whitley or Sendyk in a 50. Using Seliskar in the 200 free relay seems like a pretty high-upside choice for a relay that is one leg away from NCAA title contention.

Texas graduated half of its relay, but brings in an outstanding class of freshman freestylers. Tate Jackson should be a lock on this relay, assuming he’s healthy. He was 18.7 leading off at mid-season. John Shebat returns, and a season of being healthy should allow him to improve in his 18.7 split from an injury-addled 2018 season. At mid-season, Texas swam Townley Haas (19.0) and Luke Bowman (19.3) here, but Bowman didn’t make the NCAA roster. The choice is probably between Haas and freshmen Drew Kibler (19.3 mid-season individually) and Daniel Krueger (19.4 at Big 12s), with hopes for an 18.8-or-so split. Haas is maybe the safest bet, but also has the 500 free directly after this relay.

Alabama tore it up at SECs, and return the better half of a relay that got 10th last year. Robert Howard is a potential 18-second leadoff, with Zane Waddell good for an 18-mid split. (Though with Robert Howard splitting 18.1 on the anchor leg at SECs, it’s tempting to keep him there and hope he becomes just the third man ever to break 18 on a relay split.) Sophomores Sam Disette (18.9 at SECs) and Jack Blake (19.0) will have to at least hold their times from SECs, but this Alabama relay could finish top 4. They’re currently the top seed, and their SEC time would’ve been 5th at NCAAs last year.

Indiana won the B final last year. They graduate 18.8 split Blake Pieroni, but brought in transfer Zach Apple, who led off Auburn in 18.8 last year. A top pick to win the 50 free, Apple could put IU into the lead early, though he hasn’t looked great in-season in his new training environment. IU got straight 18s at Big Tens, though all three were between 18.88 and 18.93. That’s kind of the formula Florida used last year though – a big leadoff followed by three consistent splits.

Florida State comes in with the #2 seed behind Alabama. They even beat NC State at ACCs, getting an 18.5 anchor from Kanoa Kaleoaloha. If Will Pisani can lead off in 19-low or 18-high (he went 19.17 at ACCs), this team should be hard to catch – they don’t have any unbeatable legs, but they really don’t have a weak spot, either. Senior Emir Muratovic is new to this relay from last year, but went 18.8 at ACCs. Freshman Jakub Ksiazek was only 19.1 at ACCs, but also went 19.4 individually (faster than Muratovic), so he’s got a great chance to break 19 seconds.

The SEC is pretty loaded with relays that could crack the top 8. Florida has a shot to do so with an entirely new lineup. Freshman Will Davis blasted an 18.6 split at SECs. You know what Dressel split on this relay as a freshman at ACCs? 18.5. Just sayin’. They’ll need to adjust their order, though, and maybe get Davis on the leadoff leg. Tennessee has 18.9 leadoff man Kyle Decoursey in the mix and return three of four legs from last year. New addition Joey Reilman split 19.0 at SECs, too. Missouri saw Mikel Schreuders split 18.7 at conference, and freshman Danny Kovac was 19.1. Meanwhile Texas A&M has two 19.3/19.4 individuals, but only got a 19.6 leadoff from Shaine Casas at SECs. They probably need Mike Thibert on the leadoff leg with 18-second splits from Adam Koster and Casas to have a shot at the A final.

Another team with big potential that just needs to figure out a leadoff leg is Ohio State. Ruslan Gaziev split 18.8 and Mossimo Chavez 18.7 at Big Tens. Moving Gaziev to lead off could give them straight-18 splits on the final three legs.

I would say he is more than capable of an 18 mid split.

This is true. On the other hand, his sprint freestyle times haven’t improved since that freshman season, although his backstroke has improved significantly. 18-low is probably the ceiling for Waddell, 18-mid more of an expected outcome. He was only 18.7 last year.

Discrimination is not nice. Truth is truth. NCState for the win and is this the year DeCoursey can lead the HEMEN-Vols into the top 8 onhtis relay AND in the TEAM RACE.

How do you see the bulldogs doing in this relay?

Da dawgs might be able to squeeze into the b final if they can show up strong, woof woof woof

Joking I hope. Their men couldn’t A final at the women’s meet! (Slight exaggerating but you get the idea). Their men have to at least show up, unlike their women

Oh, da dawgs will indeed show up. They’ve got a fire under them after ESPN and the liberal media kept them out of the CFP Playoff, woof woof woof

Erika Brown-esque there. Hope it works out well for him.

I’m choosing the sprint factory on this one. NC State wanted to win last year they’ll come back to win. Jared, are you suggesting we should pick Will Davis to win the 50free this year? You trying to control our pick’em picks?

Dressel split 18.6 at SECs… then he also went 18.6 individually at NCAAs. So I don’t know if I’d be picking him to win the thing. But it’s an interesting comparison to watch for from a development perspective.

Jackson’s first swim (presumably prelims of this relay) will do a lot to clarify how this meet is going to go for Texas. If he’s on his game, he’s a three-event scorer (potentially two event winner) and the lynchpin of all four relays he’s on – whether that be free or fly in the 200 MR.

4
0
Reply
horninco
Reply to  JP input is too short

He def needs to put it all together in the FInals of a major meet. Struggled at NCAA last year since he tapered for Big 12’s to get cuts, and then swam third fastest overall time for the US in the B final at nationals. Needs to peak at the right time.

As for this relay, you can make the case that Haas swims it but he has the 500 Free final right after it. Tough call. If he were appreciably faster than other options then you go for it. Could be a tough call.

4
0
Reply
JP input is too short
Reply to  horninco

I think you sit him in the morning and see how Kreuger goes. If he’s 18., don’t have to worry about putting Haas in.

Wasn’t Seliskar 18high at the Georgia tech invite this year