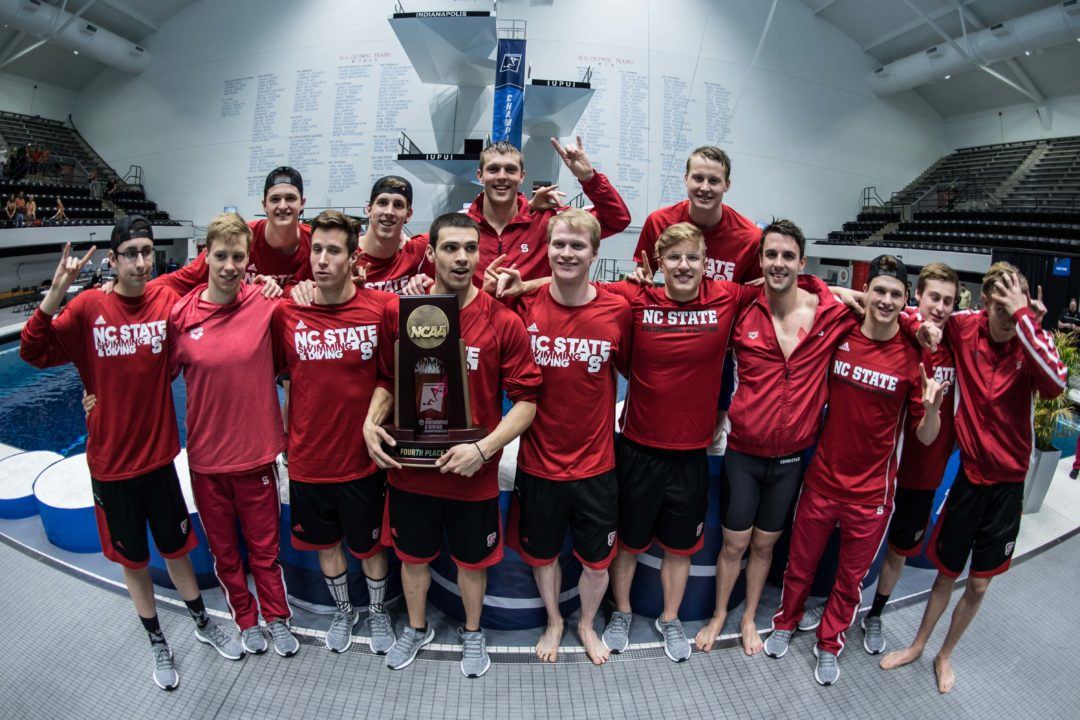 Led by a trio of returning individual champions, NC State should be in cruise control en route to their 5th-straight ACC title. Archive photo via Mike Lewis/Ola Vista Photography

The NC State Wolfpack have now won this meet four years in a row, and they’re the clear favorite to win once again this year. They lost some of the top-end talent, including NCAA champion Anton Ipsen and Ryan Held, who for two or three years was the best college sprinter not named Caeleb Dressel. But they’re returning plenty, Nyls Korstanje should help make up for Held’s loss on the sprint relays, and, as we saw once again with the women’s team last week, NC State is about as a well-balanced team as you’ll find.

Louisville took 2nd last year, and Carlos Claverie was the only big name they lost due to graduation (although Etay Gurevich, last year’s 400 IM runner-up, did transfer to Arizona). The Cardinals have some pretty heavy hitters at the top of the lineup to produce some solid relays — they won the 200 medley relay last year — and enough depth that they will undoubtedly be in the top three once again.

It’ll be interesting to see what UVA looks like this week. They had a great meet last year, and like Louisville they didn’t lose much to graduation, but they’ve taken a bit of a hit in terms of sprinting, especially when Lewis Burras left the team mid-season. Still, they should also be a lock for another top three finish.

Notre Dame took 4th last year, and they return most of their core, including distance star Zach Yeadon. As always, FSU will rely on its sprint relays, as they did last year en route to a 5th-place finish. After taking 6th place last year, this is the first ACCs for  Virginia Tech under new head coach Sergio Lopez.  Their sprint relays had some fast times early in the season, but didn’t show much at the fall invite, so it’ll be interesting to see what they do this week.

Crosstown rivals Duke and UNC placed 6th and 7th last year. The Tar Heels took the bigger hit from graduation, as Henry Campbell and Michael McBryan in their final ACCs.

Last year’s 9th and 10th finishers, Pitt and Georgia Tech, have been the near the bottom of the conference for a while, but both have shown some promising times this year, especially in the IM events. Pitt had some nation-leading times earlier in the season, and Georgia Tech had a strong showing at their fall invite.

Boston College continues to build under head coach Mike Stephens, who took over the team just over two years ago.  Last year the Eagles had two individual scorers for the first time in three years, and as long as they don’t DQ any relays, they’ll score enough to finish ahead of Miami, who earned 161 diving points last week, but doesn’t have a swim team.

Boston College – Taylor Cortens (senior IMer/breaststroker)– Colin O’Leary (sophomore butterflier) — Cortens placed 21st last year in the 100 breast, but he’s already been a second faster in the 200 breast this year than he was last year, and sits 11th on the psych sheet in that event. O’Leary dropped nearly three seconds off his seed time last year to make the C-final in the 200 fly; he’s already been about as fast this season as he was at ACCs last year, so a similar drop could put him into the B-final.

Florida State –  Kanoa Kaleoaloha (senior free) Will Pisani (senior sprinter), Max Polianski (junior IM/fly)  –  Kaleoaloha and Pisani have formed the core of the Seminoles’ strong sprint group for years now, and both are seeded in the top eight in the 50 and 100 freestyles. Polianski emerged last year by making the A-final in the 200 IM, as well as a pair of B-finals.

Georgia Tech – Rodrigo Correia (senior freestyler), Christian Ferraro (senior distance freestyler and breaststroker), Caio Pumputus (sophomore breaststroker/IMer) – Pumputus took 2nd in the 200 breast last year, and is the top seed, and a virtual lock for the A-final, in the 200 IM. Correia and Ferraro both have a pair of top six seeds, and they’ll be part of the Yellow Jackets’ medley relays that have looked so good this season.

North Carolina – Valdas Abaliksta (sophomore breaststroker), Alvin Jiang (sophomore backstroker) – these two are the only Tar Heels seeded in the top ten in any individual event, and along with diver Greg Duncan, they were the only two men besides the now-departed Campbell and McBryan to score 30 or more points.

NC State – Nyls Korstanje (freshman sprint freestyler), Jacob Molacek (senior freestyler/breaststroker), Justin Ress (senior freestyler/backstroker), Coleman Stewart (junior backstroker/butterflier) Andreas Vazaois  (senior everything-er) – Once again, for the sake of brevity, we have to leave guys off this list who be the clear stars on almost any other team in the conference. Ress, Stewart, and Vazaois are the defending conference champions in the 200 free, 100/200 back, and 200 IM, respectively. Molacek didn’t win any titles last year, but his versatility is one of the things that makes the Wolfpack relays so lethal. Korstanje is seeded first in the 50 free, and he should help make up for the loss of Held on the sprint relays.

Notre Dame – Marci Barta (freshman IMer), Aaron Schultz (junior butterflier), Zach Yeadon (sophomore distance free) – Yeadon is the highest-finishing returner in the 500 and 1650, where he appears to have the edge over Louisville’s Acosta. Barta has had a great freshman season and is the highest seed in the 400 IM. Schultz actually scored more points last year than Yeadon did, and should be a big part of Notre Dame’s relays this year.

Pitt –  Samy Helmbacher (junior IMer), Blaise Vera (sophomore sprinter) – Helmbacher had the fastest time in the nation in early November after he won the 400 IM at at the ACC-Big Ten Challenge, and should make the A-final of both IM events. Vera didn’t swim at ACCs last year, but has set school records in the 50/100 free and the 200/400 free relays already this season.

Virginia –  Brendan Casey (senior freestyler), Zach Fong (senior butterflier)  Robby Giller (sophomore everything-er), Ted Schubert (sophomore IMer)  – It was tough to narrow this one down, as the Cavaliers have a pretty well-balanced team. Casey and Giller each made the top eight in three different events last year, both scoring 76 points. Fong set the 100 fly school record in a dual meet last month, and Schubert has a shot at three A-finals this week.

Virginia Tech – Antani Ivanov (freshman butterflier), Lane Stone (sophomore freestyler), Samuel Tornqvist (sophomore IMer), Norbert Szabo (senior IMer/butterflier) – Szabo was VT’s leading scorer last year, but Stone could put up three top-eight finishes, and Tornquvist has a shot as well. This is the first yards taper meet for Ivanov, who joined the Hokies at mid-season and is a world juniors bronze medalist in the 200 fly.

Louisville pulled off something of an upset by winning the 200 medley relay here last year by half a second, and they return three of their four legs. But it’s actually Georgia Tech that tops the psych sheet after the Yellow Jackets dropped a 1:24.23 back in the fall. You definitely have to keep an eye on NC State, although we’ll have to see if they stack relay or not.

This event should be compelling if for no other reason than none of the top three names on the psych sheet come from one of the traditional powers. Notre Dame’s Marci Barta leads the way with a 3:41.67, followed by Georgia Tech’s Caio Pumputis at 3:43.00, then Pitt’s Samy Helmbacher at 3:44.43. But those times are just from this year, and you can’t count out NC State’s Eric Knowles, especially after the Wolfpack women swept the top four spots in this event last week. UVA will be dangerous here too — watch out for Ted Schubert, who last year DQ’d in prelims only to drop a 3:39.52 in a solo time trial that evening.

Notre Dame’s Zach Yeadon is the fastest returner in both the 500 and the 1650 free, although Louisville’s Acosta could give him a run for his money. Of course, you can’t count out the NC State distance crew, especially under new assistant coach Mark Bernardino, so watch out for someone like Knowles to challenge the two front runners with a big time drop.

This should be a fun one. It’ll feature last year’s ACC champ (Albiero), the 2018 NCAA champ (Vazaois), a world junior bronze medalist (Ivanov), and the bronze 2018 Pan Pacs bronze medalist (Harting), not to mention some intriguing guys like Ferraro, Fong, Schultz, and Schubert. Vazaois is one of the fastest men in history in this event, but clearly he wasn’t full tapered last year, and probably won’t be again, giving any of the aforementioned men a chance to sneak in and grab the title in what promises to be an exciting race.

Men’s diving competed last week, and when you add those results into our Swimulator projections (using season top times), this is what you get:

NC State is projected to score about 100 points less than than were projected last year, but they outscored their projections by 100 points, so they ‘re comfortably in the lead. Louisville and UVA are clearly vying for 2nd, and neither team appears to have shown their hand yet this season.

FSU and Notre Dame are neck and neck right now, but last year FSU scored about 300 less points than they were projected to. Those two teams should be in 4th and 5th at the end of the week.

It’s a lot harder to predict spots 6-10, especially given Georgia Tech’s strong performances earlier this season and it being VT’s first season under Lopez, but BC and Miami should hold their projections at 11 and 12.

Thanks for the article Robert, as always.

One thing though, I thought Jacob Molacek is a senior this year?

Sure is. Fixed, thanks!

This will be NC State’s sophomore class’s coming out party! In particular, Giovanni Izzo and Knowles (not that he was bad at all last year as a frosh) but to include McIntyre and Johnson. Should be fun!!!

Is the Tuesday Finals session on Watch ESPN tonight?

Can’t wait to watch the hardest working boys and best coaching staff at every distance make it 5 in a row.

Tuesday? I believe tonight(Wednesday) is the first night of finals.