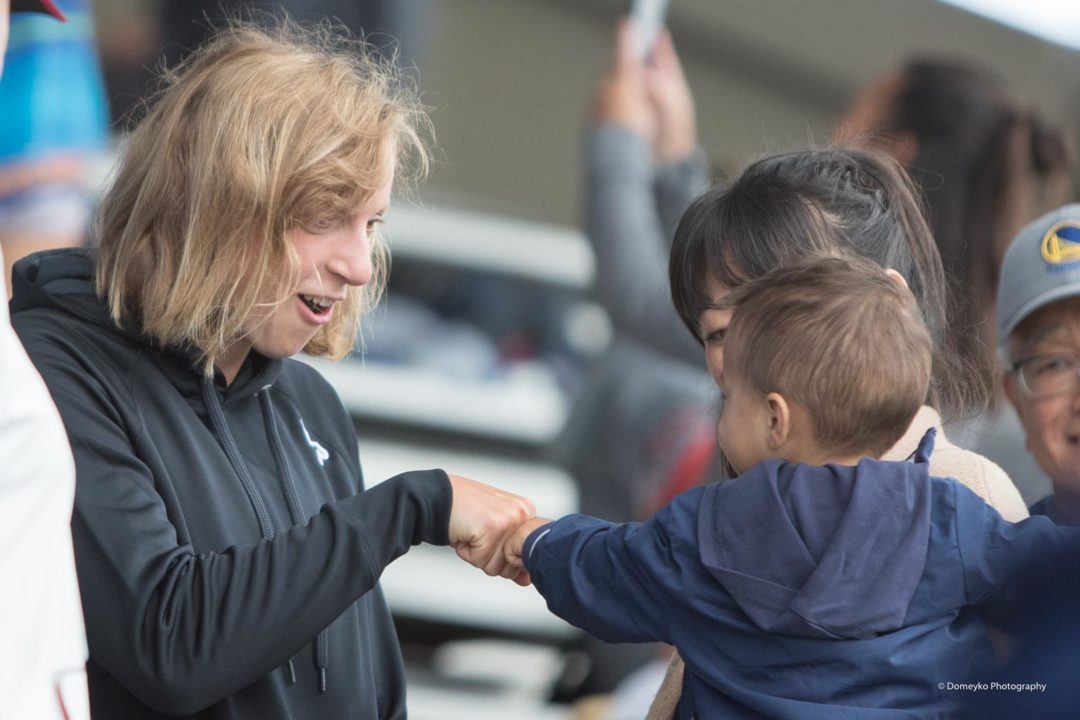 Katie Ledecky should account for at least 3 doubles if she wins the 200, 400, 800 and 1500 frees. How many doubles are needed for Team USA to start selecting second, third and fourth-place finishers to the Pan Pacs roster? Archive photo via “Rafael/Domeyko Photography”

This week’s U.S. National Championships serve as the selection meet for five major international meets, and though the selection procedures can be complex, we like to simplify them as best we can. The top two-to-four swimmers in each event should make the Pan Pacs team (and the top top two-to-six juniors should make the Junior Pan Pacs team) – but what exactly determines whether an event selects two, three or four swimmers?

First of all, if you’re a procedural nerd (like we are) or if you are a masochist (which we might be), you can read through the full selection procedure documents here. But be warned that between the five meets, the full selection procedure documents number 88 pages of somewhat-complicated language. We broke things down in the body of that post as best we could, and now we’ll try to simplify even further based on the idea of doubles.

Of course, that’s highly unlikely to happen in the real world, where stars like Katie Ledecky and Caeleb Dressel should win multiple events and perhaps qualify in even more than that. As swimmers double up in qualifying events, the roster is able to select more of the second-place finishers, and eventually the third- and fourth-placers.

So we’ll define a ‘double’ as a swimmer already qualified for the relevant international meet who puts up another qualifying swim in a different event.

How many doubles do we need?

Conclusion: How Many Doubles Should We Expect?

It seems very likely that the second-placers should get in for both meets, with only 6 and 8 doubles needed. Ledecky should account for at least three herself, assuming she wins the 200, 400, 800 and 1500 frees. Dressel should provide at least two, assuming he wins the 50 free, 100 free and 100 fly. (Dressel is likely to win the 50 fly, too, but that’s not an Olympic event and doesn’t create a double for Pan Pacs qualifying). Bear in mind that the rosters select by gender, so a second-place woman needs 6 women to double to make the team; Dressel’s doubles wouldn’t affect her selection at all.

Also remember that as more priorities get invited, the doubles will start to increase. Say Dressel wins the sprint frees and 100 fly but also takes third in the 200 free. When the third row of swimmers gets selected, his 200 becomes another double for roster space purposes.

With a handful of previews still in the pipeline, our running roster projections based on our event previews shows the fourth-placers well outside of qualifying for men and women at both Pan Pacific meets. Third-placers are also on the outside for girls Junior Pan Pacs, and might be iffy for boys Junior and men’s and women’s senior Pan Pacs as we add the last three events.

The upshot is that you can expect the top 2 eligible swimmers to make Pan Pacs and Junior Pan Pacs, and perhaps the majority of the third-placers. Fourth-placers are unlikely unless we get a lot of doubles.

(At the risk of making this wordy, complex story a little longer, two swimmers who take third in different events will go to a tie-breaker to decide selection. The tie-breaker is a modified version of the FINA World Rankings, with the highest-ranked swimmer making the team over the lower-ranked ones).

Confused? You’re not alone. If you’d rather not wrack your brain trying to understand the ins and outs of this selection process, fear not: we’ll be tallying up Pan Pacs and Junior Pan Pacs qualifiers (and potential qualifiers) as the meet goes along. Stay tuned to SwimSwam.com, where we hurt our brains, so you don’t have to hurt yours!

So if non olympic events such as 50 fly, back and breast do not count – Dressels 50 fly would not create a double

What will happen if it is not enough doubles, to get all second places to be selected. Who makes a decision who of second places will go. For example, Ledecky swims just few events and Leah Smith has 4 second places in 400-800-1500 & 400IM but only gets fifth in 200.
Is it a scenario when she won’t be selected.

World rankings I think just like picking between 100 back 3rd place and 200 breast 3rd place. If tie then they go to your second best event. I “think”

It’s a modified version of the world rankings, essentially world rankings from this year, plus finals times from U.S. Nationals. Highest-ranked second-placer gets in until there are no slots left.

Smith is ranked high enough worldwide that she probably won’t be in that situation. It’d be more likely someone in a weaker event is left out.

World ranking on what day? Also, what database is supposed to be used for world rankings reference. USA swimming database is not always accurate and isn’t always up to date. For example, Ikee’s 1:55 in 200 free wasn’t posted for almost 6 months.

The selection procedures specify that it’s the FINA database as of tomorrow morning at 8 AM, covering the period of January 1, 2017 – July 20, 2018 (for senior Pan Pacs) and the period of January 1, 2018 – July 20, 2018 (for Junior Pan Pacs). Then results from A finals of U.S. Nationals are added into the mix for swimmers who would improve their world ranks with their qualifying swims.