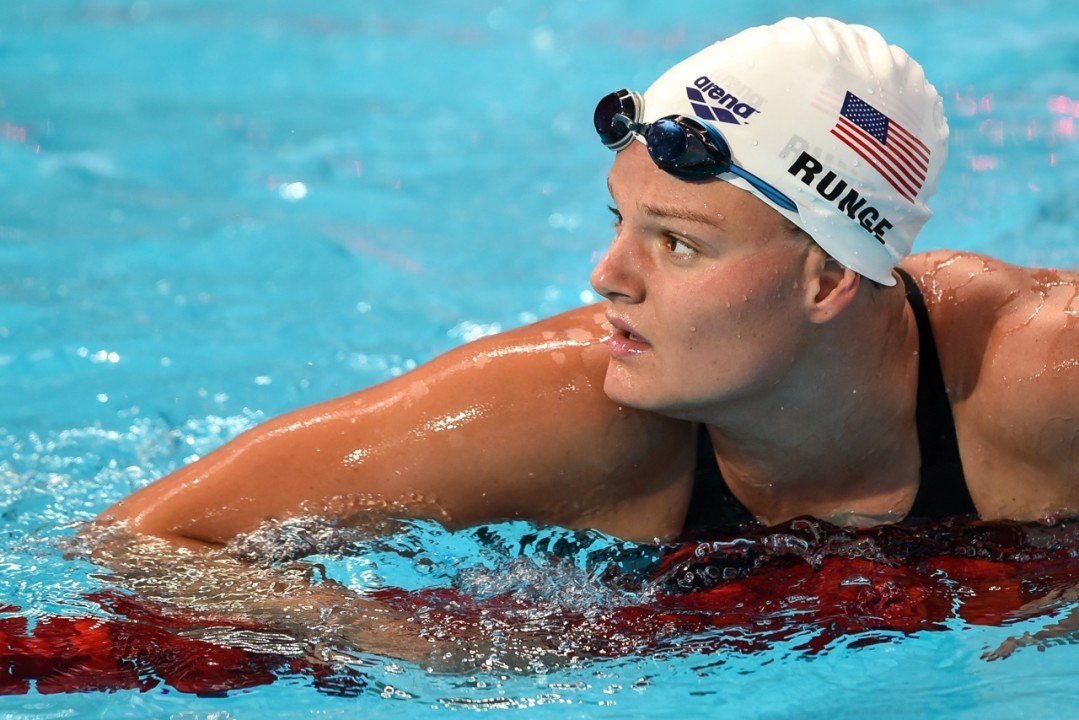 Cierra Runge and Ashley Twichell are among those that will vie for a podium spot. Archive photo via Peter Sukenik/www.petersukenik.com

After shattering her own world record in the 1500 in Indianapolis in May, everyone wondered if Katie Ledecky could do it again in the 800, just days later. Spoiler alert: she didn’t. But she still threw down the third fastest performance of all-time, 8:07.27, good for No. 1 in the world by almost 11 seconds.

So as these distance event previews always go: it’s not a matter of who will win, it’s just a matter of how fast Ledecky will go.

After Ledecky, it will more than likely be Leah Smith, who is the second-fastest American woman this year by four seconds. She was 8:25.05 last weekend in Columbus, good for eighth in the World, and 8:17.22 at the 2017 FINA World Championships last summer. Smith would have to stumble and whoever’s behind her would have to have the swim of a lifetime to grab silver.

The best battle of this race is going to be for third and fourth.

2017 third-place finisher Hannah Moore has only been 8:36.87 this year (during NCAA season in January), but put up massive drops during the short course season. She was 8:27.58 last year. Sierra Schmidt is another NCAA swimmer coming off a stellar short course season, and she’s been 8:36.48 this year; however, her best of 8:27.54 is from three summers ago.

Sixth in the U.S. this year is 17-year-old USC commit Erica Sullivan, who went her best time of 8:30.15 in Indianapolis in May. It was a three-second drop from her previous best, swum a year ago. Seventh is Penn State’s Ally McHugh, who has dropped five seconds since 2017 Summer Nationals, with her best time currently sitting at 8:30.23.

Eighth in the nation this year is Hali Flickinger, who swum a lifetime best of 8:31.03 in Atlanta in March – her previous best was 8:40.03, from December 2017. Stanford’s Megan Byrnes has also dropped significant time in the past year – about five seconds – with four of those coming this summer. She was 8:35.06 in Indianapolis in May, then dropped her best down to 8:31.58 in Santa Clara in June. Kaersten Meitz, tenth in the nation this year, dropped major time May 2017, climbed back up at the 2017 World University Games, and has since been able to basically match her best at 8:34.7.

I really do hope Hannah Moore has an outstanding nationals. Look out for a major time drop with the Wolfpack Elite distance crew, especially with the legendary Bernadino at the helm.

Anton is a prime example, with his performance at the latest PSS stops.

Becca Mann’s best time came at the Pan Pacific Championships in 2014 (8:22, 4 sec faster than the swim cited in the article).

I wasn’t disagreeing with the prediction. Just pointing out the error. Turns out she had several quicker times, more than I realized.

Katie Ledecky has changed substantially norms of 800 event. Swimming under 8:20 became must do norm. Everything above is a pedestrian pace accepted as in-season time only.
Besides Katie Ledecky (21) and Leah Smith (23) Americans have only Kate Ziegler and Katie Hoff who’s broken this barrier. It’s time already for the fresh blood to show up and another “Kat(i)e” to surprise us.

I forgot to mention Janet Evans. But only because she is a completely different story standing alone in the history of swimming.

Remember that women’s 800 free from 2007. One of the greatest races ever.
https://www.youtube.com/watch?v=om48QTqzUhE

Wow! I thought that 2013 Ledecky vs Friis race was the most tough long distance competition. But this one is much more exciting. What is the story behind Kate’s swimming suit?
Her name is rarely mentioned in discussion at this site and she is an outstanding long distance achiever.

So USA has actually big names and a very impressive history in women 800 free event.
Evans, Bonnett, Zeigler, Hoff, Ledecky and Smith. The times of those who is not competing any more are still good enough to be in finals of recent major international meets or even be a medalist there.

Ok, I’m taking it back. It is just my feelings when I’m looking at times mentioned in this article. Maybe it’s because we have already six swimmers this season with times 8:20 and faster. Therefore swimmers with actually good times between 8:21 and 8:30 are looking in my eyes like swimmers belonging to the second echelon.
Also, I mentioned “Ledecky effect” because almost all girls who are breaking 8:20 begging talking about challenging Ledecky considering their times just a warming up step in their careers.

Surprise to see Erica Sullivan not even in top 8.
Some of the swimmers already qualified for OW, I see them will pass on the chances for others, at least for this shorter race.