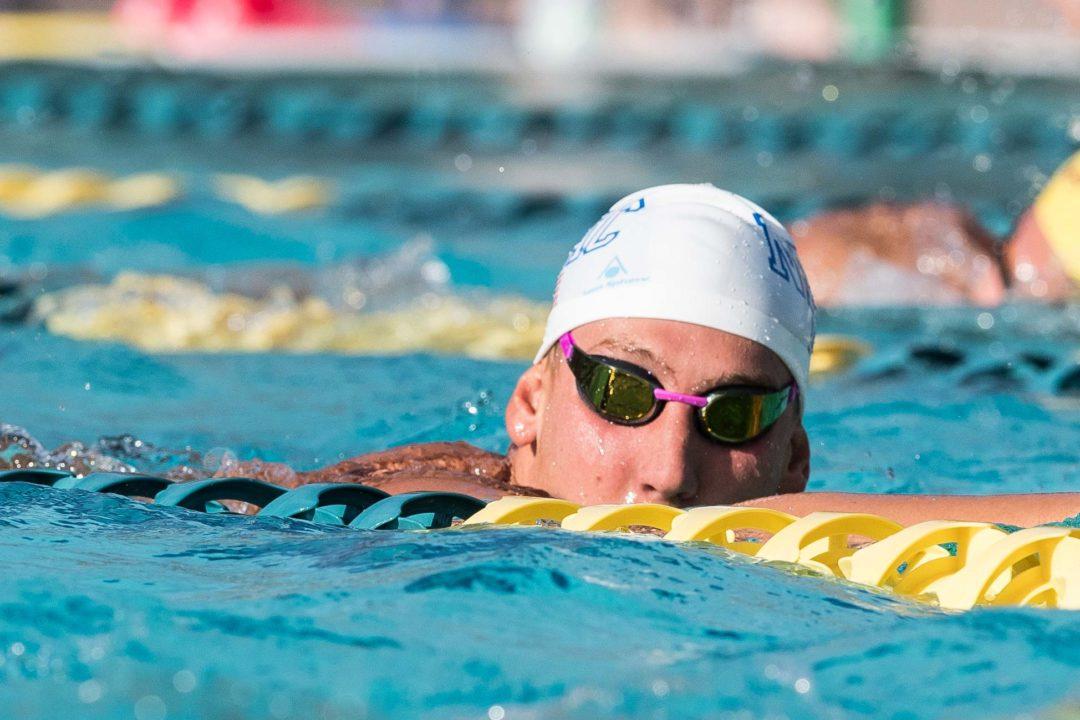 Chase Kalisz will go after his own Pro Swim Series Record in the 400 IM, while teammates Ryan Murphy and Jacob Pebley will battle it out in the 200 back. Current photo via Mike Lewis/Ola Vista Photography

The 2018 Tyr Pro Swim Series stop at Mesa is set to continue tonight in Arizona. Swimmers will compete in prelims of the 400 IM, 100 fly, 200 back, 200 breast, and 200 free. A couple of the top races to watch on the men’s side are the 400 IM and 200 back. Chase Kalisz will go after his own Pro Swim Series Record in the 400 IM, while teammates Ryan Murphy and Jacob Pebley will battle it out in the 200 back. On the women’s side, Allison Schmitt will compete in her first final since Rio in the 200 free. Olivia Smoliga looks to crack 2:10 for the first time in the 200 back after a big best time of over 5 seconds in prelims.

Kate McCarville (4:59.25) jumped out to the early lead, but Vien Nguyen quickly took over after the first 50 of the back leg. Though Nguyen built a lead through backstroke, Connie Dean made huge gains on the breast leg. She was in 7th after fly and 6th after back, but pulled into 2nd after breast. Nguyen was too far ahead, however, and had the fastest free leg to boot as she brought home the gold. Dean wound up 2nd, followed by Ilektra Lebl.

Chase Kalisz was head and shoulders above the field, leading from start to finish to win it. He was well off his 4:08.92 from Atlanta last month, but still 4 seconds ahead of the field. His 4:08.9 is the current Pro Swim Series Record. Josh Prenot was the only other swimmer to join him under 4:20 tonight. He was within a second of his time from this meet last season.

Louise Hansson jumped out to the early lead by just a hundredth over Kelsi Dahlia, 27.63 to 27.64, but Dahlia came home faster to win it by over half a second. Notable, Dahlia and Hansson are the 1st and 2nd fastest swimmers in history respectively in the 100 yard fly. Hansson was a 58.12 this morning for a new lifetime best, but was shy of that tonight. Likewise, Hellen Moffitt swam her fastest ever in-season time this morning, but was slightly off in the final to take 3rd. Mallory Comerford was the only other swimmer sub-1:00 in the final at 59.34 for 4th place.

After tying for top seed this morning, Tim Phillips and Michael Andrew were just 5 hundredths apart tonight. Both were slightly faster than their prelims swims. Andrew was out with the early lead in 24.49 to Phillips’ 24.65, but Phillips was a nail faster on the back half to win it in 52.88. Pace Clark, a 2017 U.S. World Championships team member, dropped nearly a second from his prelims time to move from 8th to 3rd. Clark held off Kaan Ayar (53.63) by a nail into the finish.

After making a massive 5-second drop from her best time in prelims, Olympic medalist Olivia Smoliga dominated the field tonight in 2:10.94. That was about 8 tenths shy of her prelims swim, but still enough to win by over a second. She was still significantly under her former best coming into the meet. This morning’s 2:10.12 smashed her former best 2:15.88 from 2013. Fellow Georgia postgrad Hali Flickinger was 2nd, coming from behind to out-touch Sonnele Oeztuerk.

Teammates Ryan Murphy and Jacob Pebley, the 2 fastest men in the world this year, battled for the title. Pebley had the early speed, but Murphy had taken over slightly by the 100-meter mark. He continued to build his lead, winning in 1:56.51 as Pebley held on for 2nd. They were the only men in the final to break 2:00. Notably, fans have speculated how the heavy winds may be impacting the swimmers here. The top swimmers have been significantly slower than they were at the former Pro Swim meets thus far.

Breeja Larson took it out with the lead halfway, but Emily Escobedo made her move to take the lead on the final 50 and never looked back. Escobedo finished in 2:26.80. That was within a second of her fastest ever in-season time of 2:25.94 from the Austin Pro Swim in January. Behind her, Micah Sumrall ran down Larson for silver, 2:27.09 to 2:27.77.

Olympic breaststroker Kevin Cordes had the lead through the 50, but Olympic silver medalist Josh Prenot answered back to take the lead at halfway. Prenot extended his lead through the back half, winning by over a second in 2:11.30. Nic Fink, a member of the 2017 U.S. World Championships team, was out in 7th halfway, but hammered home to take silver. Cordes wound up 4th in 2:13.14, as Carlos Claverie ran him down for the bronze.

World Champs gold medalist Leah Smith raced with 2 of her gold medal relay teammates as she, Melanie Margalis, and Mallory Comerford stepped up for the final. Smith, swimming in her first meet of 2018, led from the start as she won gold. Behind her, margalis and Olympic gold medalist Allison Schmitt raced for silver, with Schmitt holding off Margalis by a hundredth. Comerford wound up 7th tonight in 2:02.72.

Indiana postgrads Marwan El Kamash and Zane Grothe were neck-and-neck in the race for gold. Though junior phenom Patrick Callan was out in front at the halfway mark, the Hoosiers brought it home as El Kamash outsplit Grothe to win it in the final meters. Callan once again swam sub-1:50 to take 3rd, while Fynn Minuth was 4th in 1:52.14.

We’ve never had close to 40mph gusts so serious conditions out there that led to our having to lower the scoreboard because it was swinging back and forth do much! Backstroke flags were close to 18″ off….thankfully no broken hands like two years ago!

Yeah maybe that’s why people are skipping it. Looks just as bad as last year

Can confirm it’s very windy. My bun is a mess. Also, driving from Tucson to Mesa was a treat cause the wind was blowing massive sand clouds all over the road haha.

Times except for 50s will be very slow

I like to think the wind is the only reason I was ever slow at this meet 😉 I totally would’ve been in the A final instead of the D if it wasn’t for that horrible gust!!!!

Stream is not working. Can anyone help?

Is your ad blocker enabled? I didn’t feel like chasing down the cause in Firefox, so I fired up Explorer