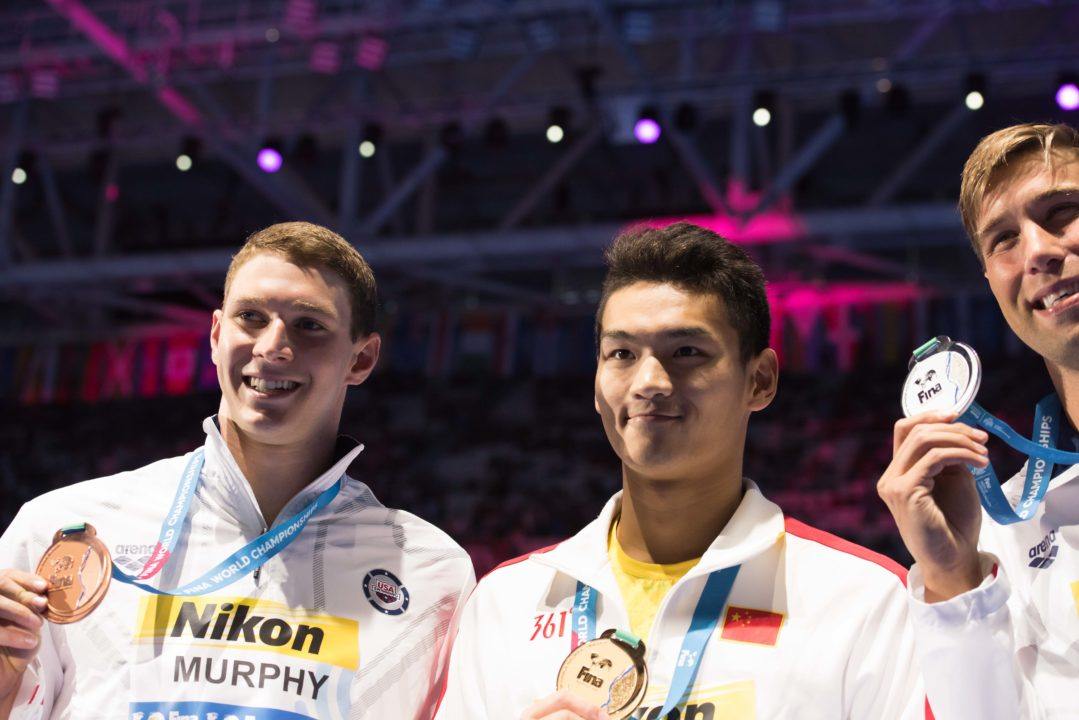 Matt Grevers, Xu Jiayu and Ryan Murphy are just a few of the incredibly talented backstrokers who will be competing in Hangzhou. Archive photo via Mike Lewis/Ola Vista Photography

The men’s backstroke events are shaping up to be some of the most competitive and exciting races contested in Hangzhou. A lot of the attention and hype for the competition has been centered around the short course metres debut of Caeleb Dressel and his impending battles with Vlad Morozov and Chad Le Clos in the sprint free and fly events, and rightly so, but the lineup entering the back events is absolutely stunning.

The three fastest men in history in the SCM 100 back are in attendance in Xu Jiayu, Kliment Kolesnikov and Matt Grevers, all of whom have held the world record, and we’ll also see the fastest man ever in both yards and LC metres in Ryan Murphy. Additionally, SC 200 world record holder Mitch Larkin is in the lineup, along with reigning World and Euro LC champ in that event Evgeny Rylov.

Xu is the lone returning finalist from two years ago in Windsor (where he was 8th), and was the fastest man on the World Cup Circuit this year with a swim of 22.70. He also broke 23 seconds on two other occasions, which is a good sign of consistency.

However, Brazilian Guilherme Guido was faster in late August at the Jose Finkel Trophy, swimming the 3rd fastest time ever in 22.68, and also was 22.75 at the same meet.

Kolesnikov, who broke the 9-year-old super-suited long course world record in this event this past summer, swam a lifetime best of 22.82 in November at Russian Nationals, and his countryman Rylov (22.97) is the fourth man to have broken 23 this year.

This race almost seems like a pick ’em between Guido, Xu and Kolesnikov, but we cannot forget the impact Americans Murphy and Grevers will bring. Not only are they two of the greatest backstrokers of this era, both having won Olympic gold in the 100, they’ve also proven to be extremely talented in short course swimming.

Grevers own a personal best of 23.19, but opened up his world record breaking 100m swim in 23.56 which indicates he has the ability to get under 23. Murphy has no SCM 50 back swims on record, but is the fastest swimmer in history in yards (20.20), and also broke the LC American Record in the summer (24.25). The biggest question with these two, along with many of the Americans, is what kind of form they’ll be in. Neither swimmer has competed since August.

Then there’s also Italian Simone Sabbioni, who only has one short course meet under his belt this year (where he went 23.96), but did upend Kolesnikov for the European title last December in a time of 23.05.

Those look to be the medal contenders, and then there’s a strong group of men who will be vying to make the final who have been around 23-mid this year. Larkin, Takeshi Kawamoto, Dylan Carter, Kousuke Matsui and Christian Diener all fall into that category, and Romanian Robert Glinta is another to watch out for as he’s now back home training after spending a year at USC. He went a lifetime best of 23.19 at the 2017 Euros.

In 2006, Ryan Lochte led off the American 400 medley relay at the Short Course Worlds in Shanghai in a time of 49.99, becoming the first man to ever crack 50 seconds. Fast forward twelve years, and we’ve now seen six men go below 49 seconds. Stanislav Donets, Arkady Vyatchanin and Nick Thoman all did it suited in 2009, and then Donets became the first to do it in a textile in 2010.

Those three will converge at this year’s Worlds, along with Murphy, who is the fastest in history in both long course metres and short course yards. The former Cal Bear did swim this event once at the 2012 Worlds in Istanbul, leading off the prelim medley relay in 50.91. His long course best at that time was 53.76, about two seconds slower than it currently is (51.85), so if we just chop two off his current SCM best time he’s right in that 48-high range where the others are.

In addition to those four, Larkin is certainly in the mix here having been the 2nd fastest in the world this season at 49.38, and is the defending champion from two years ago. Andrey Shabasov beat out Rylov at this event at Russian Nationals, and is the 2016 silver medalist (49.69), and Ryosuke Irie, Glinta and Guido also pose threats and have all been under 50 before (with Guido going a lifetime best in August in 49.62).

Xu has been lighting it up on the World Cup, but the 200 would have to be considered his weakest event of the three. He has also been known to be very aggressive opening up his 200s in the past (54 to the feet at both 2017 Worlds & 2018 Asian Games), which may not come back to bite him as much in short course than it does in long course, but with this event coming on the final night of competition, fatigue could potentially play a factor if he opts to swim his race that way. Larkin is the world record holder with his 1:45.63 from 2015, but hasn’t been able to match his magical form that year since.

Murphy will also swim this event, and could be seen as the favorite. He won bronze six years ago in 1:48.8, and has improved leaps and bounds since then. His former Cal training partner Jacob Pebley, who recently started training with Team Elite in San Diego, will be the second American entrant here, and was the silver medalist two years ago in 1:48.9.

Irie, Diener and Russian Grigory Tarasevich will also be factors here having been 1:50-point this year.

Is there any chance Michael Andrew swims the 50 back? His 23.11 from Singapore world cup is technically the fastest PR on the American team…

Americans will definitely be at a disadvantage here. It is so important to nail the flip turns, and Grevers/Murphy/Pebley are probably not doing a lot of scm practices. That’s okay by me, they will be an exciting X-factor.

Per USA Swimming’s roster, Murphy and Grevers will be their entrants in the 50 back (they went off the National Team rankings, where both were ahead of Andrew). It would also be a massive scheduling conflict for Andrew, as he potentially already has the 4×50 free relay, the 100 IM final, the 50 fly semis and the 50 free final on the same night as the 50 back final.

I think the author is forgetting Murphy’s SCY backstroke lol.

Definitely didn’t forget, but hard to assume he’ll turn up in peak NCAA form when the others have been racing consistently over the last few months and going fast. Whoever wins is going to need a perfect race.

Other than ‘because he’s an American,’ why are the comments so dead-set that Murphy is going to sweep the backstrokes? Kolesnikov and Xu are both in a better racing rhythm (because they’ve raced in the last 6 months) and both have better times than Murphy…

Doesn’t mean much in this context unless you have a reference point for the other two in SCY.

I assume everyone knows this, but if the whole world swam SCY, not every record would be held by an American…

Murphy swam 51.9 in LCM 100 back this year, well ahead of Kolesnikov and Xu. He needs bad underwater skills to lose in the SCM version.

So did Xu… and Kolesnikov has the 50 bk world record. If he has anything other than a perfect race he loses and thats the same for everyone in this field.

No one is saying Murphy will sweep the backstrokers, but he should be the favorite in 100 back.

No way Murph loses the 100 or 200. 50 will probably be Kolesnikov but Murph isnt prepared to lose. I heard he been training harder than ever lately. Throwin down 45s 100s in yards back to back with a few minutes rest :O

Men’s backstroke is full of talent these days.

I’ll be looking for the videos on those races. They’re going to be a preview of the 2019 Worlds and the 2020 Olympics.

It’s a lot of time underwater, going to be in serious oxygen debt vs LCM where you can breathe all you like the majority of the race.

All swimmers would say that LCM 200 back is harder, your legs are gone by the 2nd 25

If that were true (and I don’t think it is), then he must be really horrid on top of the water, given how far he is from the World Records in all 3 distances, especially over the last 3 years.

He still lost to Kolesnikov at last year’s SCM Euros though.