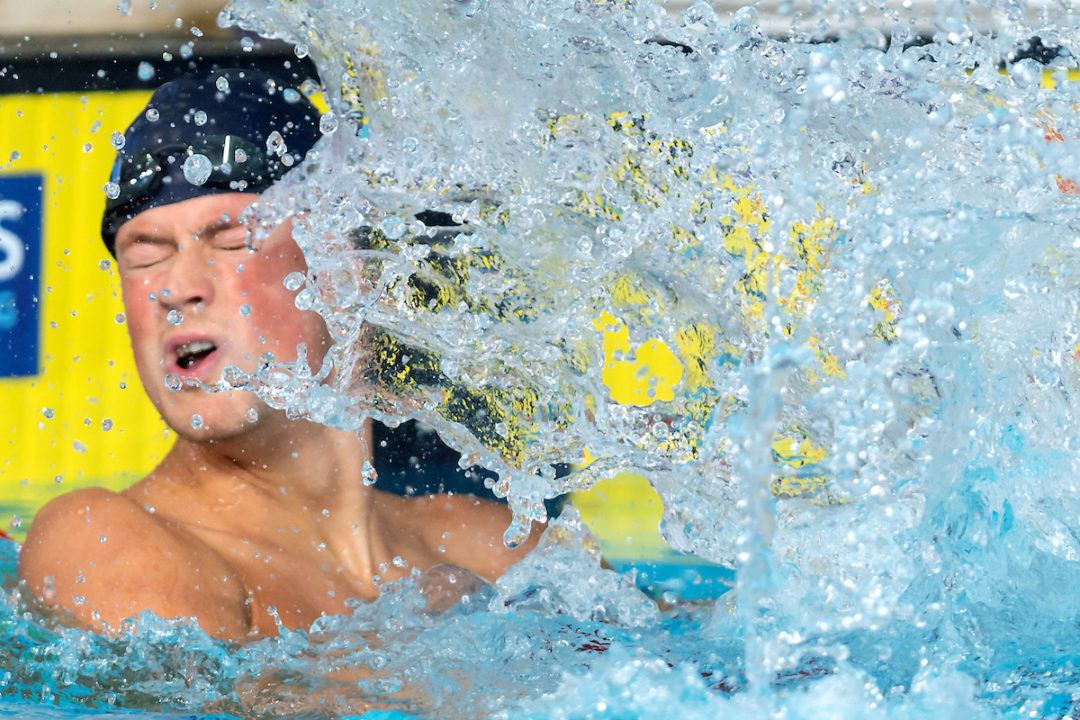 Mykahilo Romanchuk is arguably the favorite in the men's 1500 at the upcoming Short Course World Championships. Archive photo via Andrea Staccioli/ Deepbluemedia /Insidefoto

Both the men’s 400 and 1500 free events are relatively wide open heading into the upcoming Short Course World Championships, which get underway on December 11th from Hangzhou, China.

Two years ago in Windsor, South Korean Park Tae Hwan was untouchable winning the 200, 400 and 1500, but he won’t be there this year. There are a ton of men capable of taking the distance events, led by a slew of Europeans, an American, and one of the greatest distance freestylers of all-time.

The mile looks like there are three, maybe four men capable of winning, but the 400 feels like it could go any which way. A total of seven men have been sub-3:40 this season, but only four of them will be competing here.

Aleksandr Krasnykh, the 2016 silver medalist behind Park, won Russian Nationals in 3:36.84 which ranks 1st in the world for 2018, and then his countryman Martin Malyutin was 2nd in 3:37.84. Krasnykh owns four of the top-22 swims of all-time in the event, is the reigning European SC champion from last December, and his 3:35.30 from Windsor ranks him 2nd to only Peter Bernek in terms of best times in the field.

Bernek won the 2014 gold in what still stands as the CR in 3:34.32, and also took the 2015 European title. Krasnykh has gotten the better of him recently, finishing one spot ahead of the Hungarian at both the 2016 Worlds and 2017 Euros, but Bernek did show some intriguing form in early November with a swim of 3:39.72 at the Hungarian SC Championships.

The other man in action whose been under 3:40 this year is Italian Gabriele Detti, who sat out of both the 2017 SC and 2018 LC European Championships due to a nagging shoulder injury. He looks to be back on form after going 3:39.08 in November, and is certainly a medal threat having been as fast as 3:37.22 at the 2015 Euros. He’ll be looking for a bit of redemption after missing the final in each of the last three World Championships.

And then there’s China’s Sun Yang, the winner of the last three LC World titles in this event and the 2012 Olympic champion. He hasn’t done a short course race since 2014, when he went 3:37.10, but is coming off a strong performance at the Asian Games in this event (3:42.92 LC) and will be looking to wow the home crowd here.

Others in the mix here are Ukrainian Mykhailo Romanchuk, who was the 4th fastest swimmer in the world this year in long course and has been 3:39 before (2016), Poland’s Wojciech Wojdak who was 4th in Windsor and has been 3:37 twice (but only 3:43.5 this season), and Norwegian Henrik Christiansen who has also been 3:37 before but only 3:41.7 this year.

There’s also relative unknowns Matteo Ciampi (ITA), Ji Xinjie (CHN) and Fernando Scheffer (BRA) who have all been 3:40 this year. Velimir Stjepanovic (SRB) and Breno Correia (BRA) are also right there with 3:41s.

Update: upon release of the start lists we’ve found that Sun Yang hasn’t entered any individual events, so he’s been removed from our top-8 predictions. Mykhailo Romanchuk hasn’t entered the 400, so that pick has been changed as well.

The 1500 shapes up to be another great battle between Gregorio Paltrinieri and Romanchuk, who swam side-by-side for the majority of the 2017 World Championship final (LC) before the Italian ultimately pulled out the win. Combined, the two of them own four of the fastest six swims in the history of the short course 1500, with Paltrinieri being the only man ever to break 14:10 in 14:08.06.

Paltrinieri has medalled at three consecutive SC World Championships in this event, including winning the title in 2014, and posted a time of 14:25.08 at the beginning of December to rank him 2nd in the world behind the Czech Republic’s Jan Micka. Romanchuk is 3rd fastest at 14:27.93.

However, Romanchuk has had the edge over the 2016 Olympic gold medalist recently, beating him by eight seconds to win the 2017 Euro SC title last December, and then the Ukrainian won silver over Paltrinieri’s bronze at the LC Euros in August. Romanchuk is in rarefied air with three swims sub-14:20, with only the great Grant Hackett matching that feat.

Those two are the big favorites, and then the only other swimmers who look like they have a realistic shot at gold are Grothe, perhaps Micka, and of course Sun.

Grothe has been on fire over the past year, swimming the fastest 1650 in history by over four seconds last December at the U.S. Winter Nationals, and then resetting his long course best four times during the year which culminated in a silver medal at the Pan Pacs in 14:48.40. He has no SCM 1500s under his belt, but his record yards swim converts down to 14:23.3, and seeing this comparison between his training times this year and last year, he looks like he’s coming in on the best form of his career.

For Micka, his swim in mid-November was a bit out of nowhere. He had been 14:35.11 at the 2015 Euros where he finished 4th, dipped below that best time in October in 14:34.65, and then blew up with the 14:24.88 which put him 1st in the world. He’s certainly on the rise, still just 23 years of age, but after such a big drop it’s difficult to predict if he’ll be able to go any faster less than a month later. However, he’s coming in with the hot hand, which puts him in the conversation.

Sun is a major wild card in this event. His 200 and 400 have been in top form over the last several years, but he hasn’t broken 14:50 in long course since 2014. At the recent Asian Games, he did just enough to win in a time of 14:58.53, ranking him just 15th in the world after previously being untouchable in the race from 2011 to 2014. He has the capabilities to win, but missing the final or even scratching out wouldn’t be huge surprises either.

Also in the hunt will be Christiansen, who was 5th in 2016 but dropped a big best time last year at one of the World Cup stops in 14:21.53. He’s been a respectable 14:30.72 this season, ranking him 5th in the world (and 4th among those competing in Hangzhou), and should be expected to push for a medal.

Other factors include Russians Malyutin and Yaroslav Potapov, who were both 14:32s at their National Championships, along with China’s Ji and Ukraine’s Sergii Frolov, who were 14:35 and 14:38 respectively on the World Cup circuit. Another name to watch for is Poland’s Wojdak, whose season-best is only a 14:54 from October but was 3rd in 2016 where he went a lifetime best of 14:25.37. It’s worth pointing out he was also a 14:54 in October of 2016 before going that 14:25.

Gabriele Detti, who as we mentioned earlier is coming off a shoulder injury, would certainly have been in title contention given he’s been 14:18 twice in his career, but he hasn’t swum a 1500 this year and the second Italian spot looks to be going to Domenico Acerenza.

Sun Yang didn’t enter any individual races. I have their specific entry list, but I don’t know how to put it here.

Grothe will show out here

That is… not the most flattering picture!