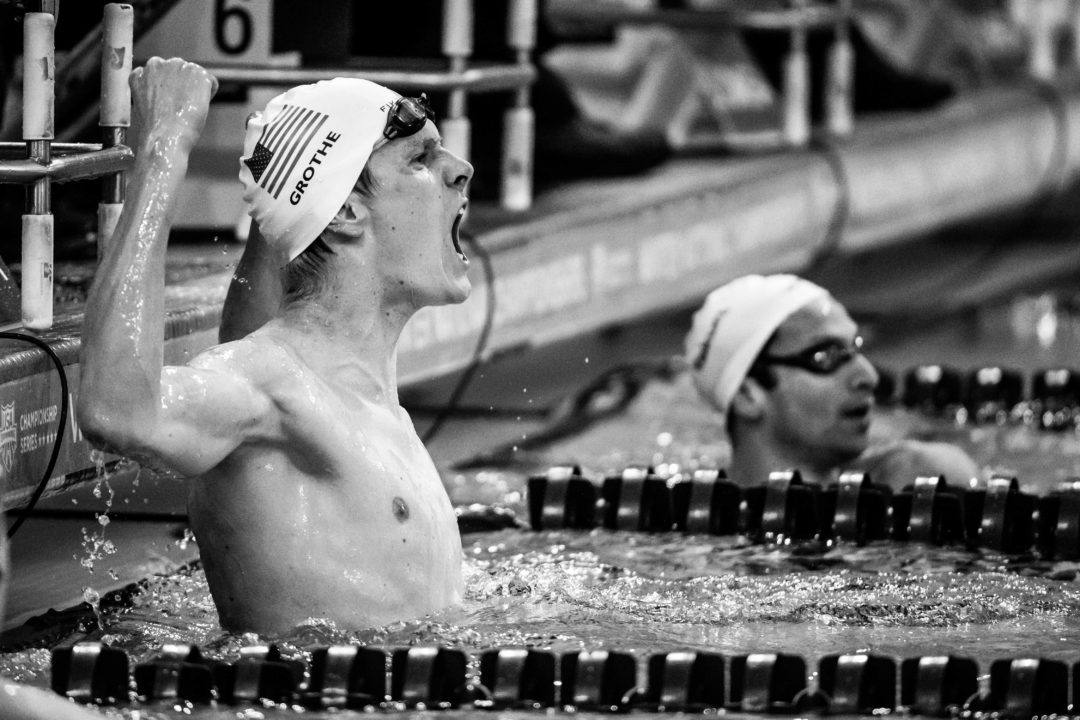 Zane Grothe has destroyed another American, U.S. Open, and Championship Record at the 2017 U.S. Winter National Championships.  in the men’s 1650 yard freestyle. Grothe swam 14:18.25 on Saturday in the fastest heat of the timed final. That won the race by more than 25 seconds, and cut over 4 seconds from the old fastest-ever swim that was done by Clark Smith at last year’s NCAA Championship meet in 14:22.41.

Smith also held the 500 free record that Grothe broke by more than a second earlier in the meet.

From the start, it was clear that Grothe was going after the record. He already was more than a full second ahead of record pace by the 150 yard turn, and he continued to build from there. While he gave back some time on the record over the last 250 yards after an early aggressive effort, by then he was already 6 seconds ahead of record pace and had room to give.

Grothe’s previous best time was a 14:29.05 that he swam at an LSC championship in February. Before that, his best time came when he was just 19 – a 14:37 done at the 2012 NCAA Championships after his sophomore season.

That swim from Grothe bumps Sebastian Rouault out of the list of the top 10 performers (and performances) of all time – those two lists are identical.

He paid dearly for what? His splits were consistent and closed in 24.2

And more importantly he got the record

I think it would be great if you compared Smith vs Grothe on the final 250 yards. It’s well written now

Wow! This event has gotten really interesting over then past year!

Last year it was an insane race

Zane grothe and Katie ledecky should get in the water and battle it out. Give her a 25 yard headstart.
I think he can go 4:06 in the 500 yard free.He now has two of Clark smith,s records. Now only the 1000 yard free is left. What was his 1000 split?

Grothe is 45 sec faster than Ledecky in the 1650. To make it competitive, Katie would need a 75 yd head start.