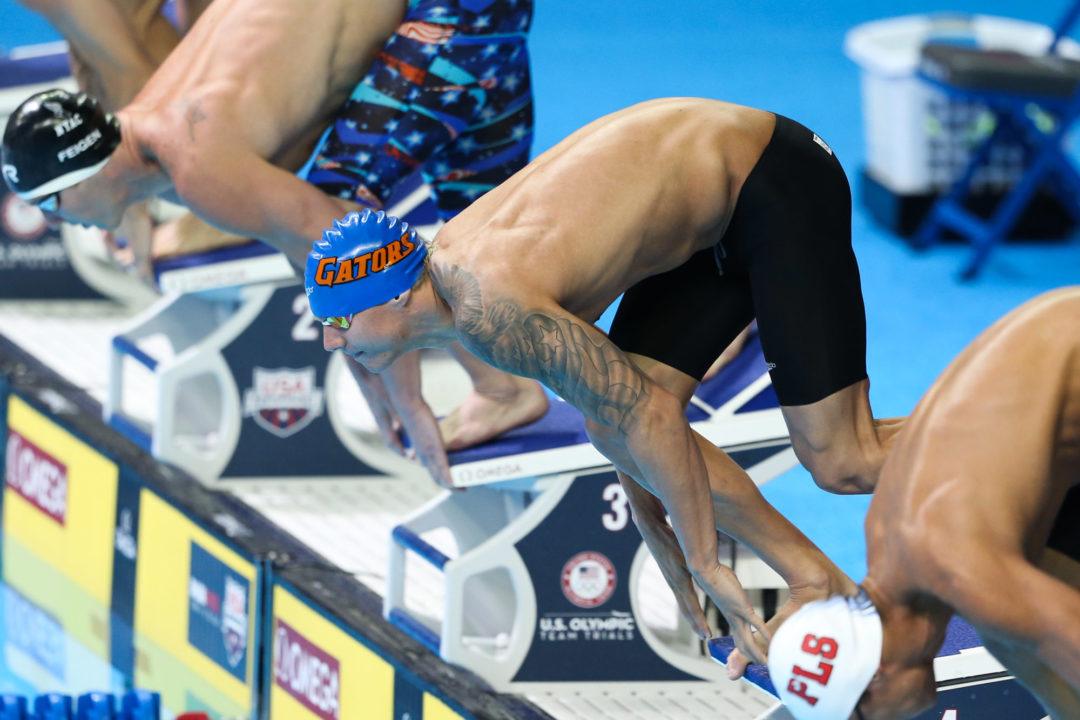 Former club teammates turned NCAA rivals Joseph Schooling and Caeleb Dressel will have their rematch in the 100 fly, though this time it'll go down in the long course pool at the 2017 FINA World Championships. Archive photo via Tim Binning/TheSwimPictures.com

Former club teammates turned NCAA rivals Joseph Schooling and Caeleb Dressel will have their rematch in the 100 fly, though this time it’ll go down in the long course pool at the 2017 FINA World Championships. After swimming the fastest 100 fly ever in textile with his 50.39 to win Olympic gold, Schooling came up short to Dressel during the yards season at the NCAA championships. Dressel has overtaken Schooling as the fastest man in the world this year with his 50.87 at U.S. Nationals, but Schooling isn’t far behind with a 50.96 from Austin Sectionals. Dressel is at a slight disadvantage, however, as he’ll be swimming the final of the men’s 50 free shortly before the final of the 100 fly and, in general, a much heavier schedule than Schooling at the meet.

The most likely man to break up the Dressel-Schooling party is South Africa’s Chad Le Clos, the reigning World Champion in this event. He’s the 3rd fastest man in the world this year with a 51.29. When he won gold in 2015, he set his personal best 50.56. Since then, he hasn’t been able to break 51, as he tied for silver in Rio with a 51.14. He’s nearly been as fast as that already this season, though, and when he goes head-to-head with Schooling and Dressel, he may get that extra push he needs to break the barrier again.

Posting a nearly identical time to Le Clos this season was the USA’s Tim Phillips, who swam a 51.30 at U.S. Nationals. If he maintains or improves on his 51-low, he’ll be in the running for a medal. It’ll be a tight squeeze, however, as a handful of men have been right around he 51-low to 51-mid range, including China’s Li Zhuhao (51.34), Great Britain’s James Guy (51.50), and Brazil’s Henrique Martins (51.57). Zhuhao is the Junior World Record holder with his 51.24 from last summer’s Chinese Championships.

The home crowd will be cheering for Hungary’s Kristof Milak and Laszlo Cseh. International veteran Cseh has been a bit off this season since he took a long break after Rio, but he should be back into the swing of things and in better form in Budapest. He swam a 51.87 in-season, so he should be able to get down to at least the 51-lows with rest. Milak, an up-and-coming junior star, rocked a personal best 51.49 at the European Juniors last month, and should make it into the final if he can replicate that.

DARKHORSE: Schooling’s countryman Zheng Quah was one fire during the NCAA season. If his yards speed is any indication of what he’s got in store for the long course pool, we could see him in the final. His lifetime best is a 52.08 from the Rio Olympics, but a 51-mid to 51-high doesn’t seem like a far cry for him. Singapore will go crazy if they put two swimmers into the same A final.

Although he is (was) arrogant, I hope he has been humbled, and I think Chad Le Clos is a good shot.

Plot twist: Schooling doesn’t qualify for the final just like NCAA 200 fly, Le Clos wins with a 50.44, screams “I’m Number One!” Phelps throws on MP tech suit and steps on the block at Arizona State pool and goes 49.81 breaking his own world record.

My money is on Schooling for the win. Everything else is a toss-up. I’d like to see Dressel take it, but that seems very optimistic. We’ll see.

Been seeing a lot of talk on other articles about how Schooling took time off after Rio, and would like to point out that between Beijing and WC’s 2009, Phelps didn’t do much, either. I think Schooling will be right around, or just under, his 50.39 from Rio.

Attention to Li, he will break the 51 mark. I wuoldn’t be too surprised if he puts an upset

On the paper, Schooling is favored.One predication from swimmingworld didn’t even think Dressel will make a medal. But Dressel could bring surprise, just like what he did in NCAA final. He has been in great shape this year. A little concern is that he has 50free right before 100fly on the same day. Cannot wait to see what a show Dressel can bring up.

I have currently picked Schooling because his schedule is much easier than Dressel’s, but Dressel just seems like such a prime-time performer to me. He always brings his best race when he needs it.

I think save for NCAAs earlier this year, Schooling has more of the ability to turn it on where it matters than anyone else

Darkhorse: Kristof Milak, you just never know at his age, big drops come when you think they couldn’t possibly.

Off topic, but haven’t seen it covered here so thought i’d give you the heads up: No Chris Walker-Hebborn on startlists for 100 backstroke. If he is injured or unwell, that takes a huge amount of excitement out of the medley. Alternatively, he could think he has no chance of a medal individually and is putting it all into the relay. No word from camp as of yet.