2017 Worlds Preview: Ledecky Begins The Road To Tokyo In 800 Free 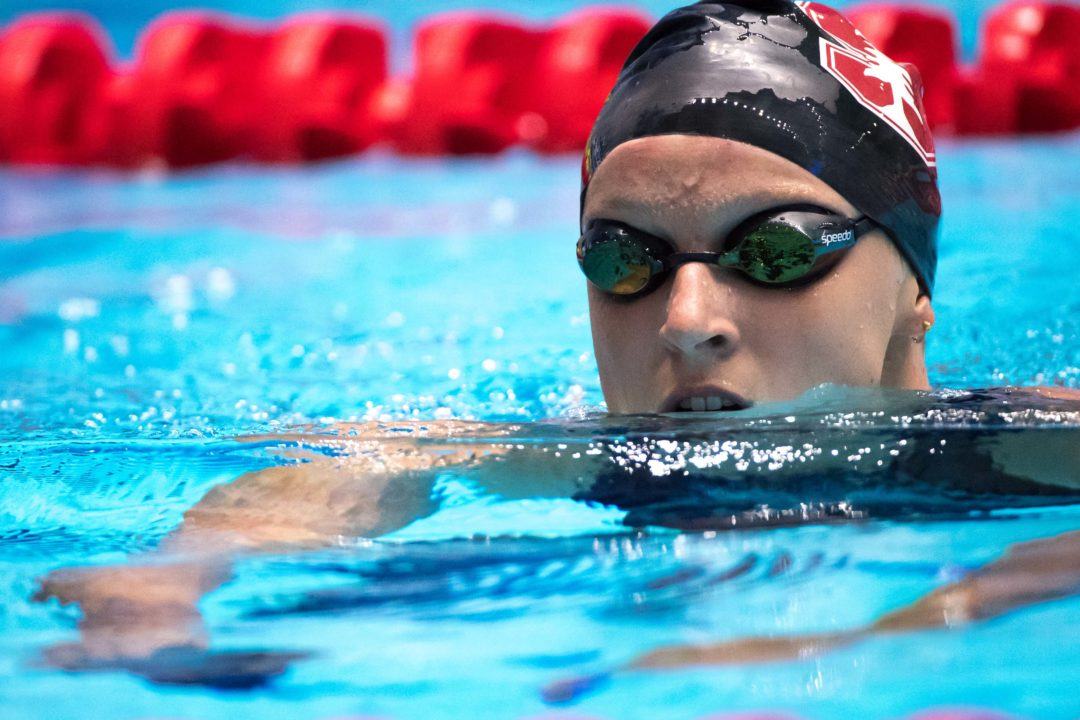 Katie Ledecky has taken any and all precedents of the capability of a female swimmer and thrown them out the window in the five years since she shocked the world in London.

After winning Olympic gold at 15 in the 800 free, Ledecky has been unstoppable, winning seven individual World Championship titles over two competitions before sweeping the 200, 400 and 800 freestyles in Rio.

In her time at the top she’s taken the 800m world record down nearly ten seconds to 8:04.79, and the 1500 record down over 17 seconds to 15:25. She continues to rewrite the history books, doing things that were thought to be impossible not too long ago. So why not strive for the unthinkable?

The 15-minute barrier has long been an elusive one for men in the 1500m free. Is it possible for a woman to hold the same pace over 800m? Why not.

Ledecky has constantly improved since winning in 2012. Heck, she went 8:06.6 out of nowhere at the Austin Pro Swim in January 2016. She improved about ten seconds in the 800 over the last quad, so another five seconds drop doesn’t seem unattainable. Many female swimmers seem to peak in their teens and plateau, but that doesn’t seem to be the case for Ledecky. She’s a different breed of athlete.

While the 8-minute barrier will be one Ledecky will chase throughout the quad, lowering her world record this week in Budapest would be a big swim in itself. After postponing college to prepare for the Olympics, Ledecky started Stanford last fall and went through a ton of adjustments. It doesn’t seem to have affected her swimming much, as she continues to dominate, but breaking her world record of 8:04.79 would be a little unexpected.

After placing 6th in Rio, fellow American Leah Smith will be looking to join Ledecky on the podium this summer. Smith had an incredible trials performance, qualifying to swim five individual events in Budapest. While that was an impressive and somewhat surprising (400 IM?) meet for her, how will it affect her as this competition goes on?

By the time the 800 free prelims roll around on day 6, Smith will have gone through two 400 frees, two 1500 frees, and potentially four 200 frees. She did swim the 200/400/800/1500 and 400 IM at U.S. Trials over just five days, but the distance events were timed finals which makes a big difference. She’s proven to be durable, but this will be her toughest test yet. She did point out at trials that she didn’t taper as much as she did for the 2016 Olympic Trials, and exuded a ton of confidence in her 800 for Budapest.

As will be the case in the 400 and 1500, Smith will battle Hungarian Boglarka Kapas for silver behind Ledecky. The 24-year-old had a breakout performance to win bronze last summer in 8:16.37, making her the 5th fastest performer in history. Her season-best of 8:23.71 was done just a month ago at the Sette Colli Trophy, about 1.5 seconds slower than she was at the same meet in 2016. That indicates she’s in for another sub-8:20 performance.

Like Smith, Spain’s Mireia Belmonte has a nasty World Championship schedule. The reigning 200 fly Olympic champion is the only woman to ever break 8 minutes in the short course version of this event, and won an Olympic silver back in 2012. Her 8:18.55 in Rio was the fastest of her career, and though she’s only been 8:27 this year, she hasn’t had to taper. The only thing that could get in her way is her busy schedule, but assuming she makes it through the heats (which she almost didn’t in Rio, placing 8th), she’ll have a full day and a half to prepare.

Another teenager, Australia’s Ariarne Titmus, is knocking on the door and will join Li at the forefront of the distance events for years to come. While Li was off winning those gold medals at Junior Pan Pacs, Titmus managed a bronze in the 400 free and was 5th in the 800 at 8:37.50. Fast forward to Aussie Trials and Titmus showed over 14 seconds better in 8:23.08, an incredible improvement in such a short amount of time. That swim wasn’t a one-off breakout either, as Titmus also qualified to swim the 200 and 400 individually. She’ll be a finalist, and should challenge the likes of Smith, Kapas, Belmonte and Li for a minor medal.

Some others who will push for a spot in the final include Li’s teammate Zhang Yuhan, Italian Simona Quadarella, and 15-year-old Hungarian Ajna Kesely.

Can agree with the names of prospective medallists but think the times for the minor medals look a tad optimistic given how late in the program this event will be held plus the impacts of other events.

In a few hours we will get first hint what form major players are at. Then it make sense to make predictions.
Ledecky, Sjostrom, McKeon, Smith, Comerford, Belmonte, Smith, Hosszu, Manuel, Worrell, Campbell, Oleksiak, Efimova, Kapas, Li Bingjie – all will be tested on day1

Still 5 previews to go. Come on swimswam we support you!