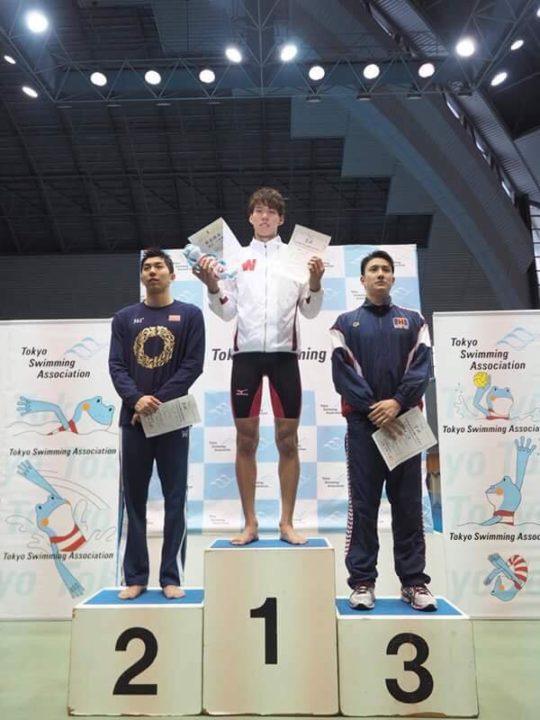 World record holder Ippei Watanabe is fighting for gold in the men's 200 breast in Budapest. Archive photo via ©Junya Nishigawa

The men’s 200 breast continues to be one of the most unpredictable races at major competitions. Last season, Kazakhstan’s Dmitriy Balandin had yet to break 2:09 before competing in Rio. Balandin ended up shocking the world for gold in this race, which was overall somewhat sluggish and well off the world record.

Then, this January, Ippei Watanabe laid waste to the WR with a 2:06.67 at the 2017 Kosuke Kitajima Cup. The Japanese men lead the world this year, with Watanabe well ahead (and rightfully so; he’s the world record-holder) at 2:06.67 and Yasuhiro Koseki 2nd at 2:07.18. Watanabe has had the most rapid improvement over the last year or so– coming into Rio, his lifetime best was a 2:08.8, while Koseki’s was 2:07.7. 20-year-old Watanabe has to be the favorite in Budapest, and the Japanese men are looking good for a 1-2 sweep this summer.

Kevin Cordes is America’s best shot at a medal in Budapest, and he’s looking more in control than he usually has. Cordes hasn’t had the most consistent run in international competition, and he faded to 8th in the Rio final of this race. But, in Indianapolis, Cordes trounced the rest of America’s best breaststrokers in all three distances, highlighted by best times in the 100 and 200 breast and a new American record in the 100. Is Cordes a lock for a medal in this race? No. Most swimmers in this race aren’t locks. But Cordes is hitting his stride this year, and the right race execution in this final could reward him with another medal in this race after his silver in 2015.

Russian pair Anton Chupkov and Ilya Khomenko are back after both semifinaling in this race in Rio. Chupkov was the one through to the finals, earning the bronze in 2:07.70 in a new Russian record. He’s built on that this year, going 2:07.46 to lower his national record, with that time being the exact time Balandin went to win gold last year. Chupkov is very dangerous, and with all eyes on the Japanese, it wouldn’t be out of the question to see him sneak past for gold. Khomenko, meanwhile, was 2:08.09 at Russian Trials, edging Kirill Prigoda by .02 to qualify for Budapest.

It’s hard to decide what to make of Erik Persson‘s Swedish record swim of 2:07.85 from April. He had that huge performance in April at the Stockholm Open to qualify for Worlds, but that still stands as his only 200 breast under the 2:10 mark (he was 2:11 in prelims at the Stockholm Open). He did go a 2:10.02 at Swedish Nationals a couple of weeks ago, which holds up as his second-best time ever. With only one sub-2:10 under his belt, Persson adds intrigue to this race, and he’s Sweden’s best shot at a top finish in a men’s swimming event in Budapest.

A couple of European regulars will be in the running in Budapest, between Germany’s Marco Koch and GBR’s Ross Murdoch. Koch is actually the 2015 World Champion in this race, and he finished with a bronze in 2013 at his first Worlds. He didn’t quite have it last year, touching 7th in Rio, and he only has the 10th-best time this year (2:08.69). Murdoch, meanwhile, is 14th in the world this year (2:09.15) and is back after missing the Rio Games in this event. One of the last few spots in the final, though, looks good for USA’s Nic Fink, who missed Rio altogether but stormed back to make the US team this year with a lifetime best 2:08.63.

And then… Balandin. He’s been a pedestrian 2:14.19 this year, and while he showed last year that you can’t count him out, there’s no indication that he’s in gold medal form (last year he was 2:09.6 in the months before Rio).

Dark horse: Daniel Gyurta. It’s weird not having Gyurta, who broke out at age 15 with the Athens silver medal in this event and then broke the WR with a gold medal in London, in the top 8. He hasn’t come up with a big swim since his bronze in Kazan, but these are his hometown Champs and he’ll want to swim well in Budapest.

Those time predictions you have made are way off. How can you say they will all go slower?

Well we don’t know if they’re “way off” considering the meet hasn’t happened yet. Predictions are just that. They’re predictions.

I feel pretty confident in Persson going sub 1.08 again. Had his best non-taper swims ever at swe nationals. He’s PB’d at like 4-5 taper meets in a row so he really knows how to hit it when it matters.

The medallists will likely be those who can get through to the final without spending all they got. Because I suspect the semis will be plenty fast. Will be a final where lane 8 can medal.

I wonder why there are so many breaststrokers at 2:07. The other strokes aren’t so jammed up around the same time, with the except of all the 1:45 200 freestylers.

Wouldn’t it be a thrill for the USA for Kevin Cordes to win gold AND get the WR in the same race?

His whole career has been building up for such a moment.

Actually, I think the most likely scenario is a stupidly fast semi finals, possibly with a WR, then a finals close to Rio, with a winning time of 2:07.2-.6

WR date is from Yamaguchi’s swim…

Balandin actually had broken 2.08 before Rio, all the way back in 2014 at the Asian Games, going 2.07.67. Wouldn’t call it a surprise that he won in Rio, considering that it was one of the fastest times during the 4 year cycle and how tight the event has been. That being said, and with how another Japanese breaststroke WR holder could not live up to the hype at the next big championship in 2013, I would not count Balandin out.

Cordes SCY time converts to a 2:05. I know he has got it in him. His classic long and strong at Nationals looked awesome. It looks like his time with Sergio is starting to pay off.

SCY is a lot different than LCM. I would love to see him and Licon go 2.05s, but that is very unrealistic at this point.