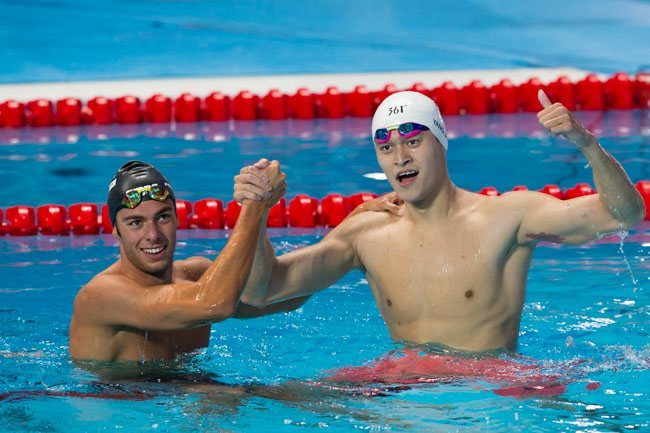 The epic duel between Sun and Paltrinieri from two years ago could happen all over again in Budapest later this month. Archive photo via Tim Binning/TheSwimPictures.com

The men’s 800 free has often been a very exciting race on the world stage.  The best 400 swimmers clash with the best milers, and it usually elicits a very intriguing race. However, there was never as much stock put into it as those other two races as a non-Olympic event. Now that it will be an Olympic event in 2020, the race this summer becomes all the more captivating, with swimmers putting a little more emphasis on it knowing they’re preparing for Tokyo.

There are multiple swimmers who could conceivably walk away with gold this summer. At the last World Championships in Kazan, Sun Yang, the winner of the 400, and Gregorio Paltrinieri, the winner of the 1500, had an thrilling showdown in this race, with Sun’s closing speed earning him the gold.

Last summer in Rio, Sun performed worse as the distance increased, which had never been the case before. Gold in the 200, silver in the 400 and 16th in the mile brought up questions about whether or not he was committed to train for the race in which he won Olympic gold just four years prior. He did reveal he was sick heading into that 1500, and appears to be back on track this year. Even if he isn’t in peak 1500 form, the 800 is still short enough that he’ll be in the race for gold. His best of 7:48.33 this year is solid, and is less than a second slower than he was heading into Kazan, where he ended up going 7:39. He’ll also be looking to keep China’s streak alive, as they’ve won the past four World titles in this event starting with Zhang Lin‘s otherworldly world record of 7:32.12 in 2009.

Paltrinieri and his Italian running mate Gabriele Detti will both be gunning to end China’s reign in the event and begin the shift to Italian dominance in the men’s 800. Paltrinieri’s fastest 800 ever was that race head-to-head with Sun, clocking 7:40.81. His potential problem in this race is that it could be too short for him, if you can believe that. He doesn’t have the finishing speed to out-sprint Sun, or even Detti, so the only way he wins this one is if he has a second and a half or more with 50 to go.

That could very well happen, but Detti’s performance this year indicates this may be his event. At the Italian Championships Detti beat Paltrinieri head-to-head by over 7 seconds, posting a new best and the world’s top time of 7:41.64. He’s also ranked 2nd in the world in the 400 to Sun, and 2nd in the 1500 to Paltrinieri. He may just have the perfect combination of speed and endurance to take out the two more established stars in this race.

400 free Olympic gold medalist Mack Horton also has the potential to jump up and challenge those three for the top spot. Despite suffering from a parasitic bug in Kazan, Horton still won bronze in the 800. He’s seen such great success in the 400, and has been as fast as 14:39 in the mile, so a big drop in the 800 wouldn’t be a shock. His times from Australian Nationals indicate he may not have tapered as much as in the past, either that or he’s a bit off pace this year. He’ll be in the heat of the battle.

Korean Park Tae Hwan had a massive performance at the Short Course World Championships in Windsor, winning gold in the 200, 400 and 1500 freestyle in impressive fashion. This raised questions as to whether or not he would make a run in the 1500 at Worlds, and if that was the case he’d likely also take a shot at the 800. However, upon the release of provisional entries on the FINA app, Park has opted not to enter the 800. However, he’s still entered in the mile, along with the 100, 200 and 400.

Who else figures to be in the final? The European trio of Henrik Christiansen, Wojciech Wojdak and Mykhailo Romanchuk are all virtually the same age, either 21 or turning 21 this year, and are quickly on the rise. Christiansen and Wojdak were finalists in this event two years ago, and Romanchuk made it through to the final in the 1500. Like Park, Romanchuk has surprisingly opted out of the 800, choosing to solely focus on the 1500 which comes at the end of the competition. Christiansen and Wojdak, however, will be very dangerous in this event. They’re ranked 4th and 5th in the world this year, and though they may be a year or two away from medaling, will be forces to reckoned with in the distance events for years to come.

Americans Clark Smith and Zane Grothe had a back and forth duel at U.S. Trials, with Grothe winning the 400 and Smith the 800. They both clocked in at 7:50 in the 800, which was a best for both, but they’ll likely need to be faster to make it through to the final in Budapest. They’ve both arguably had the best seasons of their lives. Smith won a pair of NCAA titles, both in American & NCAA Record fashion, and Grothe has been posting fast times all year, including that breakout 3:44.4 in the 400. They’ll be in the thick of the battle for a spot in the top-8, but a finals berth for either is from a certainty.

China’s Qiu Ziao has shown steady improvement the last few years and now sits 9th in the world at 7:52.69. Prior to that swim he had never broken 8 minutes, and at just 18 more improvement will likely be on the way.

Australian Jack McLoughlin holds the 10th fastest time of the year, but with his added open water focus likely won’t have the speed to final. Jan Micka (CZE) and Gergely Gyurta (HUN) have always been better at the mile, while Austrian Felix Auboeck could slice off a large chunk from his 21st ranked 7:55.86 after his performance in the NCAA this season as a freshman.

Dark Horse: Akaram Mahmoud of Egypt just missed the final in this event two years ago in 9th, and has an NCAA runner-up and 3rd place finish (in the 3rd fastest swim of all-time) in the 1650 in the two seasons since. He’s only been 8:07.35 this long course season, but is capable of going sub-7:50.

The men’s 800 is by far the toughest WR in the books. You’d have to go 3:46 flat on back to back 400’s to break the WR and that won’t happen for at least another 20 years, thanks to the advance of suit tech then the subsequent banning of the tech. Clark Smith swam an 8:33 SCY 1000 in a small meet a few months back and yet he still can’t break 7:50 in LCM? Very strange.

Also another oddity: the analogous race to this in track is the men’s 3000 and that is also by far the toughest track WR in the books (that one because of an suspected EPO-enhanced Daniel Komen who never got caught). It’s equivalent… Read more »

The official 2nd fastest time is Mellouli’s 7:35.2 also from Rome in the rubber suits (Zhang out split him by 2.5 seconds on the last 50 in that race). Only those five men have ever broken 7:40.

Hopefully in this quad we’ll see some guys start to get down closer to 7:35 in preparation for the inaugural Olympic 800.

That swim is just ridiculous, he basically held 7:35 pace (3 seconds faster than the WR at the time) the entire race along side Mellouli, then, while Mellouli didn’t have another gear the last 50, Zhang causally goes 25.99 on the last 50.

The race is hard to find on the internet, and I’m pretty sure no english version exsists, but go watch it. Basically Mellouli amd Zhang are neck and neck the entire race, them with 25 meters to go Zhang goes Super Sayan and Hydrofoils over the water pulling a 2 body length lead.

Ultimately I think FINA made a wromg decisions with the super suits. Really the technology was naturally progressing and FINA was ok… Read more »

The 800 was almost a sprint that one day in 2009. https://www.youtube.com/watch?v=LlvMExUNSNU

That WR may not be broken for another 20-40 years.

The suits certainly had a massive impact on men’s freestyle events. Sub 21 and Sub 47 in the sprint events, and then there’s Biedermann’s 200/400 records while this one might be the craziest one of all.

Now zhang lin swam a 7:32 but the women,s race was won in 8:15:92 by lotte friis. Rebecca addlington who would later hold the world record in a 8:14, finished fourth in… Read more »

Detti is a fast closer. He ran down Dwyer and Jaeger in the 400 free in Rio to get the bronze. He was chasing Jaeger so hard at the end of the 1500.

That could make for a wild last 100 with everyone sprinting and kicking.

My pick is Detti, but Horton is a mean contender. I would hate to see a cheat get a medal, so let’s hope Paltrinieri or someone else who is not Sun gets the bronze behind those two. This is going to be an interesting race anyway.

I think this is Detti’s ideal distance, perfect stroke & balance between speed and endurance.

I’m not sure what to expect from Paltrinieri south of 1500m after his OW exploits. That adds a little expectation. I like sneak bronze for a youngster, too.

I agree. It’s time for a Worlds medal for Christiansen after placing 5th in this event 2 years ago, which was actually his first senior champs breakthrough. He has focused more on strength and conditioning after the Olympics, and I think we will see him with a slighter more powerful stroke than before.

These usernames are getting better and better.

Detti was great in 2016, and so far in 2017 he has only impoved. I think the 800 will be his best event, as it falls right between the 400 and 1500. I think Paltrinieri is taking this year slower than last, where he peaked sometime between Euros amd the Olympics. I think he’s trying to avoid that this uear and peak soley for worlds. Patrinieri needs to get a huge lead in the middle of the race, as basically everyone else in the finals will have a better last 50 then him. I think ever since 2014 sun has been moving away from his distance base and more towards the 200 and 400. I don’t think he’ll get under… Read more »